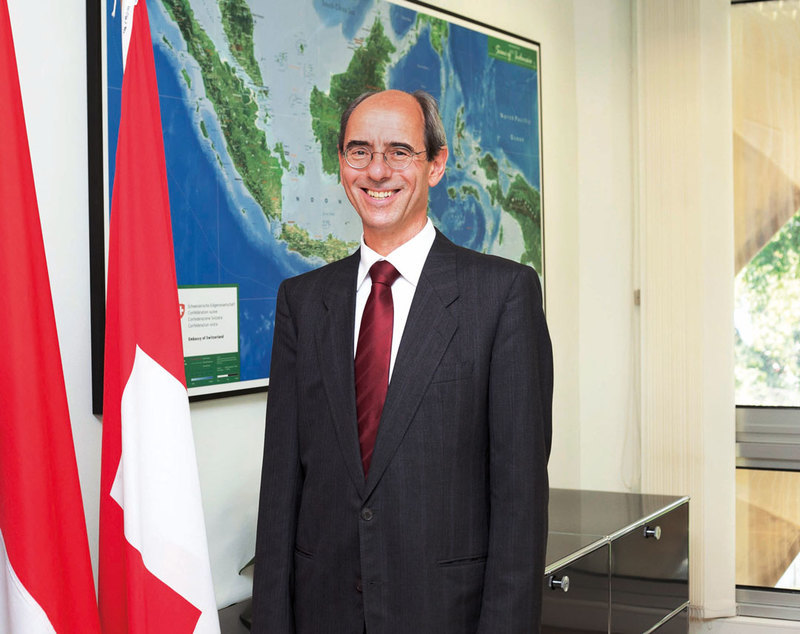 Switzerland’s Ambassador to Indonesia went online with Alistair Speirs for an exclusive video interview discussing lessons learned by the Swiss from Covid-19, overcoming the challenges, and His Excellency’s best memories so far after two years of serving in Indonesia.

In this edition of NOW! Jakarta we publish different aspects of the Swiss Embassy’s work. It seems that Indonesia receives a lot of attention from Switzerland. Am I right?

You are right, and thank you very much for the opportunity to present these contributions in the month when we celebrate our National Day.

The setup of our Embassy matches our relations with Indonesia and the potential we see in them. And we also take care of relations with ASEAN and Timor-Leste.

Relations with Indonesia are important to us since long ago. In 1868 Switzerland opened a Consulate in Djakarta, one of Switzerland’s oldest posts abroad. Diplomatic relations were established in 1951, and Switzerland’s development cooperation set in in 1972. The Swiss legacy in the field of Vocational Education and Training is considerable – to some, the POLMAN Bandung and STP Bandung still ring a bell – and apparently contributed to long-term systemic impact and changes in the sector. My colleague, Philipp Orga, tells you more about our bilateral economic cooperation with Indonesia, one of Switzerland’s biggest such programs in the world.

Trade relations have always been strong. There are around 150 Swiss companies established in Indonesia. They are strong investors – last year Switzerland was the 4th largest European investor – and they create 50’000 jobs. We are aware that the economic and investment potential is by far not fully used. This is where the Swiss Business Hub comes in with its support to SMEs from Switzerland and Liechtenstein to understand the Indonesian market and to connect with suitable local business partners.

We also publish about tourism. What do Swiss people know about Indonesia? How is this country perceived in Switzerland?

Indonesia is considered with great esteem in Switzerland. Its culture and people are appreciated for their diversity and friendliness. Angklung Orchester Pada Suka in Zürich is a good expression of that. The orchestra was founded in 1980, promotes traditional and Indonesian music in Switzerland and dedicates its proceeds to selected aid agencies in Switzerland and Indonesia. The joint playing of Angklung and Alphorn is a special highlight and a bridge between Indonesia and Switzerland.

In Sion, in the middle of the Swiss Alps, there is a music school which teaches Gamelan (www.123musique.ch/Actualites/Gamelan.html) and a Gamelan orchestra which tours regularly.

This summer and fall, the Museum Rietberg, also in Zürich, is exhibiting the Javanese Shadow Theatre "Stories about Life and the World".

There is an eagerness to know each other better, and Indonesia – mainly Bali, but also other destinations in the archipelago – receives many Swiss tourists. More and more Indonesian tourists discover Switzerland. The advent of Covid has brought things to a temporary halt.

We know about Indonesia’s location on the “ring of fire”, about earthquakes, tsunamis, and erupting volcanoes. Switzerland has always been a trustful partner in times of need, as was the case after the tsunami in Aceh in 2004 or in Lombok and in Palu 2018. There is a reliable feeling of solidarity which we will continue to care for in the future.

Talking about crises: Covid-19 is at the forefront of our worries. What lesson is there to learn according to Switzerland? How have the Swiss companies operating in Indonesia fared? How has Switzerland responded to this global crisis?

Switzerland has been strongly affected by Covid-19 and extraordinary measures have been taken. The Federal Council decided on a comprehensive package of measures worth over 60 billion US$ to cushion the economic consequences of the spread of the corona virus. The measures aim at different target groups and contribute to avoid layoffs, to maintain employment, to secure wages and to assist the self-employed.

Covid makes us aware of how much we depend on each other. And again, the pandemic demonstrates the importance of a strong and reliable multilateral system. Together with Indonesia and other partners, Switzerland presented the draft resolution “Global Solidarity to fight the COVID-19”, which was adopted by the UN General Assembly on 2 April. On the 75th anniversary of the United Nations in June the Swiss Foreign Minister strongly voiced the need of a coordinated response in order to overcome such crises together.

The Swiss Government decided end of April to support international appeals in connection with the fight against COVID-19 and its consequences with a total of around 400 million Swiss francs. Thanks to such support, the Office of UNDP in Indonesia has been able to redeploy resources and to receive additional funding from UNDP Headquarters to address to development challenges caused by COVID-19. Several Swiss companies in Indonesia graciously donated either financial contributions or offered other substantial services, mainly to combat the economic impact of COVID-19.

According to a survey made in May by the Swiss-Indonesian Chamber of Commerce, around 40% of the responding members intended to invest about the same amount as planned in 2020 and 2021, mainly from the consultant, legal services, chemical and pharmaceutical industry. Companies in the fields of construction and real estate, manufacturing and engineering technologies, Fast-Moving Consumer Goods and several other sectors, around 35%, intended to invest somewhat less. Travel, trade and distribution services and hospitality sectors (22%) are the hardest hit by the pandemic restrictions and intended to invest much lower (40% less). On the other side, healthcare and laboratory sectors were planning to invest even more than before.

So, your lessons learned would be: “a strong and reliable multilateral system”. Indonesia is certainly a good partner on this topic…

Yes it is. The shared commitment for multilateralism is something that very much binds us together. A strong, reliable and rules-based multilateral system is a necessity to address global challenges. Geneva plays a crucial role in this and we are aware of Switzerland’s special responsibility.

Indonesia plays a strong role at the international level through its membership 2020-21 in the UN Security Council as well as its memberships in the UN Human Rights Council and in the ECOSOC. Switzerland is presenting its candidacy for a non-permanent seat on the Security Council for the first time for the 2023-24 period. We want to help secure a peaceful, rules-based international order and make multilateral bodies more efficient.

Jakarta is also the place where we cooperate to strengthen the multilateral system at regional level. Switzerland is a Sectoral Dialogue Partner of ASEAN where we focus on human security; vocational education and training; climate change and disaster management. Also in ASEAN we have a strong feeling of shared values with Indonesia, especially when it comes to human rights.

You certainly not only cooperate on multilateral issues with Indonesia. What is going on at the bilateral level?

There is a lot of common ground between Switzerland and Indonesia and we are committed to further strengthen it. The Comprehensive Economic Partnership Agreement, signed by EFTA States and Indonesia in late 2018, is but one example.

A Switzerland-Indonesia Mutual Legal Assistance Treaty has been signed. It has been ratified by the Indonesian Parliament on 14 July; in Switzerland, the parliamentary process is still ongoing. A Bilateral Investment Protection Treaty between Switzerland and Indonesia is being negotiated, and we strive for updating our bilateral Agreement to avoid double-taxation.

We read that the CEPA will undergo a public vote in Switzerland. What is all about?

The CEPA has been approved by the Swiss Parliament. Direct democracy and the possibility of the concluding check through a popular vote on substantive issues is a key element of the Swiss political system. This is what is happening with the CEPA, where over 61’000 Swiss citizens have successfully called for a public vote.

For Switzerland, the voters will have the last say. Debates will be controversial and pros and cons will be pondered. We will know the result probably during the first half of next year. If the CEPA is approved by the public vote, its legitimacy will be very strong.

After two years in Indonesia, please tell us something that impressed you particularly.

When we visited Banda Aceh in early February, we were told that the number of victims of the 2004 tsunami was so high because the population had never heard of a "tsunami" or even learned to save itself in higher areas. On the island of Simeulue, on the other hand, there were hardly any victims, since the islanders have been singing a children's song since time immemorial, which calls to seek protection on the hills when the sea recedes - because a big wave will follow.

I am impressed how life-saving wisdom can be transmitted over generations by easy and joyful means, once they enter our day-to-day life.

‘What Makes a City Liveable’, with Architect and Urban Observer Alwi Sjaaf

Hariyadi B.S. Sukamdani: Vaccinations and The Return of Tourism and Business!