An Interview with Alexander Nayoan Chairman Of The Jakarta Hotels Association

Alexander Nayoan is a busy man, not only as the Managing Director of The Dharmawangsa Jakarta, but also as Chairman of the Jakarta Hotels Association (JHA). Fortunately, he still found time in his hectic schedule to speak to NOW! Jakarta about his role within the association and what kind of challenges the hotel industry in Jakarta faces today. 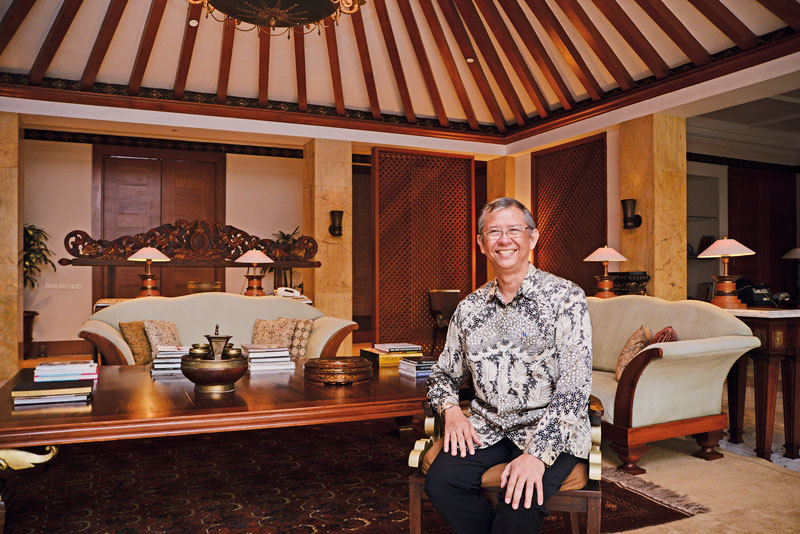 Could you tell us a little bit about your background?
I studied management at Parahyangan University in Bandung and started my career in the hotel industry as a management trainee with the Oberoi Hotel. After working with them for almost seven years, I moved to the Japanese chain The Imperial Hotels and later on joined Four Seasons, where I stayed for almost 15 years. I have been with The Dharmawangsa Jakarta for 8 1/2 years now. Throughout my career, I have been working in various departments and positions in order to move forward. I joined the JHA when I came back to Jakarta and was appointed Chairman last year.

The JHA started as the Casa Grande Group in both Bali and Jakarta, and each group at the time consisted of 5-star international hotels. They eventually changed the name into Jakarta International Hotel Association, but when more and more 5-star and 4-star hotels joined, many of which were Indonesian-owned or managed by Indonesian companies, the word “international” was dropped.

What are JHA’s main activities?
Currently, the association has 43 members, mainly 4-star and 5-star hotels as well as one 3-star hotel. We assist one another and help each other out and feel that as a group, our voice is stronger if there are any problems with other organizations or the government, for instance. Let’s say, there is a lack of salmon or cheese or meat in the city, we will come together as an association and talk to the authorities and suppliers.

The association also supports the activities by the tourism and government agencies and works closely with other organizations, such as the the organization of HR Managers, Sales Managers and the MICE Association.

We engage in social activities for charitable courses - we once held a golf tournament and donated the proceeds to charities, and we also worked together with Habitat for Humanity in the past.

There is also a lot of paperwork that we take care of. Let’s say the government puts out a new regulation, but it usually isn’t delivered systematically to all concerned parties. Sometimes, it only reaches a handful of hotels. We help to distribute it to the others and also often have to translate since most of the hotel managers in Jakarta are expatriates and don’t speak Indonesian fluently.

Besides that, we organize competitions and workshops. One of our competitions, for example, awards the Best Hotel Employee with a trip to Barcelona, where he or she will be able to attend a short course.

As Chairman of JHA, do you have any specific tasks?
Basically, I am leading our team and make sure that everything is channeled properly. I oversee the finances and staff development, marketing and ensure that our activities, both internal and external, run smoothly. I come up with fresh ideas to create new programmes. Furthermore, I am the prolonged hand of the government as well, and help them to successfully implement their programs.

How is the current situation of the hotel industry in Jakarta?
I will be honest, it could be better. We do face a couple of challenges because there are too many hotel rooms within the city and the surrounding areas of Bogor, Depok, Tanggerang and Bekasi.

There has been a great increase of 2- or 3-star business hotels in this area over the past years. Unfortunately, too many of these hotels are being built, and therefore, their rates are dropping which in turn also drags down the rates of the 4- and 5-star hotels.

Our homework is to figure out how to get the rates and occupancy up again. At the same time, we have to try to convince the government that they need to help us as well, possibly by promoting Jakarta as tourist or MICE destination, because the more people come to Jakarta, the better it is for the city’s economy. Everyone has to work together through this new development.

Are you optimistic that better times will come soon?
Of course. Life has its ups and downs, and this is also true for the hotel industry. We have been down, but we are now on the verge of going up again. I can’t say for sure how high we will go this time. 2012 was actually one of the best years for us, whereas last year was the worst. For this year, people in our industry are actually quite optimistic. A few of the hotels are already recuperating.

It is expected that the plans for a new and improved infrastructure in Jakarta will give Indonesian economy a boost, and more companies will open offices in the city. The MRT and new toll roads will reduce the traffic, and Jakarta will become a better city and more attractive for visitors, which will increase the occupancy in the next few years. At the moment, however, we have to face the problem first and accept that the occupancy is affected.