An Interview with H.E. Jean-Charles Berthonnet, The Ambassador of France to Indonesia

Ambassador Jean-Charles Berthonnet arrived in Indonesia in October last year, but even though he is still relatively new to the country, the veteran diplomat has a lot on his plate already - especially since Indonesia and France have agreed on plenty of new projects as the result of French President Francois Hollande’s visit to Jakarta at the end of March. NOW! Jakarta recently talked to the open-minded Ambassador about the relationship between the two countries. 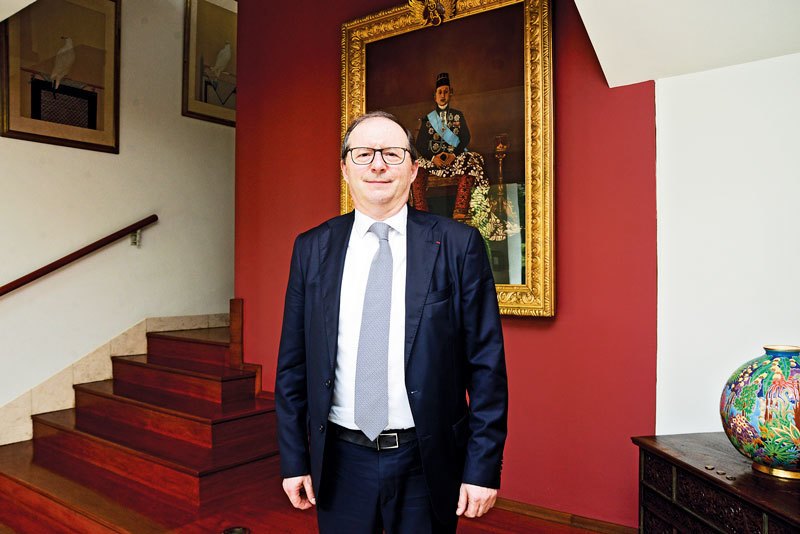 How do you like Jakarta and Indonesia so far?
Indonesia is a very interesting country by its size, its diversity and its dynamism. I have already visited several places like Bali, Yogyakarta, Surabaya and Medan, but I would very much like to explore more of Indonesia. With thousands of islands and ethnic groups, Indonesia is very attractive, and I am keen to better understand the way this country functions. I have a very good team around me, both from France and Indonesia, which really makes my work here much easier.

The most important agenda of the Embassy so far this year was the visit of French President, Francois Hollande. Could you tell us more about the main results of this visit?
First of all, I appreciated the helpfulness of our Indonesian counterparts during the preparation of President Hollande’s visit last month. We are of course quite happy that the event was a success. 35 agreements were signed, which will lead to investments of up to 2.6 billion dollars in Indonesia. This implies a promising future for bilateral relations between Indonesia and France. Both Heads of State, President Hollande and President Jokowi, discussed of political cooperation, including how to improve our work in environmental diplomacy. This is especially important because Indonesia has ratified the Paris Climate Agreement last year, and the country has the wish to increase the share of its renewable energies. We are working on several projects at the moment to help Indonesia achieve this goal. The President also expressed his commitment to help Indonesia overcome the challenges currently faced by its palm oil industry as it is an important issue here. President Hollande put forth several proposals in the defense sector, for which Indonesian government expressed its interest.

Three MoUs were signed in the creative economy sector to promote collaborations in fields such as cinema, fashion, digital industries, as well as video games. I’m also happy to announce that an Indonesian film will be aired next month in Cannes, and we are looking forward to a closer partnership between our national film industries as France’s National Center of Cinematography and the moving image (or CNC) has signed an agreement with BEKRAF to increase the exchange of culture and knowledge in this field. These are relatively new and dynamic sectors undergoing a rapid development, and President Hollande expressed his excitement to see the implementation of these projects. I think Indonesia and France already have solid relationship, the President’s visit undoubtedly strengthened the ties between the two countries.

In addition to bilateral cooperation, the Presidents’ meeting also resulted in agreements on international issues. Could you tell us more about this?
Yes, the other topics that were discussed during the meeting were international issues including the Middle East peace process. France and Indonesia share the same view when it comes to the necessity of supporting a Palestinian state, so we will continue our struggle to bring peace between Palestine and Israel based on a two-state solution. We also currently face the common threat of radicalism and terrorism, and we are keen to jointly promote the values of tolerance and dialogue.

How is the current French investment climate in Indonesia?
France has made a lot of direct investments in Indonesia. Our aeronautics sales to Indonesia are currently strong due to the rapid development of the air transport industry in Indonesia which requires a fleet of increasing importance every year. Outside of the field of aeronautics, we would like to bolster exports in cosmetics and agriculture in the future. We also have a considerable of companies operating in Indonesia in sectors such as renewable energy, tire manufacturing, and so forth.  In general, French companies in Indonesia are happy with their business activities here. Of course, there are always problems here and there, like the complicated work permit procedure for expats and unexpected changes of regulations from time to time, which can be difficult to cope with. Companies will want to see a stable legal framework before investing for the long term, so I think this is something that could be improved in order to attract more business. Other than that, I see a bright future of trade and investment relations between Indonesia and France. Indonesia’s economy is growing, representing 40 percent of GDP in South East Asia. With its large population and a growing middle class, Indonesia is undoubtedly a strategic partner for France.

We noted that French delegations established French Renewable Energy Group (FREG) in February. What is the significance of this project?
One month before President Hollande’s visit, French Minister of Foreign Affairs, Jean-Marc Ayrault came to Jakarta to meet the Minister for Energy and Mineral Resources, Ignasius Jonan. Both ministers launched the French Renewable Energy Group (FREG) in order to promote more concrete projects in the energy sector. Indonesia has the ambitious goal to increase the use of renewable energy sources to 23 percent of the national energy mix by 2025. FREG is expected to enhance business-to-business contacts between French and Indonesian companies and to encourage more French renewable energy companies to invest in Indonesia. However, in order to ensure the sustainability of this programme, we need support from the Indonesian authorities. Their backing is essential to the viability of renewable  energy projects which cannot yet compete with core power stations and thus generate  electricity at slightly higher cost than average.

What are your professional goals and aspirations for the next 12 months?
The important thing for me now is to follow up on all the decisions and agreements made during President Hollande’s visit and certainly to continue strengthening the bilateral relations between France and Indonesia. On a personal note, I would like to get to know Indonesia better by exploring places like Papua, Sulawesi, Sumatera and many more.