Joseph R. Donovan Jr., a career member of the Foreign Service, Class of Minister-Counselor, was sworn in as United States Ambassador to the Republic of Indonesia in November 2016. The Ambassador spoke to NOW! Jakarta about the U.S.-Indonesia relationship and his personal goals during his time in Indonesia. 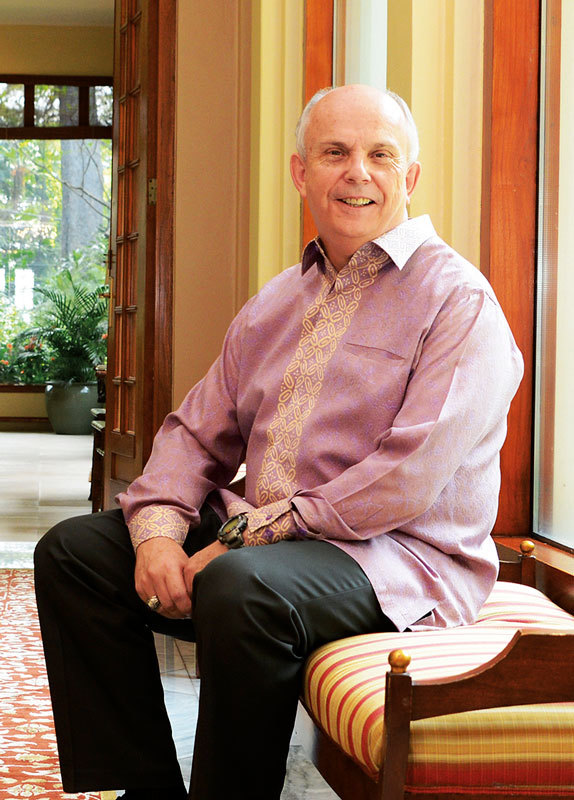 The U.S.-Indonesia relationship has been very good until quite recently with many strong partnerships in place. How would you characterize the current situation after the election of President Trump?
The United States and Indonesia enjoy excellent relations, built on shared democratic values and common interests.  I can say with confidence that Indonesia will remain a strong, strategic partner for the United States and I will be working to further deepen our relationship. As you know, President Jokowi and Vice President Kalla graciously welcomed Vice President Pence during his April visit to Indonesia. As Vice President Pence made very clear, the Trump Administration is firmly committed to our Strategic Partnership with Indonesia and has a deep respect for Indonesia’s democratic achievements and its practice of moderate Islam. Our two countries are working towards many of the same local, regional and global goals. During my tenure here in Jakarta, I will be working to promote trade and investment that creates jobs in both of our countries, a greater number of Indonesian students studying in the U.S. as well as U.S. students studying in Indonesia, and increased cooperation to address issues of global concern.

Has the Trump Administration’s insistence on the travel ban affected the relationship in any way?
First, let me clarify: the Executive Order on Immigration does not affect Indonesian citizens. There is no ban on Indonesians traveling to the U.S.  The United States is a great place to visit and we welcome Indonesians to visit our country. The Executive Order was aimed at increasing the security of our borders, and the safety of American citizens, and ensuring that individuals who could pose a threat to our country are identified and are not allowed to enter. Every country has a right to control its own borders, and every government has a responsibility to protect its citizens, including through increases in border security and screening. We continue to review our screening and vetting procedures in order to both welcome visitors and identify those few individuals who could pose a threat to the United States.

What did Presidents Trump and Jokowi talk about on the sidelines of the G20 meeting?
During their meeting at the G20 Summit, Presidents Trump and Jokowi emphasized their commitment to strengthening the United States-Indonesia strategic partnership, which is grounded in the interests and values shared by two of the world’s largest democracies. They discussed ways to expand fair and reciprocal trade between the two countries, and ways to strengthen defense cooperation. The two leaders also underscored their resolve to defeat terrorist networks in Southeast Asia and around the world, and emphasized the importance of isolating terrorists from financial and ideological support. Presidents Trump and Jokowi also pledged to continue to coordinate closely on other threats to international security, including North Korea’s nuclear and missile programs.

What are the most positive elements of the relationship today? And the most challenging?
Relations between the United States and Indonesia are stronger than ever before.  We enjoy excellent relations in many areas, including trade and investment, education, defense, and people-to-people ties. Through the Strategic Partnership, we are continuing to further expand these areas of cooperation. This cooperation is founded on our shared values, including tolerance and mutual respect, and a commitment to democracy and democratic governance. As we celebrate anniversaries of both American and Indonesian independence in July and August, we are reminded of the enduring qualities that bind us together and are enshrined in our national mottos, E Pluribus Unum and Bhinekka Tunggal Ika, both celebrating our rich diversity and meaning “out of many, one.”

As Vice President Pence discussed during his very substantive conversations with Indonesian leaders in April, we think we can do more to ensure trade and investment relationships that are free and fair, that spur job creation and economic growth for both parties. During that visit, American and Indonesian businesses signed over $10 billion in trade and investment agreements, a signal of the appetite on both sides for stronger economic ties. We will continue to work to open opportunities for mutually beneficial engagement that provides benefits to both of our countries.

USAID has been a major contributing factor for 50 years in Indonesia. Are they still providing assistance? In what way?
The United States and Indonesia have a long and successful history of development cooperation. Our work has transformed from a traditional donor-beneficiary relationship to one that is based on a partnership and shared interests. Through the U.S. Agency for International Development (USAID), the United States partners with Indonesia to achieve mutual goals of security and prosperity. USAID values our work with Indonesian government and non-government partners to help consolidate Indonesia’s impressive democratic gains. Key focus areas include helping to increase accountability and transparency, protecting rights of citizens, and supporting an engaged civil society.

USAID is improving the business climate in Indonesia by reducing barriers to market entry, streamlining regulatory requirements, and combating corrupt business practices. This helps open and sustain long-term market opportunities. We collaborate with the Government of Indonesia to improve access to quality basic services. USAID-supported programs help improve maternal and newborn care and provide access to water and sanitation facilities to approximately 2.5 million Indonesians living in urban areas. We also support vocational training and provide scholarship opportunities to Indonesian youth to earn advanced degrees in Indonesia and the United States. USAID partners to stem the spread of infectious diseases and support the Government of Indonesia’s efforts to build its resilience to extreme weather events and natural disasters.

By partnering to support the country’s most poor and vulnerable and helping to build a more stable, resilient, democratic Indonesia, we strengthen both our nations’ national security and protect our shared economic interests.

Have all the challenges facing Freeport been safely handled? Is the mining/energy sector ready to make a comeback?
PT Freeport Indonesia is one of the largest employers and taxpayers in the country, with over 25,000 employees and contractors and over $16 billion in direct payments to the Indonesian government since 1991. We are closely following Freeport’s negotiations with the Indonesian government and encourage a win-win solution. A positive outcome would provide economic benefit to Indonesia and highlight the country’s global competitiveness.

The United States government and American companies are committed to helping Indonesia meet its energy goals.  With low global commodity prices, countries must work harder to incentivize innovation and investment.  We continue to work with Indonesia to help develop these policies and to share best practices on the most affordable and sustainable energy solutions.

Are the “Digital Giants” such as Microsoft and Facebook comfortable with the current Indonesian administration and its regulations? Uber certainly is not. What is the U.S. government’s view on these sectors?
The Jokowi administration has made the development of the creative and digital economy a priority for Indonesia. Certainly, Indonesia’s digital economy presents numerous opportunities for domestic and foreign firms, with some studies finding that Indonesia may have as many as 215 million internet users by 2020, making it the fourth-largest digital economy in the world, and that the value of Indonesia’s e-commerce market may be as much as USD 46 billion by 2025.  In order to capitalize on this growth, however, Indonesia needs to create a business environment that encourages innovation and investment. It’s no secret that countries have to compete for investment, and the countries with policies that welcome foreign firms will win that competition. We are concerned that regulations that limit foreign investment, impose local content requirements on products, and restrict cross-border data flows send a clear, negative signal to potential investors about Indonesia’s economy. We encourage further economic reforms that will open up Indonesia’s digital economy and lead to greater economic opportunity for U.S. and Indonesian firms.

What are the issues you are personally concentrating on? What are you most enjoying about life in Indonesia?
I am excited to be in Indonesia and am looking forward to serving in this amazing country for the next three years. I’ve already visited places like Solo, Surabaya, Medan, Pontianak, and Jayapura and I look forward to visiting many more places throughout Indonesia. I have also had the opportunity to go diving and experience the beautiful marine life that exists in Indonesia. During my travels, I have tried many traditional Indonesian dishes from Soto Betawi to Nagasari. I am looking forward to strengthening the already solid Strategic Partnership that was founded when President Jokowi visited the U.S. in 2015 and reaffirmed during the visit of Vice President Pence in April this year. I am deeply interested in encouraging students and professionals to learn more about each other through educational and professional exchanges.