An Interview with H.E. Kyle O'Sullivan Ambassador of Ireland to Indonesia

Ambassador Kyle O’Sullivan came to Asia for the first time in 1988, when he worked in Hong Kong and later in Beijing for a couple of years. After short stints in Dublin and spending some time in the Middle East on various jobs, his first Ambassador post saw him relocate to Nigeria, West Africa. When the Irish Embassy opened in Indonesia 2 1/2 years ago, he moved to Jakarta together with his wife and children. 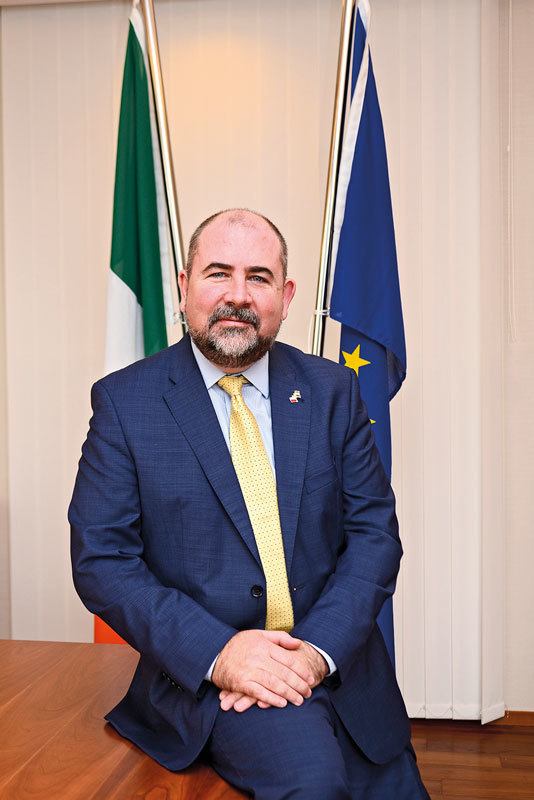 The friendly and humorous Irishman spoke to NOW! Jakarta about the relatively new ties between Ireland and Indonesia, the embassy’s work in the fields of tourism and education and the challenges Ireland will face from the Brexit.

How far does the relationship between Ireland and Indonesia go back?
Not very far, actually. We are one of those countries which have had a very light history with Indonesia. Ireland historically traded with Malaysia, Singapore and the Philippines, with China and Australia, but Indonesia is a new partner for us. Looking at historical links, there have been a few visitors and missionaries from Ireland here over the years, and some traders in and out. The best known and longest-standing Irish product is probably Guinness. But up until recently, we did not have much of a presence here and also not much of a history, so I guess we are the new kids on the block.

What made the Irish government decide to establish a presence here?
We were aware for a long time that we should have an embassy here.  Jakarta was one of the gaps in our network. We knew that there are a lot of opportunities here for Irish companies and universities that we were missing. Back in 2013, as we were coming out of an economic and financial crisis in Ireland we thought that the time had come to turn up in the places we need to be, so we opened up here in 2014.  We had also been working closely with Indonesia in the United Nations.  We both have peacekeeping troops working side by side in Lebanon at the moment.  But frankly, Indonesia is too important for us not to be here, whether it is in politics or economics or culture.   So it is all still new for us, starting with the basics, and building up.

How are you adapting so far?
Jakarta is a great city to live in. It’s a world city, very big, very crowded.  But everything about living here is better than we expected. When you tell people that you are moving to Jakarta, everybody refers to the traffic, the heat, the air pollution. And although everything I have been told is partly true, in reality it is much better.  What I heard before coming here was a bit of an exaggeration. Setting up the embassy took a bit of time, but the Indonesians are easy to work with.

What are your main areas of interest in Indonesia?
What we need to do here is to introduce Ireland to Indonesia, so our work is a lot about profile-building and letting people in Indonesia - government, business and education - know who we are and what we do and where there would be some possibilities for mutual benefit. At the moment, we focus a lot on tourism and education which are usually the fastest ways to introduce a country.  Trade and investment sometimes take a little bit longer. Tourism has picked up a lot, in both directions, and education as well. In terms of exports from our side, aviation leasing is quite big at the moment. More than half of the aircraft leased in Indonesia are leased out of Ireland. It’s a niche business, but Ireland is actually the world centre for aviation leasing. The other exports tend to be around food and food ingredients. You don’t see too many consumer food products from Ireland here yet, as it mostly business-to-business. Beyond that, we have quite a trade at the moment in terms of medical devices, software and things like that.

What exactly are you doing in the field of tourism?
We are trying to make sure that Indonesians are aware of Ireland as a travel destination. Until recently, numbers were quite low but since the embassy opened, it has been much easier for Indonesians to go to Ireland - a visa is required but we don’t charge for it. The number has gone up around 60 percent, from around 1000 in 2015 to 1600 last year. Oddly enough, last year a huge number of people were going to Ireland on Harry Potter tours, but they also come for golf and of course the scenery. We want to introduce Ireland as a clean, green place with a nice scenery including mountains and seaside, an interesting cuisine, and a slow pace.

Could you also elaborate on your work in the field of education?
It is another start from a low base. Ireland at the moment has a very young population demographically which means we have a lot of young people going through school and college, so the university sector is quite vibrant and active but traditionally it did not have a lot of international students. At the moment, we are trying to reach 10 percent non-Irish students in colleges, partly because it helps to fund these colleges, partly because we feel that you get a better academic environment with a mix of people. We are trying to encourage Indonesian students to visit Ireland through scholarship and college fairs. Ireland is an English-speaking environment which makes it easier for foreigners, it tends to be less crowded and is a relatively safe environment, so I think parents would be happy sending their young students there. It is relatively low cost as well compared to other countries. We have been talking to the LPDP (Indonesia Endowment for Education) and they have approved a number of scholarships to Irish universities, which is a nice vote of confidence.

One of the most talked about topics these days is the Brexit and its repercussions. How will Ireland be affected by it?
Of course, we will be keenly affected by it. Ireland is not leaving the European Union. We are sorry that the UK is leaving and think that it is a mistake but it is obviously their decision. There are some positives too for us too. We will be the only English-speaking country in the European Union, and there are already a number of companies looking to relocate their operations from London to Dublin.

There are difficulties as well because we have a land border. As you know, there was violence in Northern Ireland for 30 years, and the peace process was greatly helped by Irish and British membership of the European Union. We have to find a way to make sure that the Brexit doesn’t withdraw some of that support. A lot of our exports to Europe go by land, so we are going to have find a way to deal with that from a customs point of view. But we will make it work.

What would you like to achieve in your remaining time in Indonesia?
I would like to get to a stage where the Indonesians we come across - from business, education and government - will say that they know three things about Ireland: it is located in Western Europe, it has a young, dynamic and very open economy, and it has a clean, green environment. If we get that message across, that will be enough for me.