The German Ambassador, H.E. Michael Freiherr von Ungern-Sternberg, arrived in Jakarta in September 2016 after a three-year tenure in Tehran, Iran. NOW! Jakarta recently met the Ambassador for an interview where he spoke at length about German-Indonesian relations. 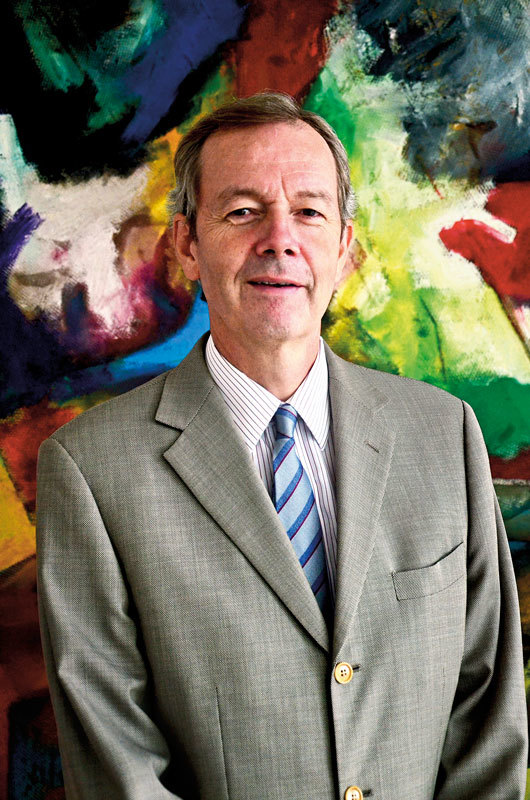 You have been in Jakarta for one year now. What were your expectations before you came to Indonesia, and have they been fulfilled?
I came here with an open mind. It is my first time in Southeast Asia and thus a whole new world for me. One of the advantages was that Germany has an uncomplicated and friendly relationship with Indonesia: there are no major political or economic conflicts. We view Indonesia as a modern democracy with an economy that is heading in the right direction.

There is potential to expand our cooperation in a variety of areas, on the political, economic as well as the cultural side. In many cases next to the government-to-government cooperation, contacts between civil societies have become very important. Therefore we are trying to promote these contacts and think that good progress is being made.

There are many “German traces” in Indonesia, from Walter Spies to Raden Saleh and Franz Wilhelm Junghuhn. Do you think that these early exchanges were the foundation for the fruitful relations between the two countries?
Yes, I think it is important to understand that our relationship goes back far - even further than Indonesia, or Germany have existed in their present form. There are many more names in addition to the ones you mentioned. Raden Saleh who lived in the 19th century is a great and inspiring example. He was a very modern and political artist who spent some years in Germany and even spoke the language. It is a very good basis to build on.

What would you say are the main pillars of the relationship between Indonesia and Germany today?
In the age of globalization, Indonesia plays an important role as the fourth most populous country in the world, the largest economy within ASEAN and a G20 member. In the UN context, Indonesia is very engaged in peacekeeping and is ready to show responsibility for global issues. It is seeking election for non-permanent membership of the United Nations Security Council for the period of 2019-2020. Germany, incidentally, is a candidate for the Security Council for the same term. Indonesia also plays a very important role when it comes to climate. Therefore, we look at Indonesia as a strategic partner. We have many values that we share, for example in the areas of human rights and democracy.

If you ask me to be more specific, I would like to start with culture, which I think deserves specific attention. Cultural exchange, learning the languages – these really give you a basis for a deep, long-lasting and sustainable relationship. We have a quite active cultural policy, and we can see that more and more Indonesians are learning German. The language courses at the Goethe-Institut are basically often over-booked. More and more students are coming to study in Germany – roughly 4,000 every year. We are among the leading destination countries for Indonesian students going abroad, which I think is an excellent development. Former President Habibie studied in Aachen. It is wonderful to have such a visible and good example for successful academic exchange.
President Jokowi is putting a big focus on vocational training. Germany has a long tradition in vocational training – a system where businesses and schools closely coordinate the practical and theoretical parts of training. That is one of the focal areas of our bilateral economic cooperation and we are giving a new push to this sector.

On the political side, we have developed an intense exchange on security policy, terrorism, extremism, interfaith dialogue and safeguarding global goods like climate and environment. Indonesia’s full involvement is needed! We all know how important this huge country is in terms of harnessing the challenge of climate change.

Germany is the largest economy in Europe, whereas Indonesia is the largest economy in ASEAN – how does this fact connect and mutually benefit the two countries?
These days, trade in Europe is not solely a matter of national sovereignty; it is very much covered by the European Union. The trading volume between the EU and ASEAN is an impressive EUR 208 billion. But there is clearly potential for much more. We would like to see trade liberalisation with ASEAN and at this stage are strongly focusing on agreeing with individual members of ASEAN, including Indonesia, on improving  the trade and investment environment through CEPA (Comprehensive Economic Partnership Agreement). We are in the midst of negotiations and are pursuing this with great energy.

On the economic exchange, it is worth noting that in today’s world, it is not just about selling goods. Nowadays, there is a strong focus on localising production, technology transfer, maintenance and servicing, as well as educating workforce — where both the two governments and the private sector are moving forward. We feel that Germany has great capabilities in these areas. Moving down that road will enrich our relationship for many years to come.

The ASEAN and EU-context of the Indonesian-German relationship is obviously important. The two dimensions, the bilateral and the multilateral, are mutually reinforcing.

Another area Germany is renowned for is science and technology. What are you doing here in Indonesia in this field?
We have had a long-standing cooperation in this area since 1997. One of our many projects was the tsunami early warning system, which took place between 2005 and 2011. There were periods during that time when 100 German scientists were working on this project. Overall, some USD 75 million was spent. We have a marine science cooperation that started in 2000. The programme was formerly called SPICE (Science for the Protection of Indonesian Coastal Ecosystems) and is now known as SCIMEF (Science for Indonesian Marine Ecosystems and Fisheries). We also have a geothermal power plant in North Sulawesi, while another example is our current collaborative research in Jambi on forests. We also have a research programme called Biodiversity and Health, which is about developing new substances for medical purposes, including vaccines and antibiotics. These examples are encouraging and we look forward to further develop science and technology cooperation.

During your time as Ambassador in Indonesia, what would you like to achieve?
It is important to understand that the relationship between two countries is no longer an issue just between governments, but also involves economic and cultural operators and the civil society at large. Therefore, we should open doors for these actors and help develop an environment conducive to constructive interaction.

We also have key governmental programmes and projects. One of the main goals is to promote the CEPA. The EU is the number one investor in the ASEAN region, yet in Indonesia it is not ranked on top. So the question is: why is that the case? I believe that we can facilitate investments coming to this country with CEPA. Obviously, the further improvement of the ease of doing business, of the regulatory regime and of the bureaucratic environment are also decisive factors. We are encouraged by the steps taken in the last years.

Vocational training is also very important to me. Everybody knows the big companies from Germany, but the backbone of German economy are the smaller- and medium-sized companies. Their names may not be that well known but very often they are extremely competitive and sometimes world market leaders in their segment. Their success relies on a highly qualified work force. If we have good vocational training, I am sure it would also help small- and medium-sized companies here and lay the foundation for sustainable growth for generations to come.