The Principles of Flight

For me, travelling is as much about the journey as the destination, and one of the things I enjoy most en route is observing other travellers. It amazes me how easily some people get confused. 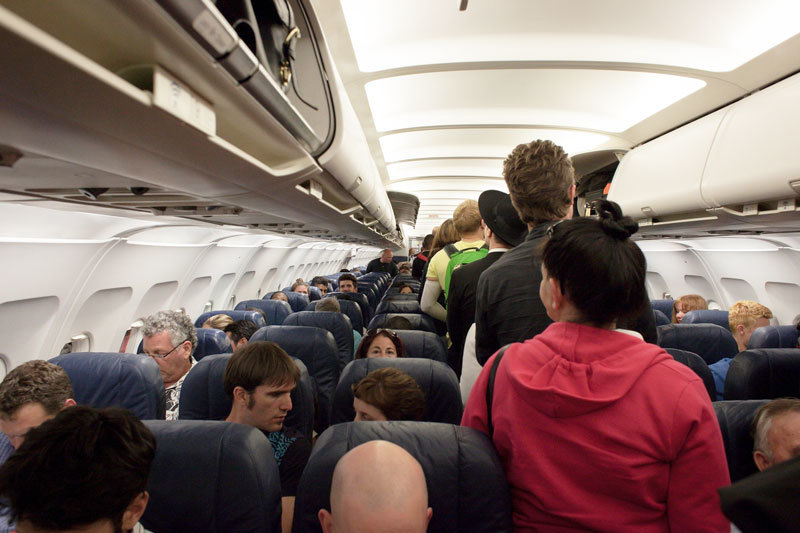 I can’t remember how many times I’ve seen people show their boarding passes to flight attendants in the aisle seeking guidance as to the whereabouts of their seats. “Excuse me... 34A please?” If I were the flight attendant I would be tempted to say “It’s in row 34, right behind row 33 and in front of row 35, and seat A is right next to seat B. If you get lost, look at the frickin’ pictures on the overhead lockers.” If the person doesn’t speak English or is blind I understand, but then I have to wonder how they got that far on their own – and if they are on the right flight.

Then there are the unfortunate inexperienced flyers who are completely bamboozled by the cunning and fiendishly clever design of the folding toilet door. They try to slide it, then they pull it, then they finally push it and fall into the toilet head first as the door folds. Hilarious, especially when they get bamboozled again trying to get out and need to be rescued by a flight attendant. And what could it possibly mean when that little rectangle on the door turns red and has the universally recognised “no entry” sign on it? Surprisingly, it does not mean “push harder”.

There is one thing that really annoys me about flying though. At check-in, we all sweat like drug smugglers when we put our bags on the scales, hoping we won’t incur exorbitant excess baggage charges. But what about heavy passengers? I was once in a check-in queue behind a huge Japanese sumo wrestler, who was easily two metres tall and 150kgs. After he waddled away with his boarding pass, I stepped up to the desk for my turn, hoping the girl had given him an aisle seat so we wouldn’t fly round in circles. I put my bag on the scale, waited anxiously, then groaned when the digits stopped at just over 25kgs.

After completing what seemed to be a very complicated calculation, the girl behind the desk told me I would have to pay USD100 for the five kilos over the economy class allowance. I looked at her in disbelief, then at the sumo wrestler (who was still visible nearby, apparently taking a rest on a step on the way to immigration and maintaining his physique with a few cheeseburgers). The girl knew what I was thinking. “You can take some stuff out of the bag if you like” she said, keen to avoid the argument she knew I was tempted to make. And it’s a reasonable argument.

People are free to make whatever life choices they wish, but to be fair there really should be a total weight allowance for passengers and bags combined, calculated according to a medically determined maximum weight for height such as the generally accepted Body Mass Index. This way, passengers like me with a combined body/baggage weight of 120kg would not be subsidising 170kg sumo wrestler/baggage combinations. Either that or everyone gets 50kgs regardless to even things up. In fact, there are some airlines already forcing large passengers to buy two seats, but I guess that’s more about space than weight.

Are the airlines counting on a contingent of stick-thin supermodels to drag down the average weight? Would an Airbus A380 with normal cargo and 500 sumo wrestlers plus baggage onboard actually fly or would the tires burst before the plane could move? Anyone?