A Weekend in the City of Heroes - Surabaya

NOW! Jakarta recently had a visit to the city called ‘The Light of Java’ and reviewed some interesting facts and tourist destinations around. Here’s an inside look at what you can expect to see the first time you travel around Surabaya, East Java.

The capital of East Java province, Surabaya is dubbed The City of Heroes in honour of its founders’ fighting spirit and sacrifices during the reign of kings and queens of Majapahit. The history of Surabaya derived from the word Sura (brave) and Baya (danger), which later represents the courage the natives of Surabaya showed against oppression (famously known as Arek-arek Suroboyo).

These people are taught to be brave and willing to fight and take risks against any danger. The value of heroism began in the battle against the Mongolian forces under the leadership of the legendary Kublai Khan in 1293. Over a span of centuries, the peak of the heroism occurred during the Battle of Surabaya, when young Indonesian nationalists and Arek-Arek Suroboyo fought against the British-Indian troops as part of the Indonesian National Revolution on 10 November 1945.

In the eyes of the colonists, Surabaya had become such a great attraction and investment, as the city was the centre of commerce and industry. Surabaya, which originally was just a village on the side of the River Brantas, turned out into an important melting pot of the Brantas river in ancient times, thus making it the roots of business activities in trade and commerce. Trade and commerce in Indonesia’s pre-colonial time was a fundamental aspect which developed to a significant extent through the Dutch and British colonisation especially in the eastern side of Java.

Today, Surabaya is one of the largest and most dynamic city in Indonesia where not only metropolitan and traditional life runs harmoniously, but where business, commerce, industry as well as education thrives. There is diversity among the people, cultures, habits and way of living, which has also affected the city’s development and the life of domestic immigrants. In this modern world, Surabaya has committed to promoting sustainability and environmental management and undertaking the development of city parks and reforestation.

Moreover, the local government of Surabaya sought a green growth approach, through which public transport issues can be tackled in combination with Surabaya’s broader urban development priorities. The main objective of the project was not meant to initiate an urban design vision; rather the concentration is to evolve a series of key development, public areas and environmental enhancement projects, including affordable housing and detailed riverfront and village revitalizations. It is no surprise that the United Nations commended Surabaya in early October 2018 for their efforts in promoting sustainable cities and human settlements. In addition, Surabaya is also an ideal base to explore urban and rural attractions. 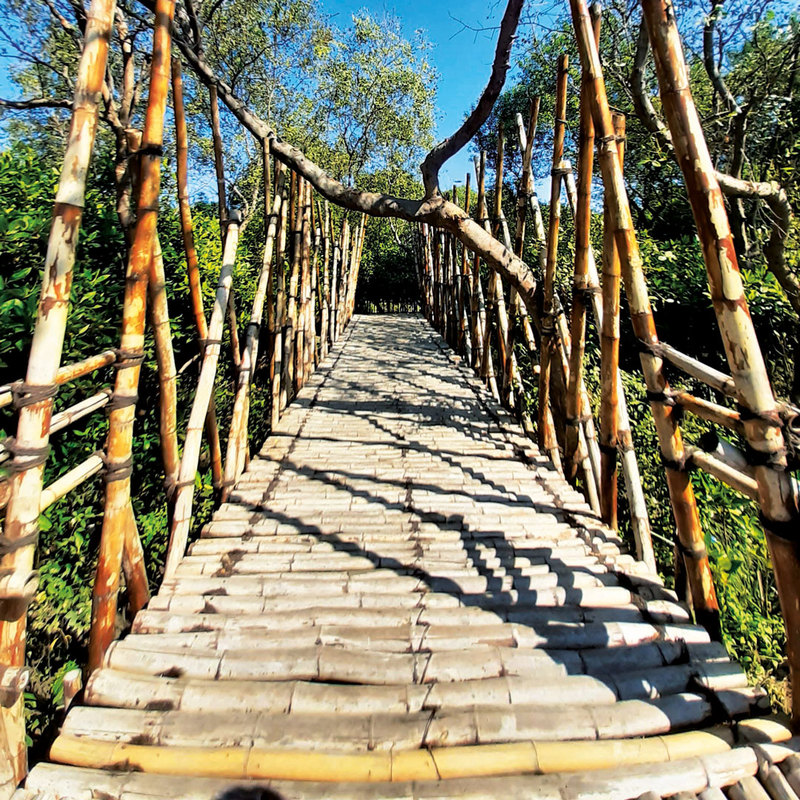 Eco-tourism enthusiasts can visit a Mangrove Forest in Wonorejo, southeast of Surabaya. In line with the implementation of key development on environmental enhancement projects managed by the City Government of Surabaya, Mangrove eco-tourism has become the focal point to sustainable ecological development. Mangrove itself has benefits to humans and ecosystems. Not only a home to an incredible array of species, mangrove forest is essential to maintaining water quality. With their dense network of roots and surrounding vegetation, they filter and trap sediments, heavy metals and other pollutants. This ability to retain sediments flowing from upstream prevents contamination of downstream waterways and protects sensitive habitat like coral reefs and sea-grass beds below.

Although mangrove ecosystem is nothing new, the mangrove forest in Wonorejo offers a new take on enjoying fresh air and greenery. The mangrove conservation forest is located on Jalan Raya Wonorejo No. 1, Wonorejo, Rungkut, Surabaya.

Situated in the beating heart of the city, the Monument of Heroes symbolises the heroic spirit of the natives of Surabaya. This 40-metre building was designed with Trisula engravings, Cakra, Stamba and Padma as the fire struggle symbol. Meanwhile, Sepuluh November Museum was established to provide information about the history of the Battle of Surabaya, which took place on 10 November 1945.

This warrior monument is located on Jalan Bubutan, Alun-alun Contong, opposite of the East Java Governor Office. Here’s what to expect when visiting this monument. There are a series of heroic statues designed to commemorate the struggle of the heroes in the battle of 10 November 1945 in Surabaya, such as Jayengrono Garden (Red Bridge), where the chaotic battle of Indonesian nationalists against the British and Japanese armed forces took place, the statue of Special Police (Polisi Istimewa), and information about National Force.

The tragedy of flag ripping in Yamato Hotel . People in Surabaya had just commemorated one-month Indonesian independence by organising an open-meeting in Lapangan Pasar Turi on 17 September 1945. On 19 September, a few members of the Mastiff Carbolic, who were also the part of the Social Contact Committee, hoisted the Dutch flag as a symbol of the revival of the Dutch colonisation in Surabaya. The natives of Surabaya were so angry when they saw the Dutch flag raised on the top of Yamato Hotel that they proceeded to rip the blue colour of the Dutch flag. 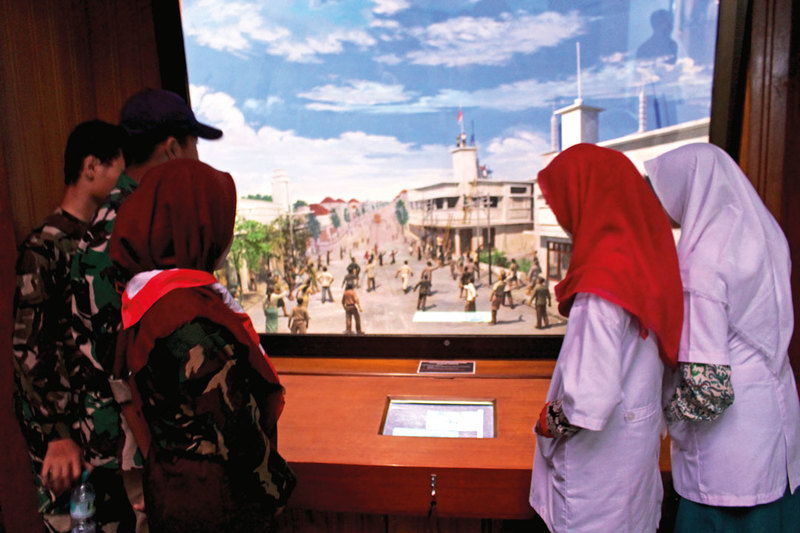 The attack on Kenpetai Building (now Monument of Heroes). This tragedy took place on 1 October 1946 when young Indonesian soldiers under the command of Abdul Wahab, Hasanudin Pasopati and Suharyo Kecik banded together with the Special Police under the command of Mohammad Yasin, PRI corps, Hizbullah, the Fire Fighter corps and other participants from the entire nation. The chief commander was Abdul Wahab, and the main objective was to seize the Kenpetai building and takeover the Japanese’s weapons, including crates of Mauser Parabellum, or Luger, that came from Germany. 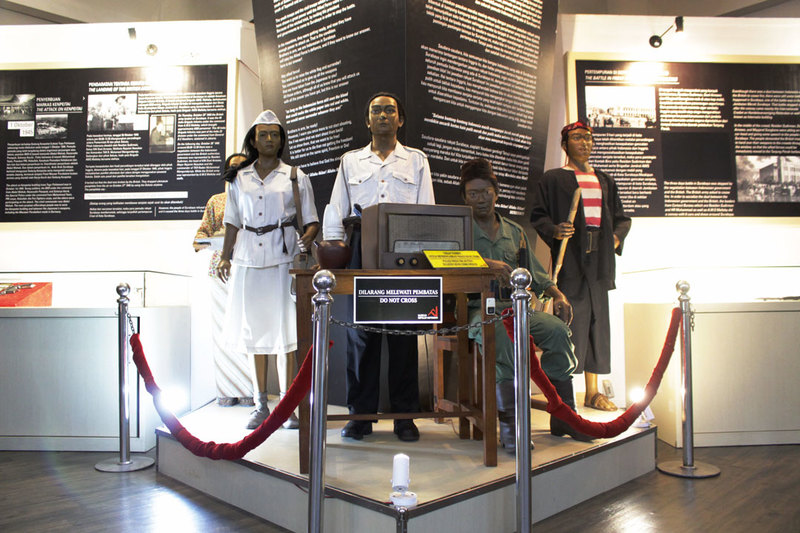 The British broke the agreement. They dropped ultimatum pamphlets from the air on 27 October 1945 by using the Dakota airplane, “Persons seen bearing arms henceforth are liable to be shot.” However, the people of Surabaya refused to yield, leading to the three days battle in Surabaya. 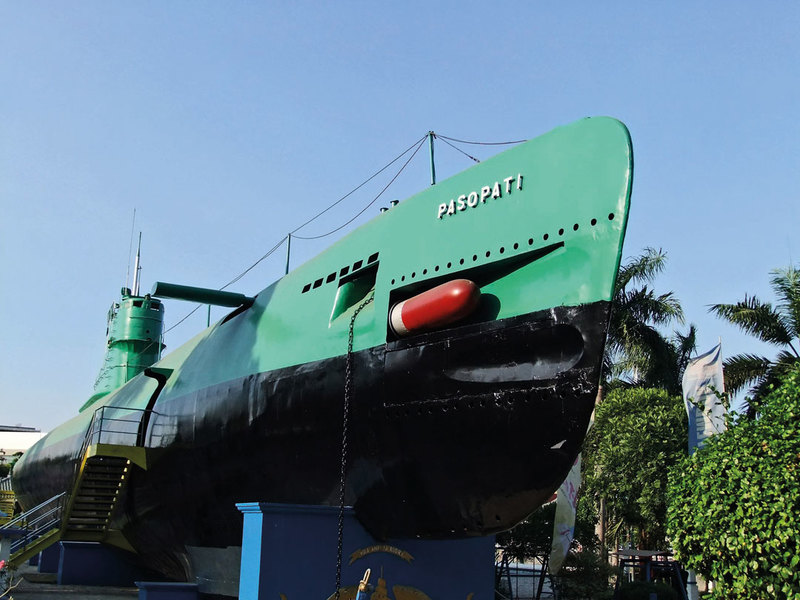 After learning history in the Monument of Heroes and Sepuluh November Museum, the Submarine Monument is next. It takes around 30 minutes on foot or 10 minutes via car. The Submarine monument is located next to Surabaya Plaza Shopping Center on Jalan Pemuda No. 39, Embong Kaliasin. This monument is renowned for its Asia’s largest submarine monument that draws visitors to the banks of the Kalimas River south of downtown Surabaya. Built in Vladivostok, Russia in 1952, the KRI (Kapal Perang Republik Indonesia) Pasopati 410 is a Whiskey-class sub that was used by the Indonesian navy from the early 1960s until it was decommissioned in 1990.

Officially inaugurated on 27 June 1998 by the Naval Commander of the Republic of Indonesia Arief Kushariadi, the monument has since become the most visited tourist destination in Surabaya, as it offers a complete history of Surabaya as the city of heroes and the Indonesian naval history during the colonial era. Grounded on land and accessed by stairs, the 76-meter-long (249-foot-long) sub has been modified very little since its service days and even still smells a little of engine oil.

Onboard, visitors can expect a series of attractions ranging from submarine’s crew quarters, officers’ lounge, control room and torpedo room. There are also boats and diorama in the monument, which can be used for sightseeing and traveling along the Kalimas River. 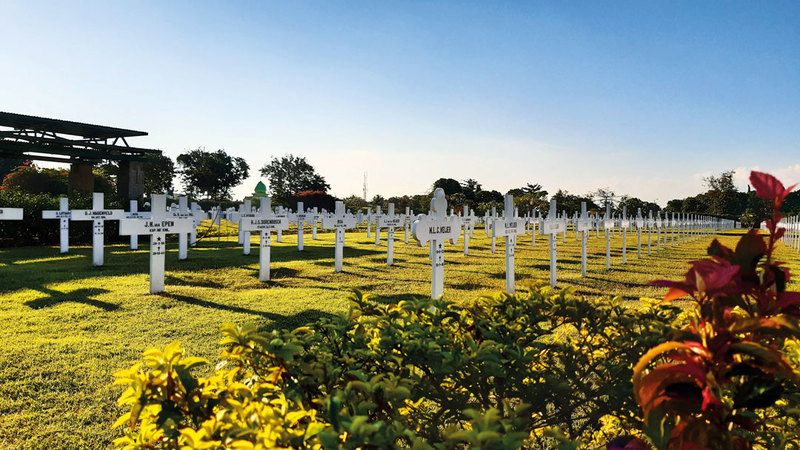 Kembang Kuning Cemetery is the final resting place of more than 5,000 Dutch War victims, most of whom were members of young Indonesian armed soldiers, foreign armed forces and civilians who perished during the Battle of Surabaya. In the cemetery, you’ll find a Karel Doorman Memorial that commemorates Java Sea Battle on 27 February 1942 with the names of 915 sailors who died in the battle carved on the memorial.

Organised by Oorlogsgravenstichting (OGS), or The Netherlands War Grave Foundation, the cemetery encourages the public to engage with stories of the war dead and honour those who have lost their lives during various struggles. The cemetery is located on Jalan Kembang Kuning, Pakis and is open to the public free of charge.

Surabaya has plenty of highly-recommended accommodations. One of these is the JW Marriott Hotel Surabaya, which offers luxury accommodation, superb dining, excellent service and elegant venue space for events of all sizes. This hotel is located at the shopping mall areas in the centre of the city on Jalan Embong Malang No. 85 – 89. Moreover, JW Marriott Hotel Surabaya is within easy access to many places of interest. For food enthusiasts, the hotel serves a wealth of restaurant options, fine wine and cocktails. Enjoy a wide range of sumptuous foods at Pavilion Restaurant, ranging from French cuisine, Chinese authentic dishes and various local delicious foods. For a steakhouse experience like none other, head to Uppercut Steakhouse Restaurant.

Another choice is Ciputra World Hotel Surabaya. Situated on Jalan Mayjen Sungkono No. 87 – 89 Gunung Sari, this hotel offers a world of sophisticated facilities and entertainment all at your doorstep.

If you want to explore more to the eastern part around Malang, The Shalimar Boutique Hotel is perfect for you. Not only is the hotel situated in a luxurious residential area in Malang, but it also offers easy access to many preserved colonial sites of the 1930s.