The city that’s always passionate about presenting its creativity in every corner leaves such a good impression on travellers.

Bandung’s image as a creative city has been embedded in the memory of Indonesian people. Like Jakarta and Surabaya, the city is also a centre of fashion and lifestyle trend. Being a developing country, Indonesia has only few cities applying the creative city strategy, and Bandung is a pioneer of the application of creative city in the country, making it a pilot city to encourage creative economic actors because it has great potential related with creative industry, such as designs, culinary, arts, crafts and many more.

After it was named as a pilot project of creative cities throughout East Asia in 2007, on 11 December 2015, UNESCO officially included Bandung as one of UNESCO Creative Cities Network as a Creative City of Design.

We can learn the process how the city becomes a creative city from the international acknowledgments, from developing its creative economy, the process of network formation, strengthening the potential of networking to the improvement of public spaces. The city is capable of running these development stages, starting from its economic dimension, social dimension, cultural dimension and environmental dimensions. The actors that play a role in the development are community, government, universities, private sector and media, as well as a number of other factors, such as leadership, communication, external inspiration, bureaucratic structures and community participation. 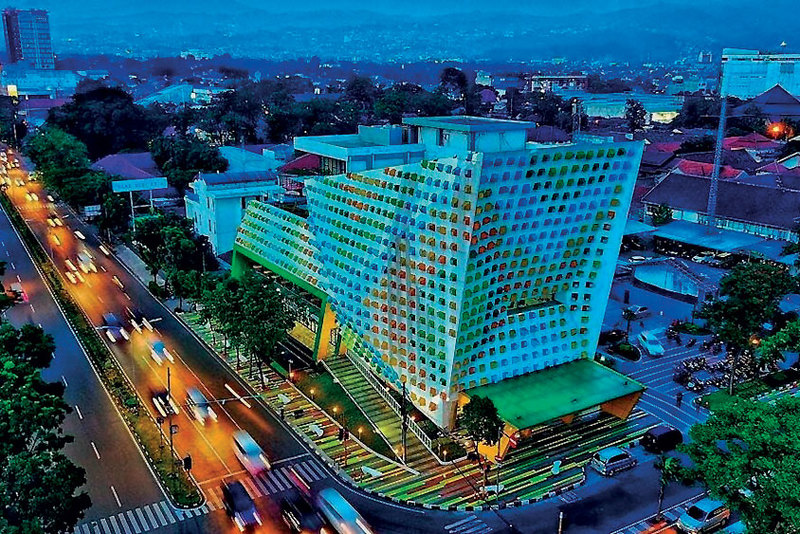 As the capital city of West Java and home to 2.5 million inhabitants, Bandung has many initiatives driven by the city’s young demographic. Bandung hosts a variety of workshops, conferences and festivals, all encouraging the development of creativity, prototypes and product design in particular. In fact, 56% of Bandung’s economic activities are design-related, with fashion, graphic design and digital media being the top three subsectors in the local creative economy.

Fondly known as Paris van Java, Bandung is establishing around 30 creative hubs. And with eight urban villages now established as creative villages, Bandung has secured a deep understanding and established expertise in the development of creative cities. This knowledge is demonstrated by the variety of programmes and events organized by the city, such as Helarfest–one of the Bandung Creative City Forum’s (BCCF) signature programmes aimed at fostering networks among creative cities. The Bandung Municipal Government has made a strong commitment to stimulating the creative economy through the implementation of new centres, industry areas, R&D support and events.

Portraits of the creative life of Bandung people can be found in every single side of the city. One of the most vibrant sites is Bandung Creative Hub (Jalan Laswi No. 7, Kacapiring) which functions as a centre for fostering the exchange of creative experiences and ideas both national and international level. Launched on 28 December 2017, the six-storey BCH was built as a shared place to develop creativity and education as well as to become a laboratory of creative ecosystem in producing creative products in order to encourage the wider economic development of the city.

Bandung has also transformed its villages into creative sites. Dago Pojok Creative Village (Jalan Dago Pojok No. 95, Dago, Coblong), for example, is just a modest city village with limited facilities especially wide road access. In the hand of artist and humanist Rahmat Jabaril, locals are encouraged to transform the slum into a creative village through cultural movement. Rahmat believes that every human being has an artistic soul, and any village has potential to be a village of more value.

At this village, tourists can discover arts workshops by tracing steep downhill alleys as they look upon beautiful murals and paintings on the alley’s walls. The village provides various packages for tourists who want to take course of paintings, traditional dance jaipong, traditional martial arts pencak silat and puppet-making. 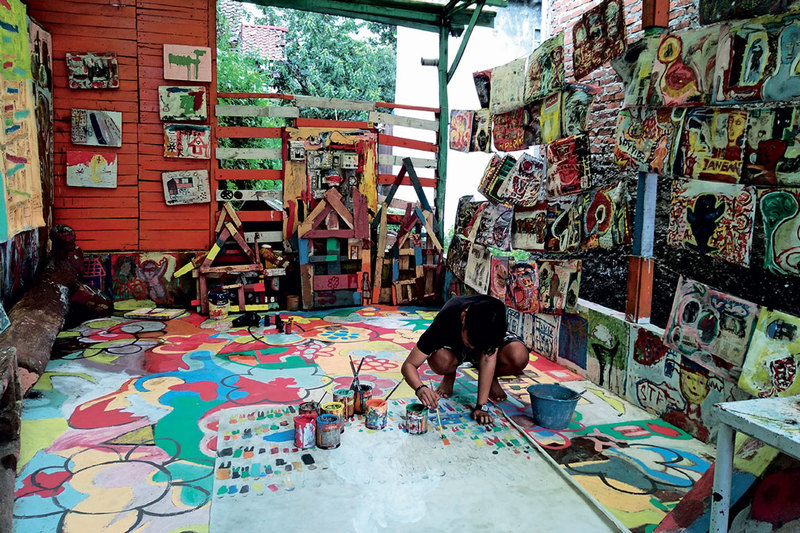 According to Rahmat, Dago Pojok Creative Village is about how the local people manage self-awareness and digest the potential of their own village as a cultural base, in addition to save the local people around village which are situated in the city’s basin which is a rainwater catchment area with restrictions of build any structures more than three stories high. Mostly comprised of budding artists, the village shows responsibility to save the environment. Dago Pojok Creative Village is the forerunner to the growth of creative villages in Bandung, after the West Java government applied the concept to the 30 sub-districts in the city.

Filled with villages with spatial planning that have not been managed properly, Bandung is known to have thousands of alleys. These alleys are in fact borders between the settlements and housing complexes. Too small to fit a car, only motorcycles and bicycles are free to traverse the alleys. Down the aisles in the city can also be likened to entering the labyrinth. People not from the area often get lost in the alleys. But, Bandung has succeeded in managing the community to continue to be creative in their respective surroundings. 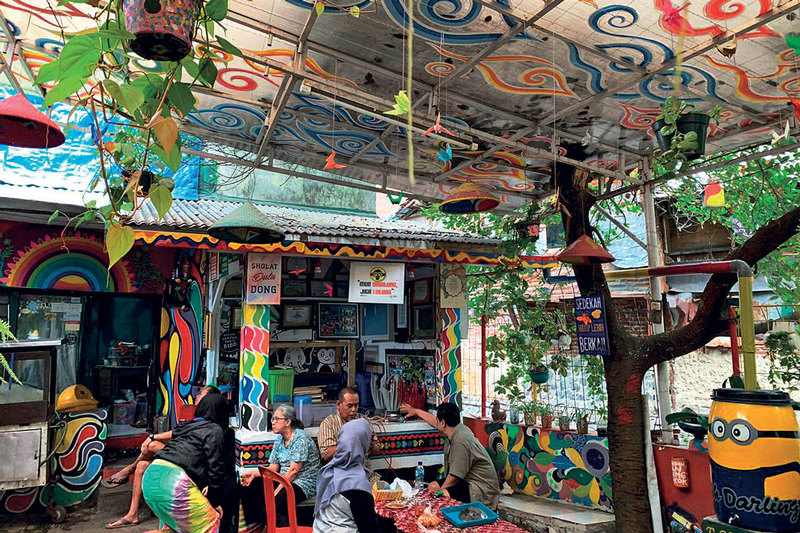 Cibunut village (RW 7, Kebon Pisang village, Sumur district), for example, has turned its untidiness into a colourful form. This village is a community base of mural artists that thanks to its program Cibunut Berwarna (Coloured Cibunut), this village officially become a creative village in 2017. ‘The Power of Collaboration’ was printed on the side of one wall of the house residents in the form of a mural showing the villagers collaboration on decorating the walls of their homes. This is one thing that distinguishes the village from similar villages in other regions. There are nine colours used to mark people’s homes, and this has become the characteristics for nine RT or village divisions. Through colour, the village helps visitors find addresses to prevent confusion or losing their way.

This village is inhabited by 2,000 people who are also creative in managing their households waste. It is a waste-free area and a pilot area for innovative waste management. The citizens have been educated to sort waste at home and create a separate waste collection system. Every Monday, Wednesday and Saturday the residents collect organic waste and food scraps to be made compost with various methods, namely biopore, composing brickwork, digester and composter. What they do is to reduce organic waste that is thrown into landfills. And they have built the Oh Darling or orang hebat sadar lingkungan (great people who are environmentally conscious) waste bank, in addition to working with the Bandung city main waste banks. Earnings from collected garbage will go to the village savings, which will be released once a year, a week before the Eid Al-Fitr holiday arrives.

But, if tourists want to see creative works of a great artist, they can head to NuArt Sculpture Park (Jalan Sutra Duta Kencana II/11) owned by maestro Nyoman Nuarta, designer of Garuda Wisnu Kencana Cultural Park in Bali. NuArt Sculpture Park is his workshop in creating great sculpture works, which are exhibited in its gallery that spans from the beginning of his career to the latest masterpieces. The gallery is also open for other artists to showcase their works. 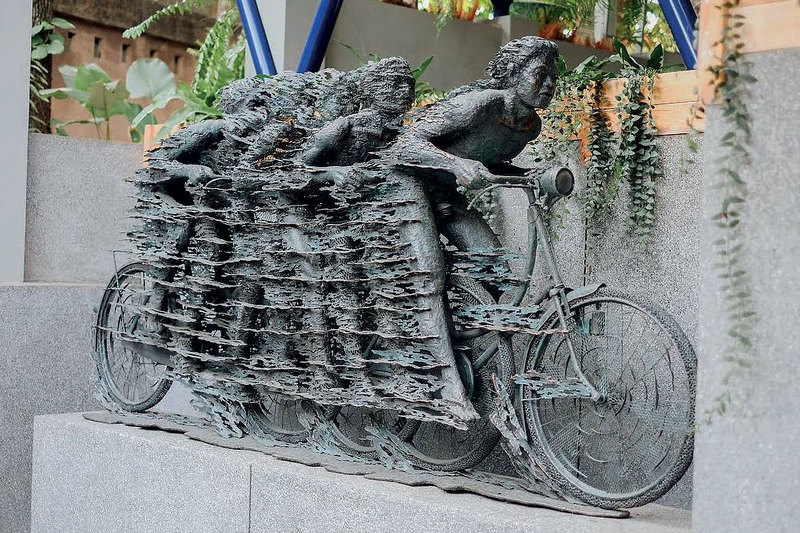 NuArt Sculpture Park spans three hectares, and the area is also a park landmark. Visitors are not only presented with statues indoors but also outdoors which are scattered under the shade of trees. There are lots of exciting and educational activities in this place. In its gallery, we can enjoy artwork from a short distance in the form of sculptures and paintings that emphasize the details of a strong philosophy, beauty of shape, aesthetics, size and other things. 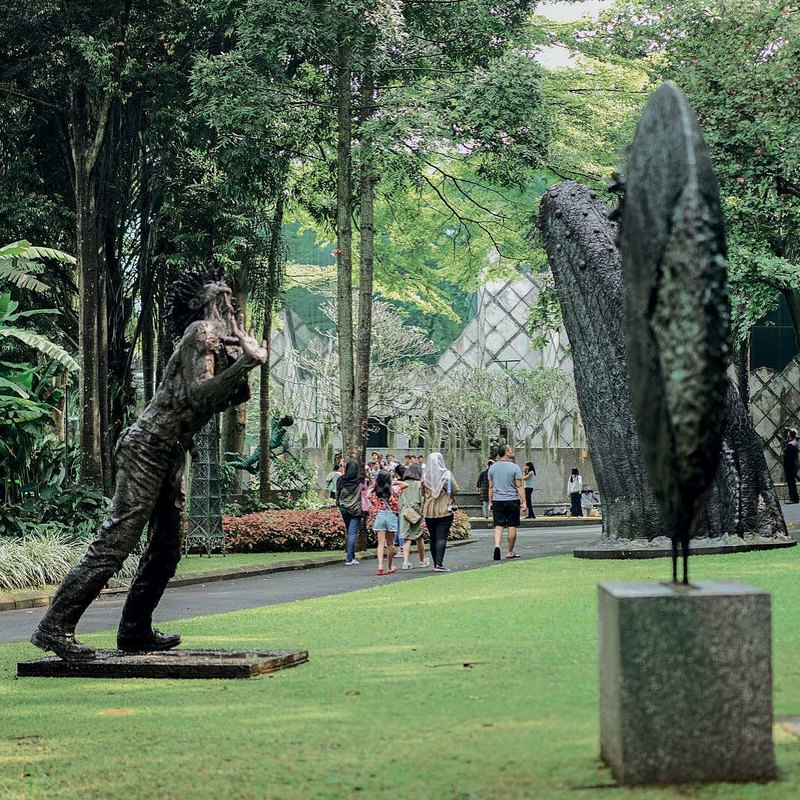 There are many animal and human-themed sculptures to enjoy. One example is Waiting that tells about passengers waiting for the arrival of aircraft that is being delayed at the airport. This statue depicts the activities of the passengers who are busy with their respective activities in their own anxiety. While Man and Cosmos is a circular sculpture with a central vortex. At the top there is a hand complete with a watch, and on the left there is a group of people with various forms, which overlap. This sculpture tells about a circle of life, meaning what humans do in the world, will surely have an impact and also happen to human beings themselves. The existence of a watch on the statue indicates time.

The hotel is connected to the famous Cihampelas Walk, a unique boulevard style shopping mall. With modern minimalist with white colour dominant, the hotel offers 128 beautiful guest rooms and variety of modern amenities.

An upscale version of Artotel, located on one of the most historical areas, this an eclectic destination combines historical values, architectural flares of Art Deco and Tea Walking experience concept. It’s a perfect melting pot to explore local delicacies.

Strategically located in the vicinity of Husein Sastranegara airport, this modern hotel lies 1,100 metres away from Bank Indonesia building featuring 176 guest rooms which some of rooms have a view over the park and a golf course.

A five-star hotel nestled perfectly in the city centre that provides a seamless meeting and leisure experience for modern travelers. The location will certainly spoil every patron to take a break from the routine and enjoy a short walk to explore the city.