Blitar is a quiet, friendly town in East Java. From mystical lakes with god-fish legends to the stunning Bung Karno Museum honouring the founder of Indonesia, it is full of history and intrigue, as well as colourful characters.

At the entrance to the Bung Karno Museum and Library, a beautifully framed large portrait of President Soekarno (1901 – 1970) is displayed, protected by a rope and a guard. I was invited to stand at the side of the painting and watch a strange phenomenon. The canvas continuously pulsated at the level of the president’s heart. “No one can explain this mystical movement”, the museum attendant told me. “Please look for yourself and spend as much time as you like here. You will find there are no air vents blowing on the painting.” And, indeed, this was true. “We love and adore our first Indonesian president and here his heart continues to beat on,” he said with a beautiful warm smile. 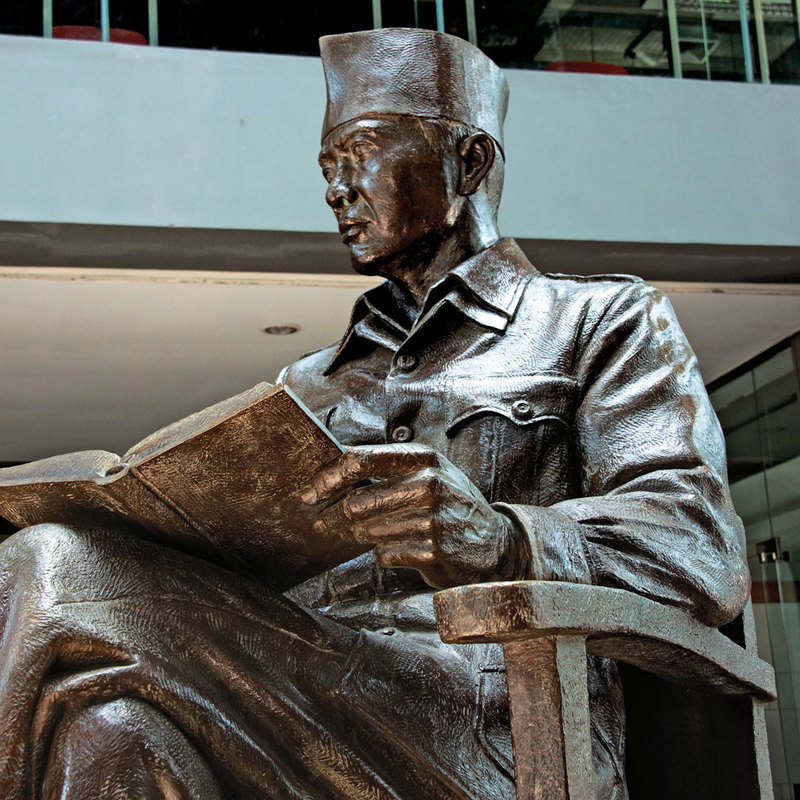 The Living Legend of Soekarno

It is worth spending a good 2 - 3 hours at the museum, which features an extensive collection of photographs and books about Soekarno’s rule. However, the unusual and patriotic behaviour of some of the locals adds another dimension entirely to commemorating their president’s reign. It seems a few eccentric characters yearn to bring back the heady years of the Soekarno era, and so they dress up in the fashion of the time. Some hand out political flyers supporting Soekarno and some actually imitate him, putting on stately airs and graces.

I encountered one enthusiast just outside Soekarno’s childhood home. As he casually pedalled past me, he called out, “Bring back the Soekarno days”. His bicycle was adorned with old photos, as well as political slogans written on bits of cardboard, and a collection of memorabilia from the period.

Impersonating the former president is a pretty serious business for some folk. I was talking with a local who told me, “These characters are really convinced that they are Soekarno himself”. He continued, “It is an actual deranged condition, a type of delusional disorder that exists around these parts of East Java. Don’t worry, though, most of them are medicated, and they are harmless. You see a lot of them around Blitar especially, and somehow, they seem to blend in very much to everyday life.” 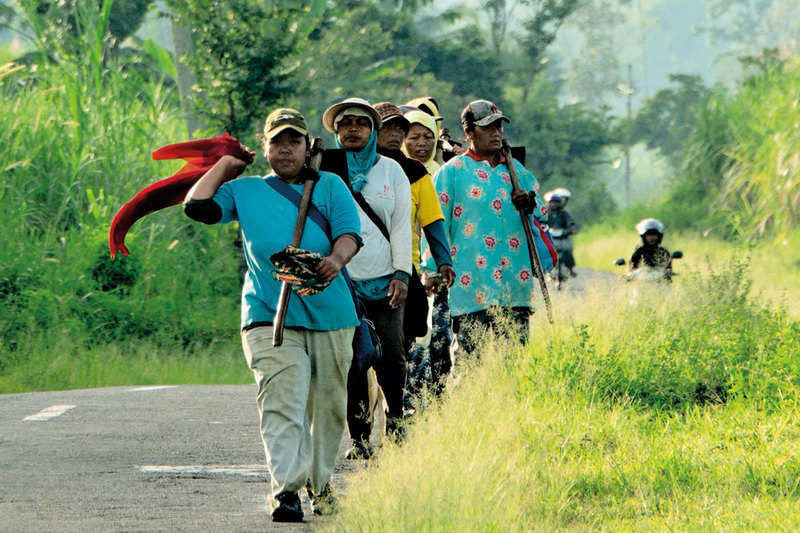 A visit to Soekarno’s charming Javanese childhood home will also take you back in time. You can stroll through, room by room, looking at the original furniture from the early 1900s and browsing all the original old photos and paintings. You can even check out Soekarno’s car in the garage. Every June, Blitar commemorates The Proclamator’s birthday and many events and activities are held in the town.

A little bit of magic can be found around the town too, as Blitar is said to be home of ketok mejik, or panel beating by magic. This describes the unseen spiritual forces which are said to sometimes work on your car, magically performing panel-beating feats and mechanical repairs with invisible workers and other miracles. It is common to see ketok mejik workshops, not only in Blitar but all over the island of Java, including Jakarta.

Mystical powers are also at play at a hidden moss-clad temple in a dark forest, which sits close to a blue-green lake about 30 kilometres from the township of Blitar. As I stood on the shore of the lake, I saw strange swirling in the lake. Seeing me staring at the water, a polite young Indonesian local approached and explained, “This is home to the god fish. Because of this, it is forbidden to swim here. I have seen its translucent body swimming here. I only saw it two times, but did I see a skeleton outline of the god fish’s body for myself,” he said earnestly.

The place is called Rambut Monte and my new-found friend was keen to expound on how mystical this beautiful place was. “The lake and its surrounds resemble hair. See the vivid colours reflected in the crystal-clear waters of the lake?” he said pointing, “On occasion, these reflections fan out like flowing hair.”

I must admit, it was hard to drag myself away from Rambut Monte, which did have a special aura. “Come back for some of our ceremonies at the temple here”, my friend said as he warmly bid me farewell. Maybe, next time I will check out the Hindu calendar in advance and do just that. Great idea! 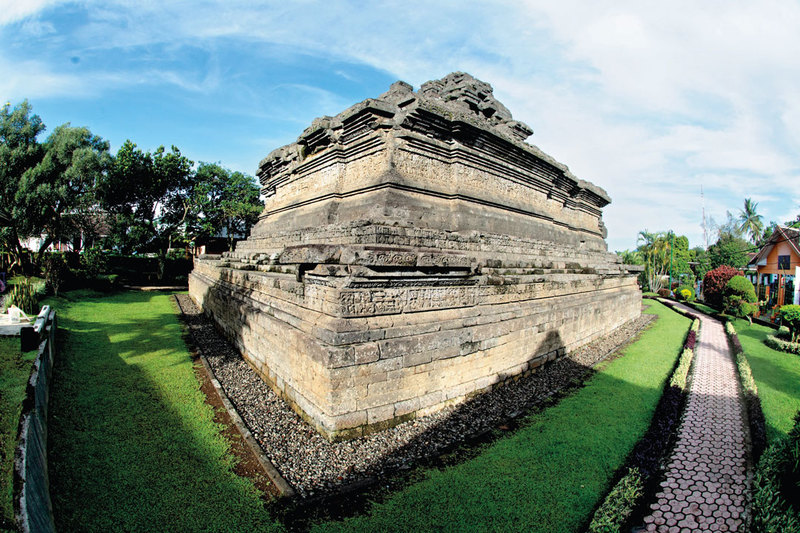 Next, it was time to move on to the beautifully preserved Candi Panataran, which is the largest Hindu temple in East Java and can be found just 12 kilometres from Blitar.

Located in the stunning foothills of Mount Kelud, this temple dates back to around 1200 CE, the time of the Singosari dynasty. The temple has some similarities to the Hindu temples in Bali. Its intact wall reliefs depict the Ramayana and can be followed in etched stone as you circumnavigate the different levels of the temple.

The magnificent temple complex took 250 years to complete. It stands as one of the largest remaining Majapahit sanctuaries in Java, with some exceptional examples of architecture and stonework from this 13th to 16th century Hindu-Buddhist empire. 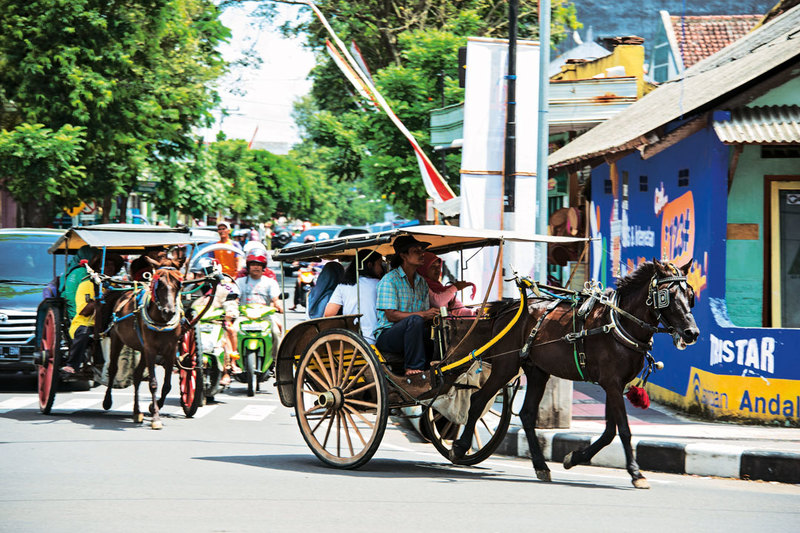 Amazingly, you can also dine here by special arrangement. The Tugu Hotel in Blitar needs only 2 - 3 days’ notice to provide an exquisite 5-star dinner and also arrange for a Javanese classical dance troupe to perform. The dance tells a very special story, combining the rule of the Majapahit Kingdom and the epic Ramayana tale. It is called the “Lost Temple Dinner” and it’s worth going to Blitar just for this experience alone. The hotel sets up a trail of bamboo torches at night along a winding pathway and places candles throughout the grounds of the temple. Under a full moon, this may well be one of the most romantic dining experiences in Java.

Unassuming Blitar is a town where surprises are not too far below the surface, with dramatic surroundings and some interesting characters. This spot in East Java, offers an array of unique experiences and encounters.