Steeped in history, dominated by towering volcanoes and dotted with national parks, coffee and tea plantations, East Java has a lot to offer in a small area. 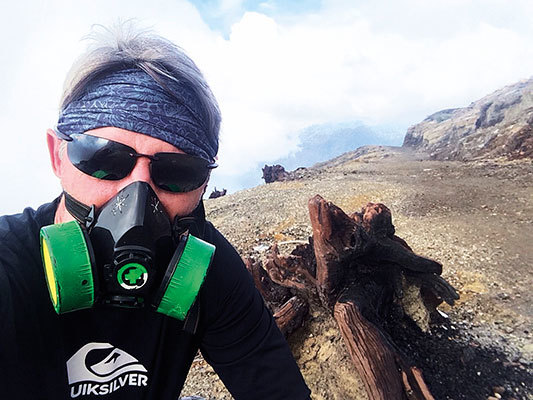 My first stop was Surabaya and the sprawling harbor of Tanjung Perak, lined with warehouses and crowded with trucks, it is a port for both Bugi schooners and modern steel freighters. Pallets of Bintang beer swing from cranes, huge coils of pipe are hauled up narrow wooden planks, and heavy bags of cement are lugged by men ghosted in dust. As Indonesia’s second busiest port, it is the entry and exit point for the myriad of items that have fueled Surabaya’s economy for over one hundred years.

From Tanjung Perak I took a motorized becak to the famous House of Sampoerna, a beautiful colonial compound built in 1862 and home to Dji Sam Soe, Indonesia’s famous clove cigarettes. The facility consists of a small museum, the production plant and an excellent restaurant. I savored an espresso before going inside the factory to witness hundreds of workers, all wearing white shirts and red caps, rolling, cutting and hand-packing cigarettes with such speed and efficiency that they rivaled mechanical robots. Even with weeks of practice and in my caffeine-induced state, I doubted whether I could ever match their output.

A native dish to Surabaya is Lontong Balap (Lontong Race), a savory concoction of lontong, bean sprouts, fried tofu, and lentho. It got its name years ago as vendors would literally race each other vying for customers. I stopped in a tiny warung (restaurant), pulled up a plastic chair at the bar, and enjoyed a bowl with some street laborers on a lunch break. They asked me if I knew their relatives in Miami, and I asked them directions to the fish market across the river. Their directions proved invaluable and before long I was boarding a quaint hand-operated cable ferry and crossing the muddy Kali Mas river.

Here at the edge of the Arab and Chinese Quarters of Surabaya, there are many crumbling Dutch buildings in bad need of renovation. They are covered in moss and ferns, and some even have trees growing from their walls. As everywhere in Surabaya, the people here are extremely friendly and surprisingly eager to have their pictures taken. At the fish market, a cacophony of sights, smells and sounds, it got so crowded that I found myself boxed in by a stream of overloaded motorcycles, a lamp post and a pile of fresh tuna being stalked by cats.

I entered the flow and found another becak, this time it was human-powered. My driver, a coolie-hatted middle aged man with a huge smile, was able to take me directly to the market street that leads up to the Ampel Mosque, the oldest mosque in East Java. Built in 1421, it is a forest of wooden columns supporting a cavernous interior. Within the temple compound is the tomb of Sunan Ampel, a wali songo (revered saint) who helped to spread Islam throughout Indonesia. In the surrounding market you can find everything from prayer beads and head scarves to Arabian dates and scented oils. It’s a great place to shop, people-watch and contemplate history.

That evening I caught an overnight train to the terrifically-named town of Banyuwangi (meaning “fragrant water”) on the Bali Strait. There I rented a motorcycle and headed west through the rice terraces, up mountainsides lined with giant fern trees, and into the otherworldly land of the Ijen Platau, the largest caldera in Java. Ijen Plateau was created by a massive eruption during the Pleistocene geological period. Today it is a magical land of rivers, waterfalls, hot springs and plantations where you will see a thousand shades of green. The interior of the caldera is dominated by three towering volcanos: Merapi, Raung the quixotic Gunung Ijen.

I headed to the old Catimor Homestay, in the village of Blawan, the headquarters of the Catimor Coffee Estate and producer some of Indonesia’s finest Arabica beans. I immediately settled down to a cup of their best brew topped with a beautiful crema - a perfect welcome. When making coffee, Indonesians typically put the ground coffee directly into the water. When the grounds settle, it is ready to drink. This is generally referred to as a “kopi tabrak” or literally  “coffee crash” for the way the grounds crash against your teeth.

The Catimor Homestay is both historic and charmingly kitsch, decorated with venerable black and white photos juxtaposed with modern airbrushed bas relief caricatures- both depicting plantation life. Because of the elevation it can get cold, so bring clothing that you can layer. A highlight for me was to enjoy the evening air in the hot spring next to the pool with a cold beer.

Blawan is a plantation village housing hundreds of workers. The streets are straight and all the houses are identical and very tidy. I had a few meals at the “Best Selling Sweet Resto”, run by a chatty gentleman who also works for the coffee estate. He told me all about plantation life as I ate his wife’s homemade Soto Ayam. I learned that the plantation workers make IDR 37,000 ($2.75) a day, but housing, electricity and water are provided by the company. Not enough money to ever leave the plantation, but a respectable suburban life style far from the congestion and complications of the big city.  He also directed me to the jungle trail that led out of the village to a hot spring, a deep overhanging canyon, and a 10 meter waterfall - a virtual Garden of Eden.

After breakfast one morning I rode to the Pos Paltuding ranger station. By 8:30 AM I had rented a gas mask and started up the steep path to Gunung Ijen. The trail is surprisingly wide and smooth, as it was built to accommodate the carts used to haul sulphur down from the mountain. That morning I didn’t see much sulphur being hauled, but I did see carts full of worn out tourists. You see, most people climb Gunung Ijen at 3:00 AM with hopes of seeing the famous “blue flame”. Instead, I woke up as usual, had a leisurely breakfast and avoided the crowds. That worked out very well because a couple hours later when I reached the top, I was the only tourist in sight.

Kawan Ijen (Ijen Crater) is a geological wonder. Inside the crater is a turquoise blue lake 200 meters deep and almost a kilometer across. Some call the lake the largest bowl of acid soup on the planet as it contains extremely high levels of hydrochloric acid with an average PH of 0.4. On its shore, sulphuric fumes billow out from the bowels of the earth along with a stream of bright yellow liquid sulphur that hardens within minutes of reaching the surface. The hardened sulphur is then hammered into manageable chunks and loaded into baskets where scores of men, who look like ants from the crater rim 200 meters above, trudge up the the vertical incline, step by step, to deliver their payload to carts waiting at the top. These men, hard as nails, can make the trip in and out of the crater three times a day carrying 60-100 kilos at a time. The average worker makes about IDR 190,000 ($14.00) a day.

It was a fascinating scene, like something out of ancient Greece. So when when the wind blew the toxic fumes in a different direction, I took off my mask and talked to the exhausted but smiling men. I found that most did this job because it paid a lot more than other options in the area. One young father of two told me that he was saving money with the intention of opening a guest house in Banyuwangi, his home town, where both he and his wife could work. I bought a couple chunks of sulphur from him, but they were later confiscated by security officials at the Surabaya airport as sulphur is one of the main ingredients for making dynamite!

Early the next morning I toured a coffee plantation, walking amongst the diminutive trees laden with beans, shaded by both native trees and those specifically planted for that purpose. Once older coffee trees drop in production they are cut at 50 cm above the ground. As the root system remains alive, a new tree will sprout. It typically takes five years for a tree to become productive. After the tour it was time to sample the wares, so I settled into a lovely open-air warung overlooking the plantation and was served three samples of coffee made from different beans - a coffee lover’s paradise! 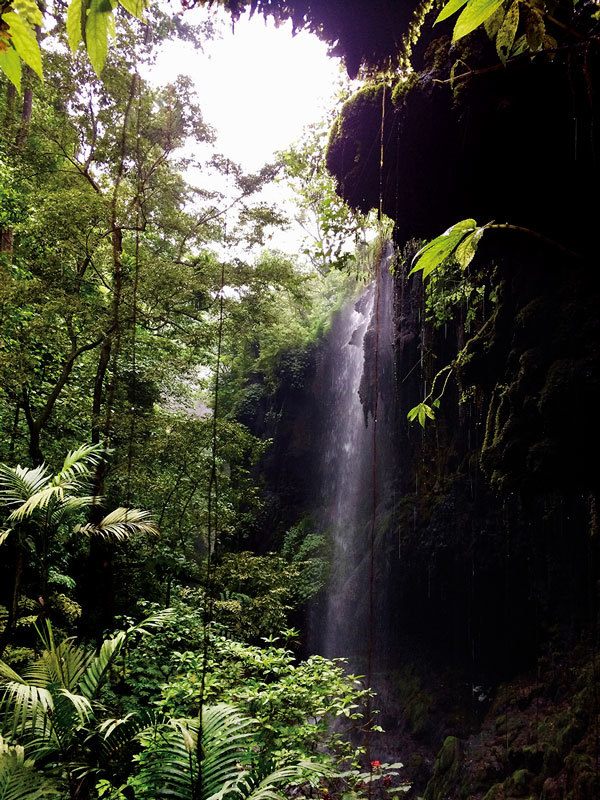 Eventually, I left the cool air of the Ijen plateau and threaded my way down the mountainside to Baluran National Park, Java’s African savannah. The fabulously-potholed road inside the park first led  through a lowland forest where I spotted long tailed macaques (monkeys) and wild boar. An hour later, the landscape abruptly changed and I was staring out over the vast Bekol savannah. There was an observation tower nearby, so I climbed it for a spectacular view of hundreds of deer and Javan buffalo peacefully grazing in the shadow of Gunung Baluran, an extinct volcano. Nowhere else in Indonesia can you find a vista quite like this.

From there I rode deeper into the park to Bama beach, a pleasant stretch of white sand sandwiched between forests of mangroves. I washed off the day’s ride with a refreshing swim in the clear blue ocean, when I spotted one macaque trying on my sunglasses and another drinking out of my water bottle. I shooed them away but those bold, little creatures came back, unzipped my backpack, and tried to steal my map. Looking up towards the parking lot, I watched another pair of macaques swing in and out of a car window. Who knows? Maybe they needed the map for a road trip?

Once back on the main road, it is only 30 minutes from the park entrance to Banyuwangi. From there you can take the train back to Surabaya or a ferry to Bali. It is also easy to go surfing in nearby Alas Puwo National Park or conquer more volcanoes like Mt. Bromo or Semeru. East Java is a treasure trove of history, natural beauty and wildlife so there is a lot to see in this in this little corner of Indonesia.

Tour and Travel Facts in a Nutshell 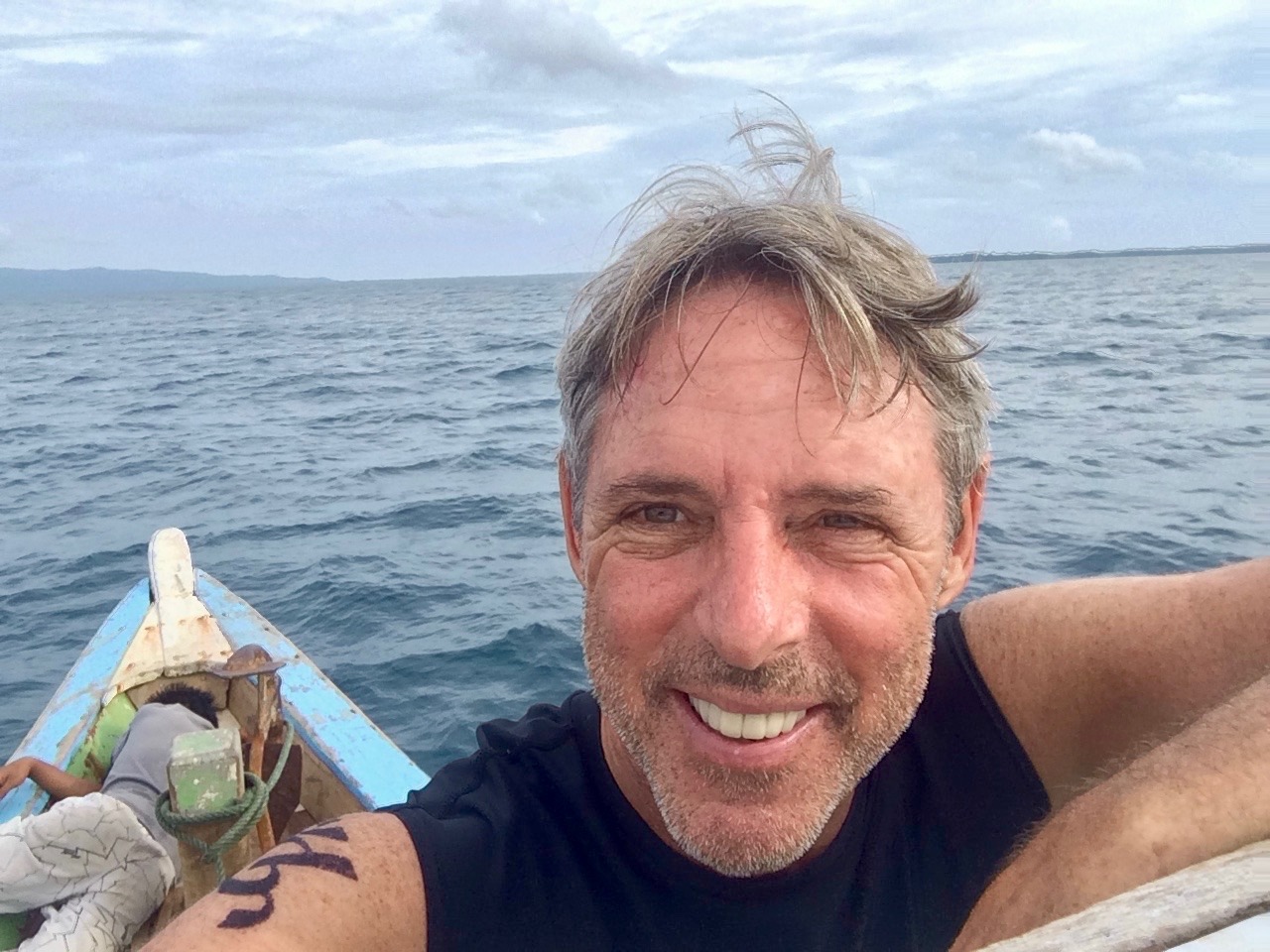