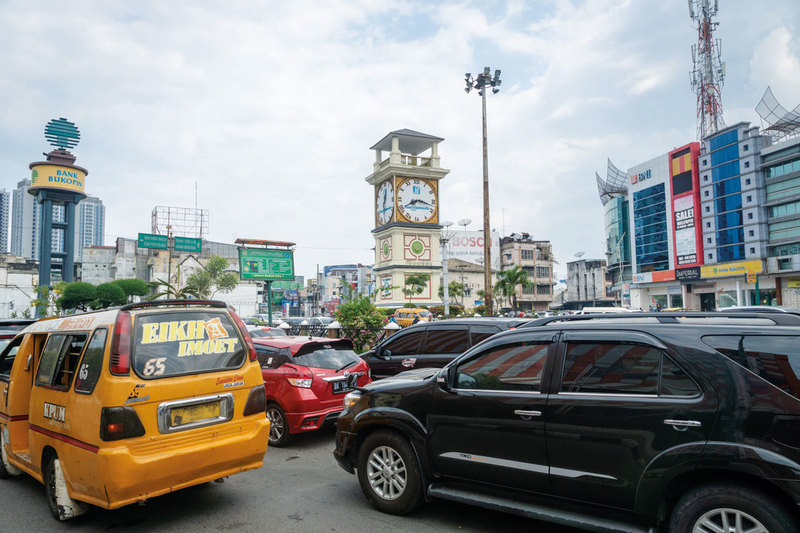 Anyone who has adventured to Medan won’t be able to deny the fact that they can be crazy about this city’s appetizing food options. The city also still keeps its old-world charm as it offers a portrait of real urban Indonesian facade. Medan’s distinctive character is shaped by the region’s ethnic diversity and rich historical values. A unique blend of cultures, with strong Malay, Indian, Batak, Chinese and Javanese communities, and a myriad of religious, ethnic and culinary traditions combine to create a city well-known for its rich arts and customs.

The first thing that usually capture tourists’ attention while on a city tour throughout Medan is the many unique Dutch-colonial buildings with strong European characteristics. Although many of them are gloomy and crumbling, they still speak of the history of Dutch colonialism in Indonesia.

The major landmark is The Great Mosque of Medan or Mesjid Raya Al Mashun, designed by a Dutch architect, Theodoor van Erp in 1906 and completed in 1909 in the era of Sultan Ma’mun Al Rashid Perkasa Ala, a leader of Sultanate of Deli. This building features an octagonal shape and materials including marble from Italy and Germany, the stained glass from China and the chandelier from France. The uniqueness of this mosque lies in the combination of Mughal (Indian), Europe, Turkey and Middle East. The minarets reflect a blend of Egypt, Iran and Arabic styles, while the arched windows resembled the designs of Islamic royal buildings in Spain in the Middle Ages and the dome applies Turkish model. 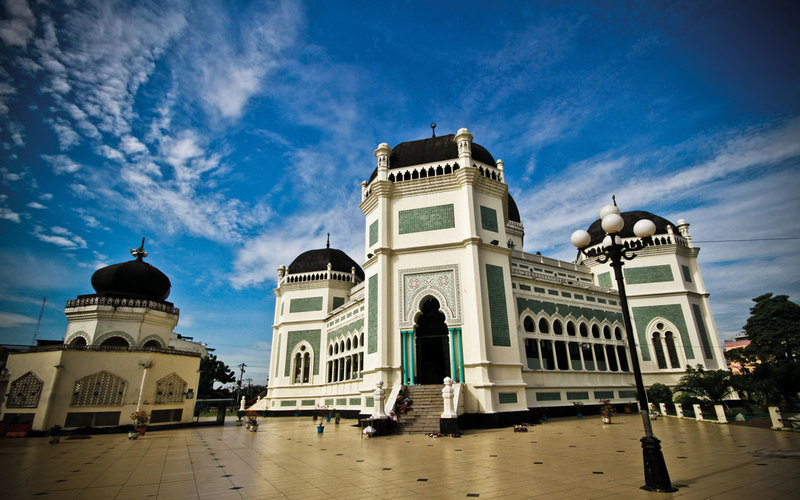 Not far from the mosque, a palatial grandeur of Maimoon Palace is very visit worthy, showing Medan also has strong Malay cultural ties. The palace is another Theodoor van Erp creation which used to lie within the same complex of The Great Mosque. Established in 1891, Maimoon Palace is a silent witness of the Sultanate Deli’s greatness.

The two-storey building boasts 30 rooms over an area of 2,772sqm and incorporates Persian and European architecture styles. Middle Eastern influence can be seen from the roof that resembles an inverted boat. Meanwhile, a touch of Europe can be seen in the wide lamps, tables, doors and windows, which are identical to typical European buildings. While the Dutch influence can be seen from the marble inscription in front of the stairs that read Dutch. Uniquely, this palace is dominated by the yellow colour as a symbol of the greatness of the Deli Kingdom in North Sumatra. This attraction offers visitors to dress up traditional Malay clothes, available at stalls inside the palace, pose like a Malay king and queen in the palace and take photos.

A historical jewel in Medan, Tjong A Fie Mansion is a must visit. Tjong A Fie was a merchant who left his hometown, China’s Guangdong province, and travelled to Labuan Deli—North Sumatra’s traditional port—in the Dutch East Indies to seek fortune. He established businesses in the island, producing sugar and palm oil as well as other big enterprises. What earned him widespread admiration, however, was his funding of public facilities in Medan, such as bridges, schools and places of worship.

His residence, Tjong A Fie Mansion, was built in 1895 and is now registered as historical landmark as well as a cultural heritage building and museum. The restored property occupying one hectare shows off a number of living rooms, a luxurious master bedroom, a photo gallery and a ballroom with their original furnishings. The mansion has Chinese, Malay and art deco influences in its architecture style. The structure was built observing feng-shui. The rooms are on four sides of the structures and surround a big open-air courtyard in the middle, signifying the ‘Well of Heaven’.

Tjong’s older brother, Tjong Yong Hian, was also involved in the city’s development, and his life is honoured at Tjong Yong Hian Gallery, a museum that houses memorabilia such as old photos, clothing and musical instruments that belonged to him. The compound’s garden is the highlight, consisting of ponds and manicured hedges.

Live up the tour with a slice of India, Medan has Kampung Madras (Madras village) which is also well-known as Kampung Keling. This Medan’s Little India is a home to the largest ethnic Tamil community in Indonesia. And just like the Indian village elsewhere, Kampung Madras becomes an interesting cultural tourism destination in Medan.

The origin of this village can be traced back to the 19th century. At that time many Tamil Indians were imported from their original country to work as laborers at Deli tobacco plantations. Plantation owners prefer to use imported labor from India because they were known to be hard workers and strong. As time went by, more Tamil Indians worked in Medan. In addition to working as plantation laborers, they also got jobs in the construction, and many also worked as traders.

The village was formerly know as Patisah. Initially, the streets in this area also used Indian names, like Calcutta road, Bombay street, Ceylon street, Madras street and others. But now there are many names were changed. The best-known places in this village are Shri Mariaman temple and Subramaniem Temple. There is also a mosque named Ghaudiyah which has a thick Indian architectural design. This is because the Tamil people who live in rural villages are not only Hindus but also some Muslims.

Craving some roti canai flatbread? The stalls in this neighbourhood are sure bets for this and numerous other Indian-influenced dishes like famous Indian curry and martabak or chapatti. If you’re in town during one of the big Indian festivals, such as Festival Colour (Holy), Deepwali and Adimahapuja celebration, you’ll find all the vibrant celebrations here. 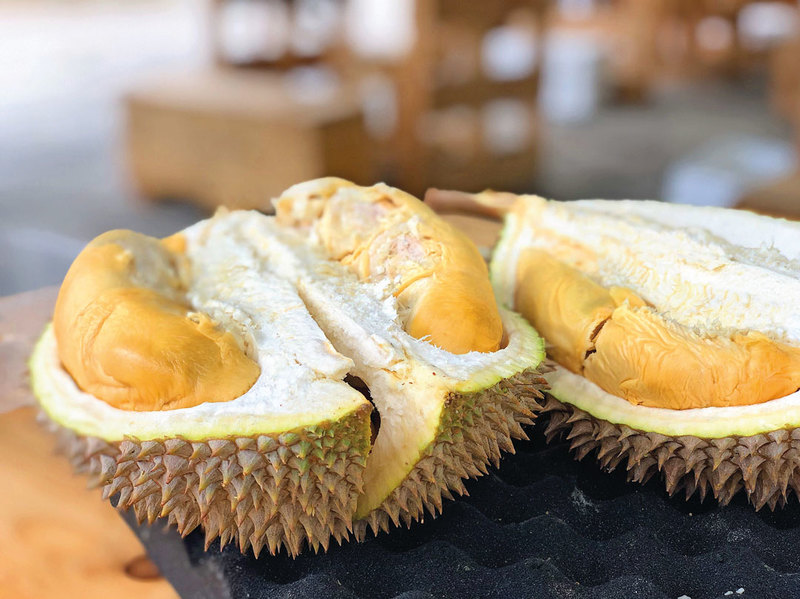 Tourists come to Medan to explore its rich culinary scene especially to enjoy durian in any season. You can go to Jalan Iskandar Muda to reach Durian Ucok or Jalan Sunggal to taste durian at Kedai Durian Pelawi as well as Kedai Mei Cin on Jalan Ketapang to grab durian pancake.

One of the oldest traditional coffee shops in the city, Kedai Kopi Apek, across from Hindu market is good recommendation. The shop offering coffee that uses Arabica beans sourced from Sidikalang, a small city in the province famous with its coffee beans. The toast with homemade kaya (coconut egg jam) is prepared on a firewood stove, a great pairing while you enjoy the coffee.

If you prefer something more filling, try Soto Medan, a Medan-style soup made with coconut milk. RM Sinar Pagi on Jalan Sei Deli has been selling the dish since 1962. Beside serving soto, tourists can also order Nasi Pecel (rice served with various boiled vegetables poured with spicy coconut sauce) and Lontong Sayur (rice cake with vegetables). The restaurant is open from seven in the morning until three in the afternoon.

Also, don’t miss tasting Bihun Bebek Asie on Jalan Kumango. It serves Chinese-style duck vermicelli soup with a generous portion of shredded duck meat in duck broth, along with fried garlic and mustard greens. Of course, those places are only a small part that Medan has. It’s not enough to just overnight in Medan to satisfy your culinary adventure. The city, tirelessly, calls foodies to enjoy its culinary treasures.

The controversy of reimposing the large-scale social restrictions creates a dilemma to save Indonesia’s economy from shrinking further as the country expects a recovery in the last quarter of 2020.

A Worry-Free Holiday with Meliá Bali

Happiness Within The City

Starbucks’ Plant-Based Beverage is in This Autumn

President Joko Widodo at the UN General Assembly Address: No Country Should be Left Behind

Indonesian Companies Considering Remote Work Until Mid-2021, or Even Forever

How Artists Can Adapt to Virtual Performing Arts