Leaning over the sturdy railing at the waterhole, I made sure to look up to check no lazy cats were lounging in the trees above me. This was Macan Tutul country – home of the Javan Leopard in Baluran National Park, East Java. I asked the ranger, Pak Teguh Wicaksono, if he had personally come across any wild cats.  “Yes, indeed I have,” he said.  “As part of my ranger duties I must study, observe and understand the leopard population.” The next part astounded me. “I sit up in a tree for four days at a time. That one right there”, he said, pointing up at a tall sturdy tree. “This is a popular waterhole, so the chance of spotting wildlife here is very high. 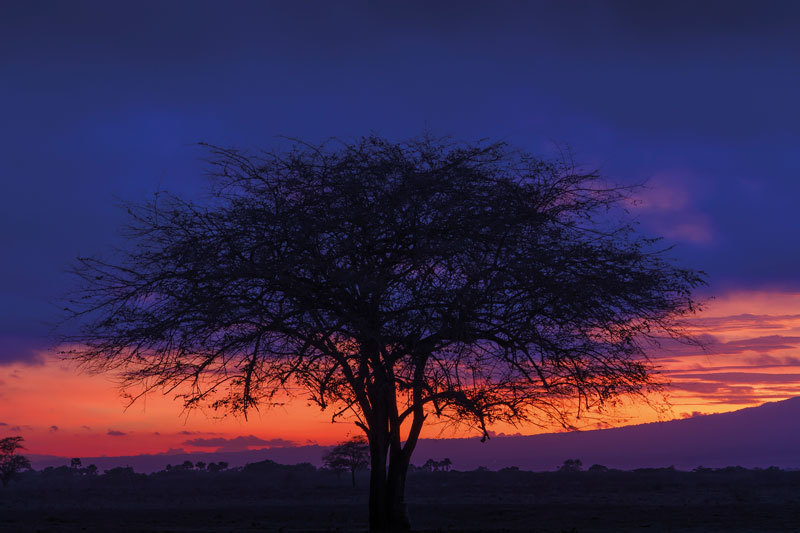 It’s a great place to conduct an animal census. I have to be tree-bound – that is, eating and sleeping up there. My feet are not allowed to touch the ground the entire time,” he continued. “The leopards cruise through this area, and if they could sniff me out – a predator in their mind, they would simply take off or attack me. So I must become part of the tree, camouflaged in the branches the whole time. I only eat rice so my food won’t smell. I even have to pee into a plastic bag and keep that stored in my backpack. If I urinated on the forest floor, this would mark my spot and would be a dead give-away. I represent danger to a leopard and I am armed - just in case.”

It turns out that, in his four years of working in the national park, Pak Teguh has done tree duty several times. “We study alone. It is our job to collect data,” he added, “I am happy to dedicate myself to this work, and I am learning all the time.”

The Baluran National Park is a unique landscape comprising of grassland that stretches across most of its area – some 25,000 hectares. A dormant volcano, Mount Baluran rises to 1,247 metres and dominates the landscape. The best view of the park is from the Watchtower at Bekol, where you can look out over endless savannah, acacia scrub and lowland forests and see as far as Bali.

The park is fringed by stunning coral reefs and only 15 kilometres (one hour) along a rough road leading from the main entrance you can access Bama Beach, a beautiful white sandy stretch of sand. It is very safe for swimming and an excellent snorkeling spot. However, the facilities are very basic. In fact, when we visited mid-week in February nothing was open. Our homestay owners had advised us to have lunch at Bekol, so luckily we didn’t arrive at midday expecting beachside warungs to be open. The chalets at Bama Beach are terribly run down, so it’s much better to sleep overnight in Wonorejo. 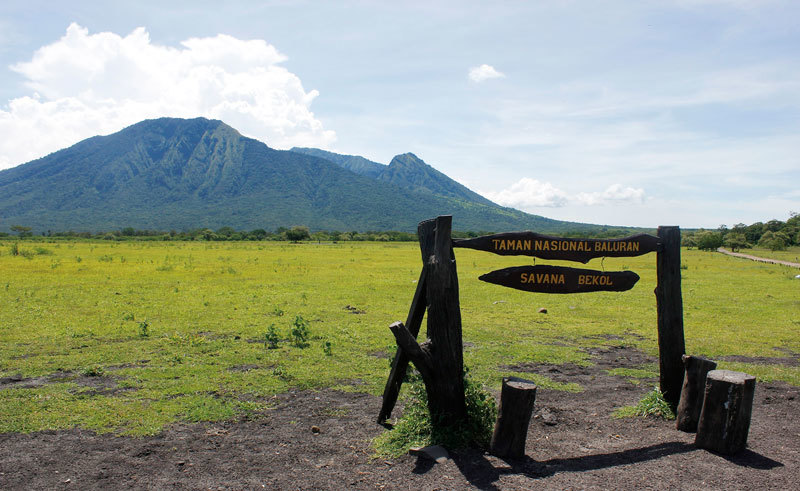 Wonorejo is a sweet little village just outside the park with an excellent choice of homestays, some of which have swimming pools. The highlight is the drive through the interior of the park, so it makes sense to stay just outside the park and enter the park daily for exploration. If travelling by car does not appeal, take the freewheeling easy rider option, and rent an ojek (motorbike and driver).  This can easily be arranged in Wonojero beforehand. Why not get adventurous?  It’s a safari park after all.

The first written records about Baluran are from 1928, when Dutch botanist A. H. Loedboer noted the numerous types of flora and fauna in this remote corner of East Java. Baluran was given national park status in 1984, but so far it hasn’t provided the sort of facilities that could potentially bring in thousands of tourists a day. Let’s hope it stays this way. 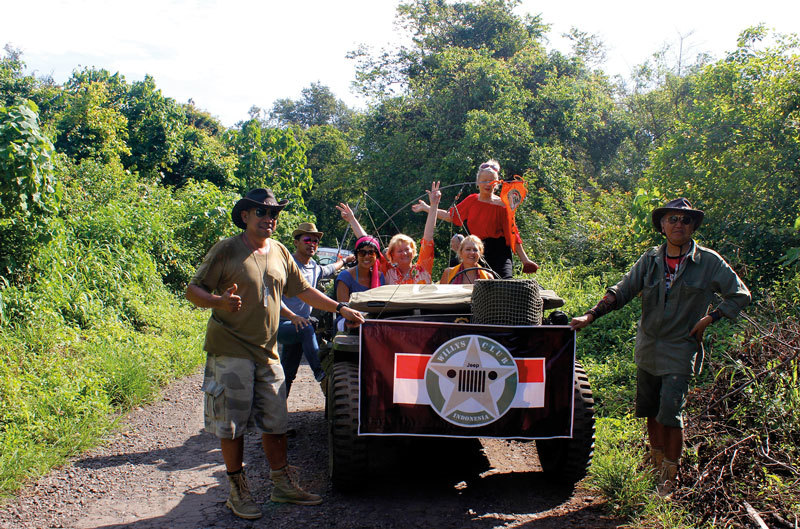 For ten months of the year visitor numbers are low and you will pretty much have the park to yourself. High season is July and August, and it can be very busy with tourists and troops of forestry volunteers. If you can avoid this time, it is best. Pak Teguh also told us this is also a popular time for film crews to come and shoot movie scenes. Korean and Bollywood stars have come to the park in dry season, and film crews like to use the stark savannah plains as a natural backdrop. Being low season (February), when we visited, we saw only a handful of cars all day and only eight motorbikes during the whole ten hours we spent in the park.

Because a ranger escorted us, we had permission to stay until dark. Normally the park gate shuts at 4.00 pm but Pak Teguh made us an offer we could not refuse.  “Do you want to stay past sunset and go on a night safari?” he asked. “We have a much better chance of spotting wildlife, as the animals will be out hunting in the twilight. I will go ahead on my motorbike and make sure all is safe,” he assured us, “Don’t worry - you are in good hands.” 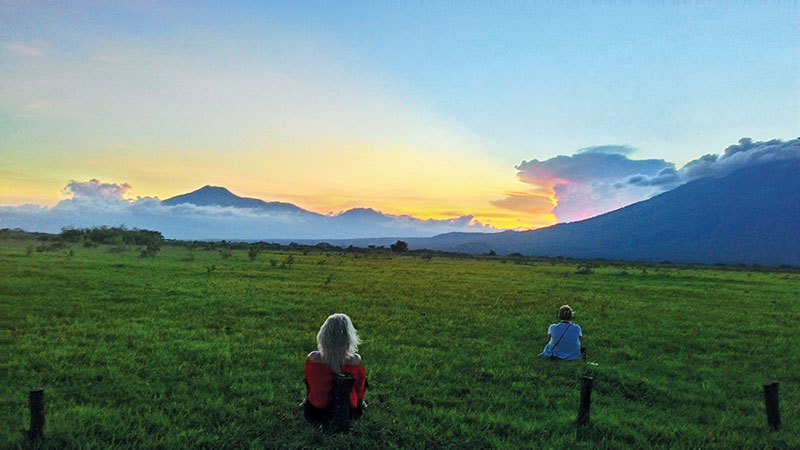 Well, who could resist that?  Without further ado, we agreed and had dinner packs made up to take along with us. We filled in our afternoon with swimming in the crystal clear aqua-blue waters at Bama Beach.

We left at about 5.00 pm in search of a good sunset spot and eventually settled on a wide-open blanket of savannah grassland which rolled out to meet the faraway dominant giant on the skyline – Mount Baluran. We spotted a large herd of Javan Rusa Deer grazing and encountered one lone water buffalo slurping greedily at a nearby waterhole. As dusk settled around us, a most spectacular sunset started to light up the plains. Vivid hues of purple kissed the mountaintop and burnt orange splashes swept across the vast open skies. Just as the outline of the lone mountain formed a perfect silhouette against the darkening sky, a flock of wild peacocks appeared and made themselves busy settling in to nest for the night. They chose the top branches of the highest tree. Peacocks can fly up to 100 metres, and three of them changed their mind after settling and took flight, fancying an outer branch on an adjacent tree. Watching the dramatic and elegant flight of the peacocks was a first for me. It was an impressive sight to witness. 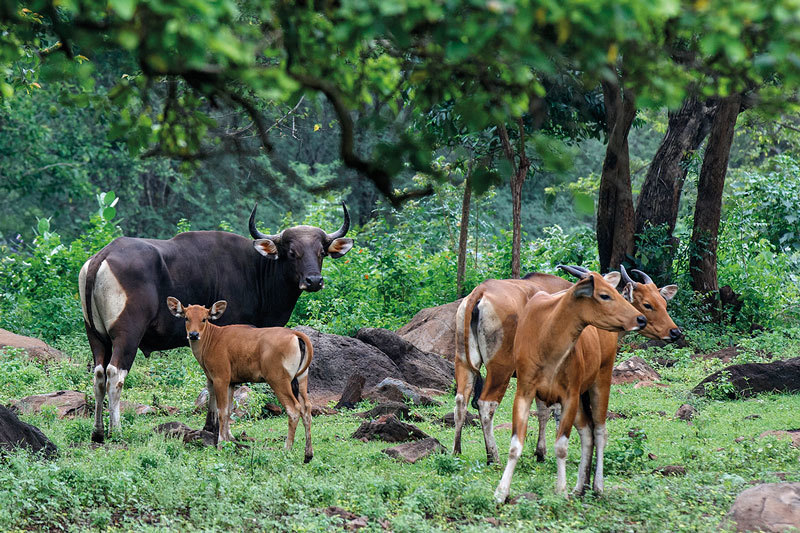 On discussion with our enthusiastic ranger friend, we decided to return to see the peacocks when mating season is in full swing, around September to December. This is when the male peacocks parade their verdant green and purple long tail plumes and sound their loud wailing cries in the hope of attracting females. In Indonesia, wild peacocks are only found in two national parks, located at either end of Java. As well as hearing about peacock antics, we were also told a tale about Elizabeth, a 50-year-old turtle who swims to Australia every year and returns to the shores of Baluran to lay her eggs once a year. She has become quite famous, with her journey for hundreds of miles across the seas now tracked with the help of a microchip under her skin. 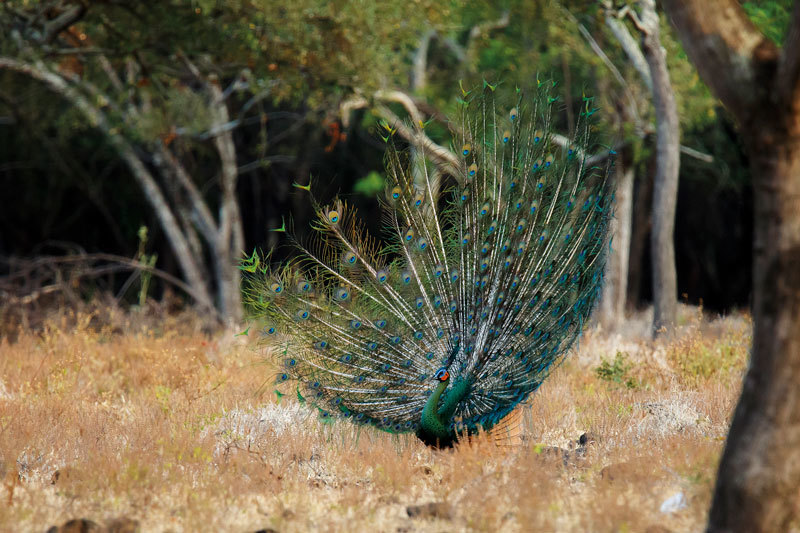 Just to top off the day, we saw two huge Oriental Pied Hornbills swoop gracefully across the skyline. As we settled in to watch the last remaining sunset colours dance across the sky, we reflected on our day. This included many sightings of jungle fowl and watching the playfulness of the numerous groups of long tail Macaque Monkeys moving on mass through the grasslands. In total, we saw nine different species of wildlife and birds, including a family of Lutungs and a Crested Serpent Eagle. Our night safari only turned up one snake and an empty tree hollow where we were told a leopard often sleeps. Alas, we did not see the elusive Macan Tutul on this occasion. However, we did see leopard paw prints, so contented ourselves with that. It was after 9.00 pm when we got back to the homestay, utterly exhausted though still elated about our eventful day spent in a very beautiful wilderness park tucked away in the far east corner of Java. 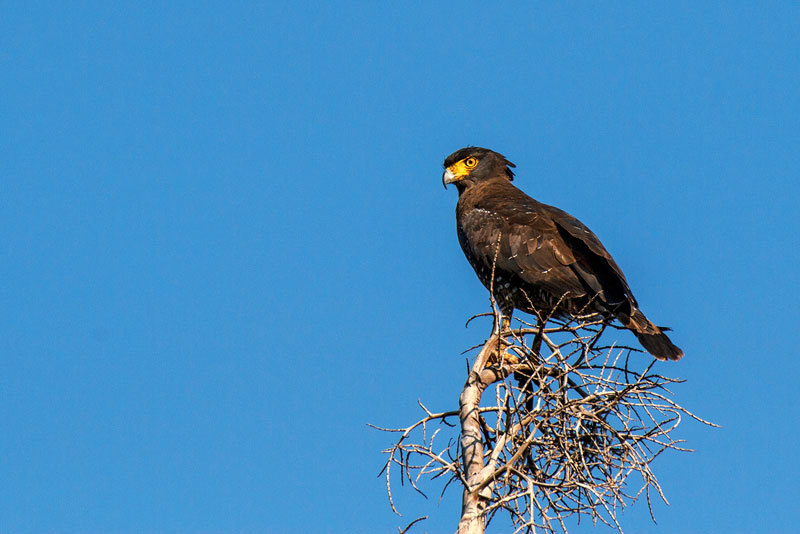 Baluran National Park, East Java
Baluran National Park is located in the driest corner of Java. The best time to visit is the dry season (June to October) when the grazing animals are at their most visible. It can rain heavily in January and February, and the park may close if it is impassable due to flooding.

Banteng
The Banteng, also known as Bali cattle or Javanese ox, is native to the area.  It is the official emblem of the park. They are rare nowadays and their numbers have dwindled from 338 in 1996 to just 26 in 2012. They compete for food with the buffaloes and deer, and they are also very shy. 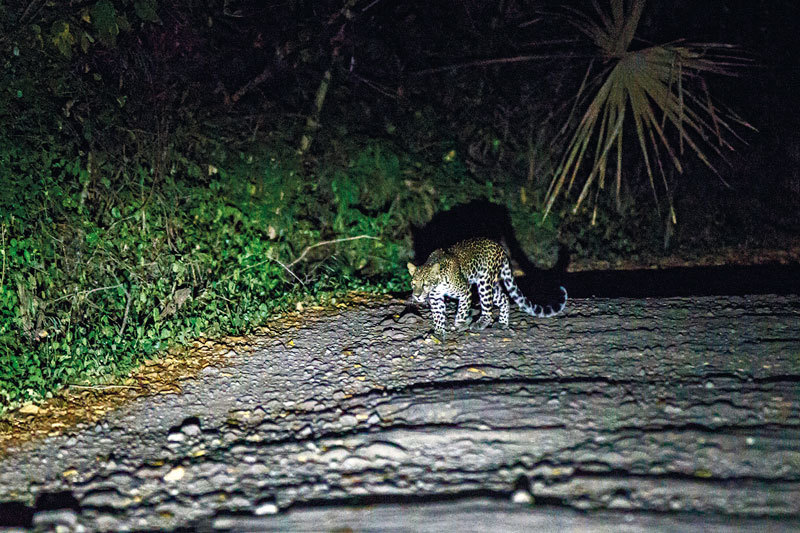 Bekol Savannah - Ask for a free map from the park office. Bekol is located 12 km from the main gate. It is the key viewing point for the herds that gather to drink at the waterhole. You can really imagine you are in Africa as you gaze across dry savannah against the backdrop of Mount Baluran. There is also a Watchtower, which affords panoramic views of the park. A small warung at Bekol serves hot food, drinks and snacks.

Bama Beach – Located 3 km from Bekol, this white sand beach with good live coral close to the shore provides splendid snorkeling. There is some very basic beach cottage accommodation, which is often closed. There are limited food services here in low season and mid-week.