The Joys of the Harvest Festival in East Belitung

While Belitung island is unquestionably home to the most secluded and beautiful collection of beaches, it’s also remarkably known for diverse cultural heritage, ranging from thanksgiving celebrations to folk festivities. This year, the province successfully held its most anticipated event, bringing in more than 4,000 visitors.

Harvest is a festive occasion in all the rice growing countries. Here in Indonesia, it is celebrated by different names in various regions such as Gawai Dayak in Kalimantan, Pacu Jawi in West Sumatra, Seren Taun in Sundanese traditions, Wiwitan in Bantul, Jogja and Demak, and Maras Taun in Belitung. Most of these festivals last for 4-5 days.

Harvest celebration in Indonesia commonly features feasting both within the family and in public with foods from the recent harvest around the time of the festival. In addition to featuring dozens of traditional delicacies, the celebration usually involves a series of intricate ceremonies to unusual harvest rituals. Some regions are devoted to hold the festivals to appease different objects of worship, such as cattles, ancestors, and deities whilst others mostly focus on giving thanks to the spirits for the success of the harvest in a form of cultural performances. In Java, for instance, farmers host puppet shows to celebrate harvest to remind humans of their divine origin and the sacred nature of crops and the importance of presenting an offering to Dewi Sri (the goddess of rice and fertility). 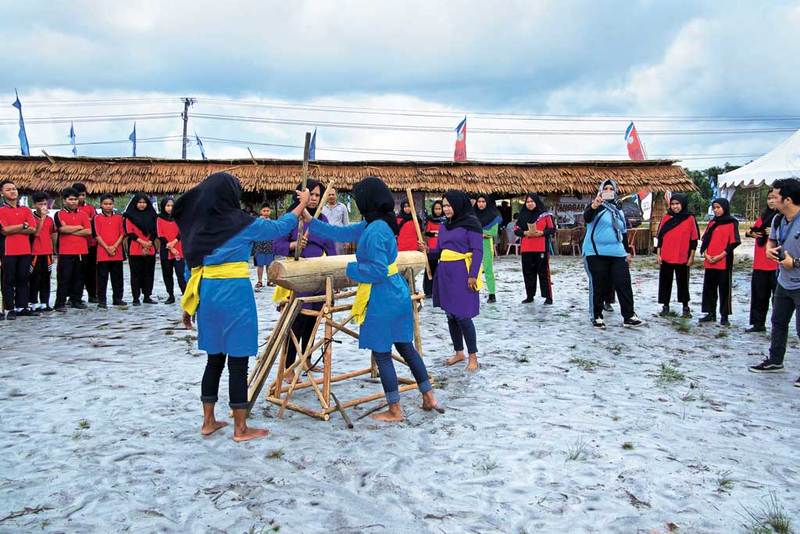 In Belitung, the harvest celebration, also famously known as Maras Taun, carries out four elements of cultural attractions; a performance of Melayu folk dance, interesting traditional games, a demonstration of ancient martial art and a ritual to welcome the harvest festival, which is extremely important that it becomes the main concern of the entire Maras Taun festival.

Maras Taun is celebrated in Belitung in the form of a ritual called Ngemping Padi. This ritual takes place at the end of April between 20 - 26 April with a huge feast. NgempingPadi is the tradition of celebrating the importance of rice cultivation to the village. The ceremony underlines the significance of being grateful for the previous good tidings and for the bountiful harvest that has been given.

Ngemping is derived from the word ‘emping’ which means rice flakes. NgempingPadi has the meaning of the process of making rice flakes. Young rice grains are roasted in the husk then pounded in a mortar grinder and later winnowed. The flattened rice grains formed a kind of cracker and are called emping, and usually served and eaten with palm sugar or coconut milk. Back in the days, emping was considered a great delicacy, especially the arrival of modern treats biscuits. Emping or crackers had since then become a main course for breakfast.

The ritual of NgempingPadi is often accompanied by a ritual or musical performance. There is only one instrument involved in this music, the Lesungor rice mortar which is hit by 3-4 players using special mallets named Alu or rice stamper. The sound Alu makes indicates rice flakes being pounded while bundles of rice stalks are laid under the mortar to make the pounding sound more booming.

According to the locals, the ritual of Ngemping Padi used to be popular in Belitung back in the Dutch colonial era. However, the aim of Ngemping Padi is not so much to make rice flakes, but rather to show off people’s dexterity and coordination in using a number of pestles and producing melodious tunes while pounding the rice in the mortar. All of the players will sing traditional songs and keep the rhythms in harmony in many different pitches. During this process, the farmers play the music while they are working.

In addition to having accompanied by the musical performance, there are several things that make NgempingPadi a much-anticipated and memorable event. Ngemping Padi can also be enjoyed with other cultural performances such as Belitung traditional games called Lesong Ketintong and Alu Besantok and Belitung ancient martial art of Debus named Maung Pande. Not only is Ngemping Padi intimately related to the long and deep relationship of agriculture in Indonesia, but the ritual is also believed to invite the good spirits to come down to earth, bless the rice seeds and keep off bad lucks and misfortunes. Taking place at several venues in East Belitung Regency, this year’s celebration was held on 22 - 28 April.

Evi Nardi, Head of Culture and Tourism Office of East Belitung stated, “Ngemping Padi is a truly sacred occasion that involves prayers for a good harvest. It is simply the days of giving thanks for the blessing not only of the harvest but also of our efforts, and of the preceding year. This celebration has been part of Belitung local wisdom. Belitung Timur has so much to offer. Through tourism and culture, intriguing destinations like Belitung can become more attractive in the eyes of local and global travellers. We also hope that today’s generation of young people are more informed by the importance of their local wisdom as well as cultural tourism.”