While Dubrovnik is without a doubt the city that attracts the biggest number of tourists, there are many more enthralling places to explore and discover along Croatia’s Dalmatian Coast.

Due to its central location and international airport, Zadar has long been a popular gateway to Croatia, but this city is much more than just a place to pass by.

In fact, Alfred Hitchcock visited Zadar in May 1964 and was spellbound by the charm of the city and its sunsets in particular. The famous film director and producer who during his stay in the city observed the sunset daily from his hotel room, said, “Zadar has the most beautiful sunset in the world, more beautiful than the one in Key West, Florida, applauded at every evening.”

One can only hope that Hitchcock not only waited for the sun to set in the evenings, but also took the time to take a stroll during the day, because Zadar is so much more than stunning sunsets and breathtaking landscapes. Its historical significance becomes evident when entering the Old Town, the oldest continuously inhabited Croatian city. Its urban structure dates back to Roman times: the city walls, towers and gates were built during the times of Julius Caesar and Emperor Augustus, and some of the most important landmarks have been preserved until today, including the Roman Forum, the Church of St. Donatus, St. Anastasia’s Cathedral, the Citadel and St. Mary’s Church.

The Old Town may be small in size, but there is plenty to see and explore, and a stroll through its cobbled lanes and alleys feels like stepping back in time. However, Zadar has also well adapted to the changing times. The famous Sea Organ, for instance, an architectural sound art installation by Nikola Bašić, was opened to the public in 2005: various tubes that are located under large marble steps interact with the waves, creating somewhat random but harmonic sounds. Every day, tourists and locals can be seen sitting on the steps, lost in thought or listening carefully to the sound of the sea, while little children curiously try to get to the bottom of this peculiar “instrument”.

The Monument to the Sun radiates an even more modern, almost futuristic feel. Located next to the Sea Organ, it consists of 300 multi-layered glass plates in the shape of a circle, representing the sun, while the smaller circles placed around the main installation constitute the other planets of the solar system. Beneath the glass plates, solar modules with lighting elements make for a unique light show in the evening, resembling an open-air discotheque where everyone is welcome to join in for a dance.

Most travelers make their way from Zadar to Split, but again, hidden gems are to be found along the scenic route. One such marvelous town is Trogir, set within medieval walls on a tiny island, enchanting in every way: its Old Town and historic centre was included in the UNESCO list of World Heritage Sites in 1997.

We visited on a day when the wind - also called “bora” - blew cold and heavy in Trogir. While the weather certainly didn’t diminish the beauty of the town, the stroll along the promenade offering a view at the many ships and yachts that make a stop here, was a struggle, to say the least. But upon entering the city gate, all was forgotten. Drawing from Greek, Roman and Venetian influence, Trogir boasts many historical buildings, from the Fortress Kamerlengo and the Duke’s Palace to the Cathedral and the city loggia.

After visiting the main sights, we explored the smaller, more deserted streets off the beaten path and came across tiny squares, balconies, backyard stone stairs filled with beautiful flowers and artworks and stray cats chasing each other. Looking up, we could see laundry hung out to dry on clotheslines between the windows of different buildings - it was almost too picturesque to be true.

From Trogir, it is only a 30-minute drive to Croatia’s second largest city, Split, which sits majestically on the eastern shore of the Adriatic Sea with a lovely seaside promenade. The main attraction of Split is Diocletian’s Palace, an ancient palace built for the Roman Emperor Diocletian at the turn of the fourth century AD. Diocletian built this fortress so he could spend his days of retirement in peace - half of the palace housed his personal lodgings, while the rest was inhabited by the military garrison. Today, around 3000 people live on the territory of the palace. 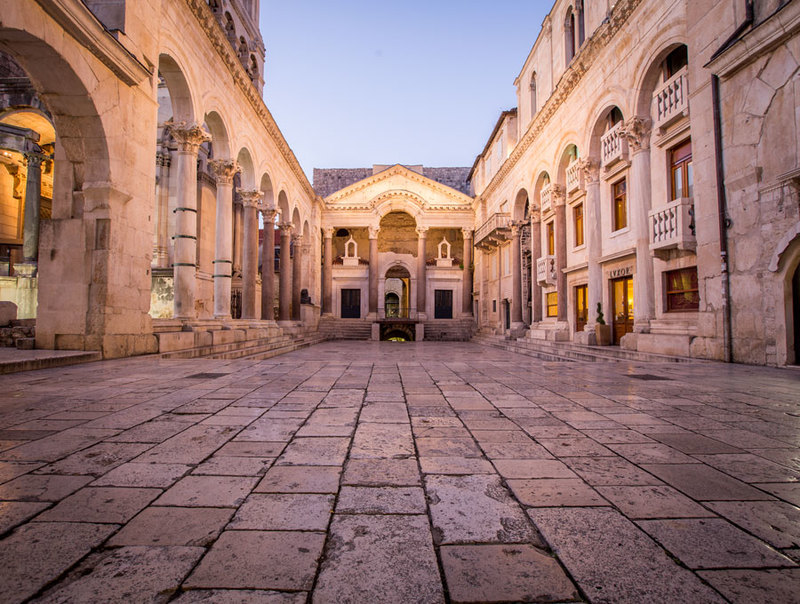 When the Roman Empire fell apart and existing Roman cities were under attack, the citizens sought refuge behind the walls of the deserted palace. Not being able to go anywhere and confined within the palace walls, they dug holes into the floors, which they used as toilet and garbage pits. As tour guide Dino Ivančić explained rather vividly, these holes and rooms were forgotten about until excavated by archaeologists - funnily enough, it is thanks to feces and garbage that the underground rooms survived and provided a model for the upper structure. They recently came into spotlight again in the popular TV show Game of Thrones, where they served as the dungeons for Daenarys Targaryen’s dragons.

Dino shared a similar mind-blowing story once we entered the palace. According to the history buff turned guide, the Romans spent most of their days indulging in food. Once they were so full that they couldn’t eat anymore, they’d move to the “vomitorium” to throw up and continue eating afterwards. This became evident when the archaeologists found the skulls of the rich, he said - they were missing most of their teeth. The slaves who had to tickle the emperor’s throat with a feather, on the other hand, still had a great set of teeth.

A monumental court, called the Peristyle, served as access to the imperial apartments to the north and Diocletian's mausoleum on the east - now the Cathedral of St. Domnius. The ceiling of the Vestibule - the entrance to Diocletian’s apartment - collapsed over time and has never been restored, therefore sunlight fills the chamber during the day. When we visited, a choir was performing in the Vestibule, filling the space with wondrous melodies.

Emperor Diocletian persecuted and killed thousands of Christians. After his death, they destroyed pagan symbols within the palace. That’s why most of the sphinx sculptures that had been brought back from Egypt by the Emperor are decapitated. Despite the bloody and hair-raising stories we heard, the Diocletian Palace experience was glorious - what a terrific way to dive into the history of Split!

Another village worth visiting on the Dalmatian Coast is Ston. Located on the northern edge of the Dubrovnik-Neretva region, Ston may be small in size, but it is a trove of cultural heritage, and it is also a haven for true gourmets as it is home to incredibly precious oysters. It is therefore not surprising that the region of Ston boasts many first class restaurants that whip up delicious food – mainly oysters, mussels, ark shells and many more, served either fresh or in pasta and risottos.

Ston is also famous for its saltpans. Salt was a commodity as valuable as gold throughout the centuries: it was scarce because it was very hard to extract, but at the same time it was essential as dietary requirement and to preserve food. Salt was in fact so valuable that it was often used as a currency or method of payment – hence the origin of the word salary, or salarium in Latin.

The saltpans in Ston – that are still producing salt today, using century-old techniques – were first built in the 14th century when the Dubrovnik Republic gained control over the Pelješac peninsula. The salt production quickly added to Dubrovnik’s wealth and became the backbone of all trading efforts in the region. To protect the saltpans was suddenly of utmost importance and thus began the construction of a wall.

The wall, which today is 5.5 kilometres long and links Ston to Mali Ston, has the shape of an irregular pentangle. It almost took a whole century to complete the construction of the wall, along with its 40 towers (of which only 20 have survived) and five fortresses. It is said that the process was so lengthy because the working conditions were anything but ideal: the shallow sea around Ston turned out to be a perfect breeding ground for mosquitoes, making malaria epidemics a regular occurrence in the area. Climbing these walls today, however, not only makes for a short workout but also offers panoramic views of the ravishing Dalmatian Coast.

This article is part of a series of stories about Croatia. NOW! Jakarta joined a media trip to Croatia in October, which was sponsored by Turkish Airlines, the Croatian National Tourist Board and local partners.