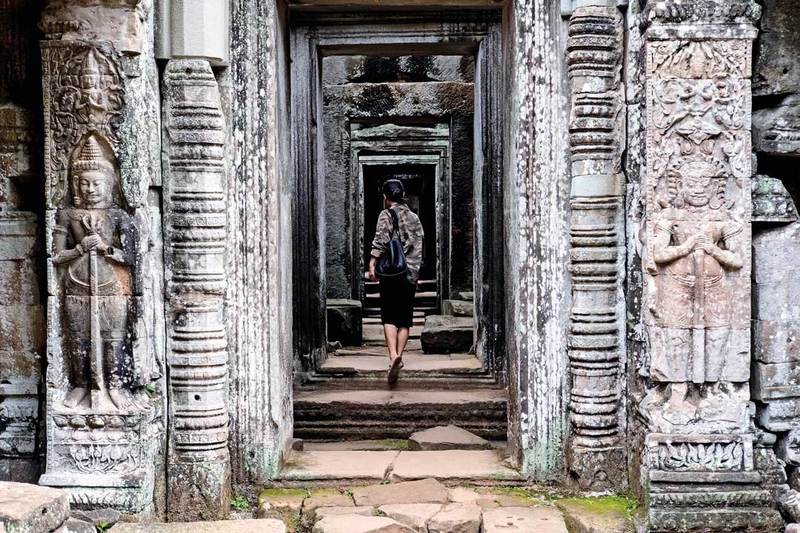 You’ve heard of Angkor Wat, and so have the millions of people that visit the temple every year. However, a destination should not be defined by a single site, as I discovered on a recent, eye-opening trip to Cambodia’s cultural capital, Siem Reap.

With a history comprised of an ancient civilisation, colonisation, civil war and more, the Kingdom of Cambodia has many stories to tell. Siem Reap in particular is a melting pot of the old and new, where physical structures are the timestamps leaving clues of the past.

Upon entering Siem Reap, I noticed straight away this dichotomy of past and present. The open highway showing a juxtaposition with imported cars next to ‘tuk-tuk’s and the occasional buffalo. This was part of the charm, though. Whilst Siem Reap has surely accommodated for modern comforts, it still has this atmosphere of a simpler, almost nostalgic past. 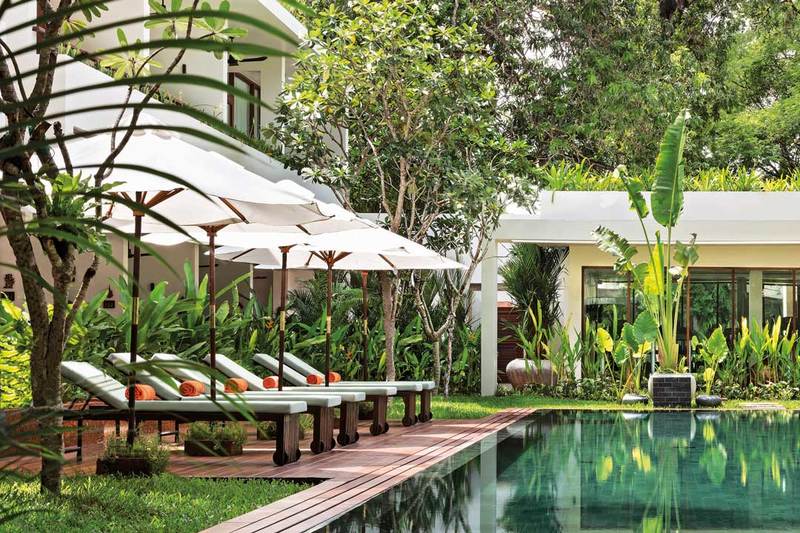 I stayed in the newly renovated FCC Angkor - Managed by Avani Hotels & Resorts. What used to be the meeting point for international journalists, establishing the region’s first Foreign Correspondents Club (FCC). Many stories have been told, shared and written here.

Standing beside the Royal Independence Gardens and Royal Residence, it is itself a piece of history. The central building was the former mansion of the French colonial governor, now repurposed into the hotel’s restaurant - called The Mansion - where classic French shutters and an impressive colonial balcony open up to a view of the Siem Reap River.

Boutique and intimate with only 80 rooms, FCC Angkor appeals to a new age of traveller, those that aren’t looking to lounge all-day by the pool, but instead want to explore their surroundings and immerse themselves in local experiences. Knowing this, the hotel has curated explorations off the regular tourist trails, aimed at giving guests a more authentic approach to discovering Siem Reap’s history, heritage and even human experiences. 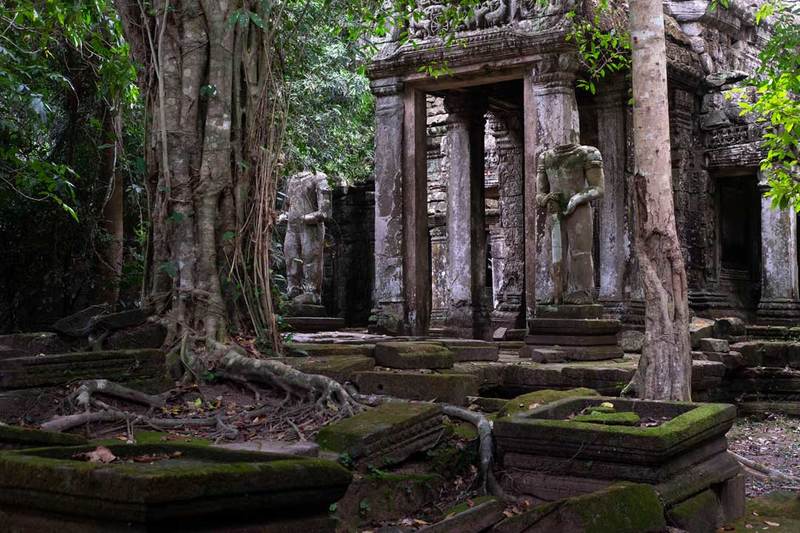 Off the tourist trail

A visit to the Angkor complex is unavoidable, especially for Siem Reap first-timers such as myself. Though I had been forewarned that mass tourism now afflicts the ancient Hindu-turned-Buddhist monument.

Luckily I was in good hands. The hotel had put me in touch with Regis Binard, a French travel and humanitarian photographer who has called Cambodia home since 2011. As a photographer, it was his forte to find hidden gems away from the masses.

First, perhaps as a way of comparison, Regis took us to the entrance of the Angkor Wat temple. Buses of people had already arrived, making their way across the bridge towards the five magnificent towers in the temple. Needless to say, we did not join them.

2.6 million tourists visit Angkor Wat every year, but almost all of them are taken to the same areas and sites. What many don’t realise is that the whole Angkor complex is 162.6 hectares, within which other smaller temples can be found.

Back in the car, we drove through this giant, ancient complex. Once the old capital city of the Khmer Empire, different temples are connected by roads, where stone-carved bridges and gates mark an entrance into each new area.

We stopped on the side of the road, no temple in sight. “Okay, from here we go on foot”, said Regis. We jumped out and walked through an opening in the trees into the Cambodian bush. We hiked a local trail with nothing but forest around us, spotting small, neglected ruins through the vines and branches. 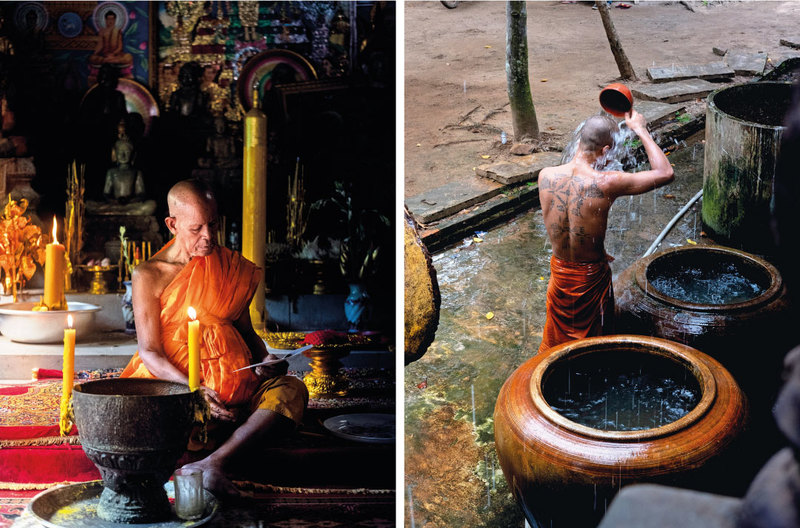 We reached a back gate to ‘Preah Khan’, a small temple in the Angkor Thom district. It felt as if we had ‘discovered’ it for ourselves; finding our way through the forest like explorers, stumbling upon a long-forgotten treasure.

We walked through the gate and came to the temple itself. Statues stood in silence at its entrance, the main building had been taken over by nature; stone covered in moss and trees bursting through cracks. Yes, Preah Khan lay in the shadows of the impressive Angkor Wat, but the sense of discovery, the ability to wander through the pathways and rooms of the temple without a soul in sight was worth the sacrifice.

Regis then took us to a local monastery, found next to yet another small temple - Preah Pallilay - within Angkor Thom. Swathed in orange, the Buddhist monks had just finished a water ritual and a local Cambodian family were receiving a blessing. We took a moment to observe quietly, feeling blessed to have had an opportunity to experience this ancient site in peace and to have a moment to see the local monks go about their daily activities. 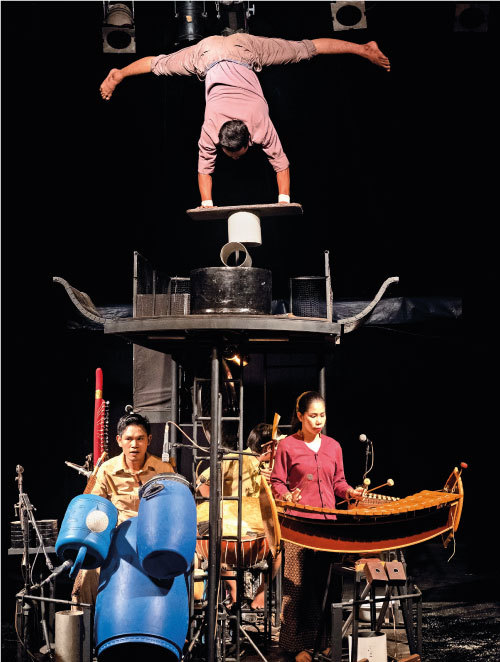 Despite rising tourism, many are still left in marginalised in the wake of Cambodia’s troubled past. However tourism now intersects and seeks to improve these effects; I discovered that there are many amazing experiences in Siem Reap that also aim to give back to and empower the local population.

The most impressive was Phare, The Cambodian Circus. Whilst many of the backpackers head to Siem Reap’s Pub Street at night, FCC Angkor suggested Phare would be a more rewarding experience. Akin to Cirque du Soleil, the shows is a truly impressive display fusing art, music, acrobatics and drama into a story created by the performers. The performers are all graduates of Phare Ponleu Selpak, a non-profit arts school located in Battambang, offering support to children, youth and the surrounding communities through artistic, educational, social and community outreach and engagement programmes. Each night a different show is performed, telling different stories of their lives, using this exciting artistic medium to express themselves. 75% of the show’s profits are used to continuously support the school.

Staying on the arts, we visited The Tribe, a contemporary art gallery found within Kandal Village, a notoriously cool and creative neighbourhood where artisanal shops dot the quaint alleyways near Siem Reap’s French Quarter. The aim of the gallery is to uplift Camobodian artists, as founders Nat Di Maggio & Terry McIlkenny explained. The bottom-floor houses a bar and gallery, whilst upstairs is a workshop, providing space for upcoming local artists like Morn Chear, a Cambodian who lost both his arms (elbow down) and now creates stunning lithographs.

After exploring Siem Reap and all it has to offer, I would ease back into the grounds of FCC Angkor. If the sun still lingered I took a dip in the pool, a long and leisurely spot surrounded by the hotel’s gardens. If not, then a drink, either at Scribe - the aptly named bar in the front courtyard facing the French colonial building - or inside The Mansion, where a classic bar served up a selection of some of Cambodia’s now growing craft beer scene. Here I would also indulge in some local cuisine - the street food scene isn’t as prominent (or trustworthy) in Cambodia in comparison to its Southeast Asian neighbours - luckily the Chef knew how to prepare a tasty Khmer Amok (coconut curry cooked in banana leaf) or Khmer Lok Lak (a local beef stir fry).

After the day was done, it was back to the room. Stylish and comfortable, with open windows and a balcony overlooking the pool, the rooms play to the hotel’s history, decorated with antique trinkets like the old wind-up telephone magneto or retro FM Radio. The most charming feature of all is that every room features an old typewriter. Whilst it is an homage to the hotel’s Foreign Correspondent Club background, it was also a prompt, as if to say “do you also have a story to tell whilst you’re here? Then write one…”

There is no doubt that Siem Reap still had more secrets and stories to share. They would have to wait for another trip.