The United Arab Emirates: An Introduction

The United Arab Emirates, sometimes referred to as UAE or Emirates, was established in 1971 and consists of seven emirates: Abu Dhabi (which serves as the capital), Dubai, Sharjah, Ras Al Khaimah, Ajman, Umm Al Quwain and Fujairah. Four-fifths of the UAE is desert but has contrasting landscapes—from the towering red dunes of the Liwa to the rich palm-filled Oasis of Al Ain, from the precipitous Hajjar Mountains to the more fertile stretches of its coastal plains. 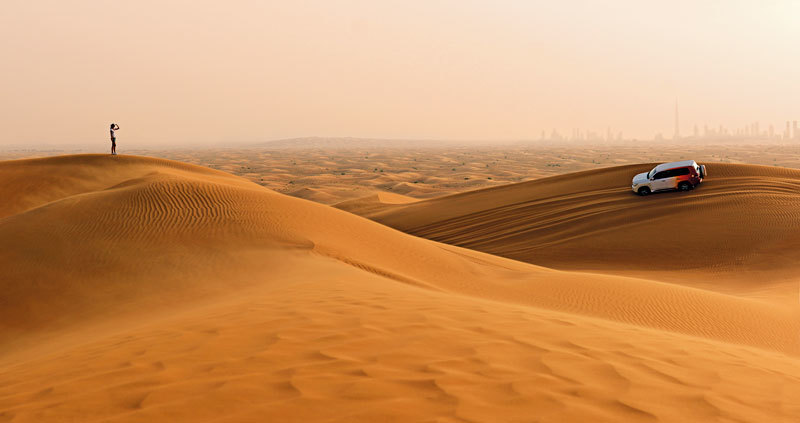 Though small in size, the UAE has become an important player in regional and international affairs. In 1971, the late President Sheikh Zayed bin Sultan Al Nahyan unified the small, underdeveloped states into a federation—the only one in the Arab world. With his visionary leadership, oil wealth was used to develop the UAE into one of the world’s most open and successful economies.

Before the discovery of oil, the region depended on a simple economy, mainly on nomadic farming, date palm cultivation, fishing, pearling and seafaring.

The discovery of oil in 1958 led to a significant transformation in the economical, as well as the social life in the UAE. Within a short period, the UAE’s GDP increased more than 236-fold from AED6.5billion in 1971 to AED 1,540 billion in 2014.

Currently, the UAE has the world’s seventh largest reserves of both oil and natural gas, estimated at 97.8 million barrels and 215 trillion cubic feet respectively. This means that it holds 4 per cent of the world’s oil reserves and 3.5 per cent of gas reserves.

Revenue from oil resources has allowed the government to initiate significant social and economic development in its industries and infrastructure. Owing to government’s efficient policies, today, the UAE’s non-oil sectors contribute to more than two third of the country’s gross domestic product (GDP).

Despite recent fluctuations in oil prices and global economic recession witnessed through different periods, the UAE provides a safe, stable and attractive economic environment based on the following features:

It enjoys a strategic location between Asia, Europe and Africa; the world’s fastest developing economies. Thousands of Chinese businesses use Dubai as a hub for Africa. Indian traders use the emirate to access the world. Latin Americans see the country as a launching platform into South Asia. Western nationals use Dubai as a hub for the Middle East.

The UAE maintains strong financial reserves and a durable banking sector, which makes it safe for investment. According to Sovereign Wealth Fund Institute figures, Abu Dhabi Investment Authority is the largest sovereign wealth fund in the Middle East and the second largest in the world.

Government spending on infrastructure continues to receive a major injection of capital: Abu Dhabi continues to develop the infrastructure required for one of the wealthiest cities in the world, and Dubai is implementing new projects for hosting the World Expo in 2020; AED 30 billion will be spent on infrastructure at the Expo site and the city. The UAE plans to spend AED six billion on major infrastructure developments across the country, including road networks and federal buildings. The UAE is also working on the Etihad Rail project, which will offer a significant leap in land transport by year 2021.

The policy of economic diversification has led into impressive development in key sectors such as tourism, air transport, trade, financial services, manufacturing and alternative energy. The UAE has made progress towards ending its economic dependence on hydrocarbons. Oil industries accounted for around 30 per cent of GDP in 2014, down from 79 per cent in 1980.

The UAE has a series of multi-specialty free zones with various types of economic incentives, like exemption from corporate taxes and import/export duties and full foreign ownership with 100 percent profit repatriation. 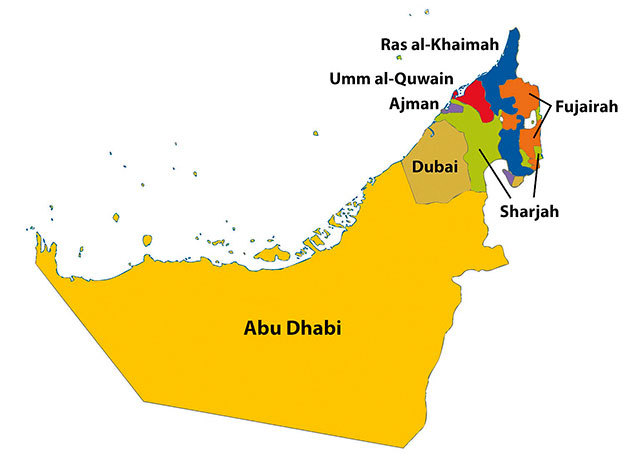 Abu Dhabi: Civilisations in Abu Dhabi date back to the third millennium B.C.; Umm Al Nar island and Jebel Hafeet, in particular, are sites of great archaeological importance. Abu Dhabi is the largest of the seven emirates and makes up 87 per cent of the entire country. 70 per cent of Abu Dhabi is an open desert. It is the world’s eighth-biggest producer of oil. Abu Dhabi has 95 per cent of the nation’s oil reserves and about 94 per cent of gas reserves.

Dubai: Dubai was established in 1833, when some 800 members of the Bani Yas tribe, led by the Maktoum family, settled by the Dubai creek. Dubai is the second largest emirate with an area of 3,885 square kilometres. Dubai’s economy relies on trade, services and finance sectors. The GDP reached around 338 billion AED as of last year.

Sharjah: Sharjah’s history dates back 6000 years when people engaged in trade and pearling. The Al Qawasim tribe has been ruling Sharjah since 1760. Sharjah has a diversified economy, with gas, tourism, education, healthcare and logistics being the key contributors. GDP reached 114 billion AED in 2016. Sharjah is also known for its touristic sites, such as Heart of Sharjah, Al Qasba Centre and Al Majaz Waterfront.

Ras Al Khaimah: The emirate is famous for its historical antiquities such as the Fort of Dhayah, the palace of Al Zabaa and the antiquities of Julfar city. Ras Al Khaimah has been witnessing a wide expansion in its economy marked by the recent establishment of free zone areas. It runs two vital industries: the cement industry and the pharmaceutical industry.

Ajman: Ajman was formed by the Al Nuaimi tribe, that migrated to the region around 1775. Ajman is the smallest of the seven emirates and covers an area of 260 square kilometres. Currently, Ajman city ranks third among the emirates in industrial development. It is known to have the largest shipyard in the country. Ajman Port and Ajman Free Zone are two key players in the economic growth of the emirate.

Umm Al Quwain: The emirate has rich coastal mangroves on the coast of Arabian Gulf and many islands that lie to the east of the mainland. The biggest island is Al Seniah, which is home to Arabian gazelles, falcons and turtles. Fishing is a key contributor to the economy of Umm Al Quwain.

Fujairah: Fujairah’s modern history began in 1808 when Sheikh Mohammed bin Mattar, leader of the Sharqi tribe, built a castle and the old city surrounding it. Fujairah is the only emirate that is located along the Gulf of Oman. The emirate’s economy relies on trading, manufacturing, ships supply services, transport, storage and agriculture.