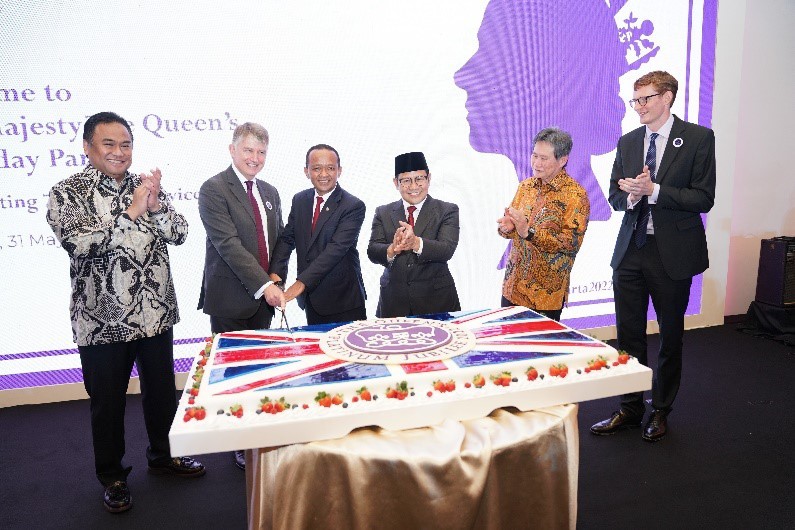 Her Majesty the Queen’s Birthday Party was held in Jakarta on the evening of 31st May – for the first time since 2019 due to the COVID-19 pandemic. The celebration was even more special than usual because it is HM The Queen’s Platinum Jubilee year – 70 years on the throne. For the first time at the QBP, the UK now has two Ambassadors in Jakarta acting as hosts – Owen Jenkins, Ambassador to Indonesia and Timor Leste; and Jon Lambe, Ambassador to ASEAN. 10 piece band from the Nottinghamshire Band of the Royal Engineers and Indonesian rock band Centre Stage performed at the event, with more than 700 people attending. Embassy Wall in Patra Kuningan is now lit with purple lights to celebrate the 4 day weekend.

More than 700 people – mostly Indonesians and Brits, came together on Tuesday night at the Ritz Carlton, in Mega Kuningan, Jakarta to celebrate the UK’s thriving relationship with Indonesia and with ASEAN, and both Her Majesty Elizabeth II’s birthday and 70 years of service.

Guests were entertained with British food and beverages, with traditional classics like Fish & Chips and Roast dinner served alongside Curries and Daal - dishes brought to the UK by the unlimited migration from Commonwealth countries between the years 1948 and 1962 – which saw the UK transformed by migrants from India, Pakistan, the Caribbean and many more. British desserts and cheeses were laid out for guests – including Sticky Toffee pudding, Eton Mess and Bread & Butter pudding. 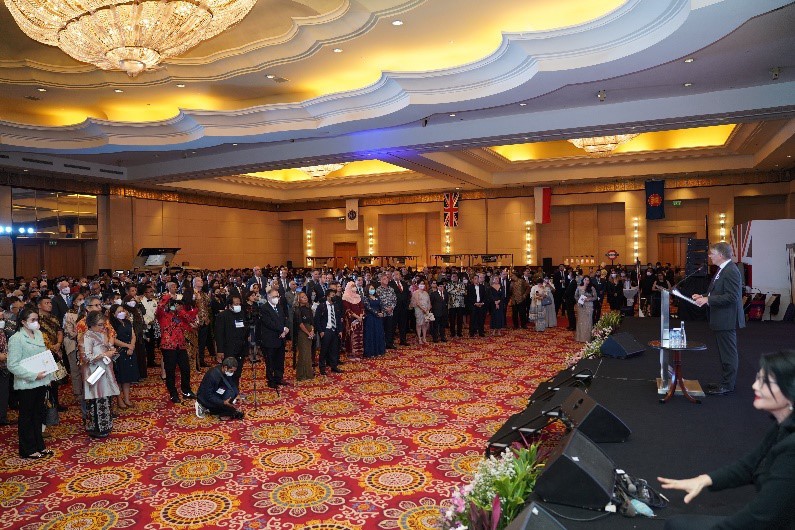 Guests were able to check out a VR booth that took them to virtual experiences in the UK and earn a copy of the British Embassy’s new Tourism Guidebook;  use a 180 degrees Glam Cam to take photos; and take Lavender seeds home to plant – as part of the Queen’s Green Canopy initiative that has seen 1 million trees planted in the UK to celebrate the Queen’s Platinum Jubilee.

Guests were entertained by a 10-piece military band flown over specially from the UK to play at this event, and Indonesian rock group ‘Centre Stage’ – who played British music hits from Queen, The Beatles, Oasis, Blur, Coldplay, Ed Sheeran, Adele and more.

Guests checked out the many British and Indonesian sponsors – including AstraZeneca, Diageo, Pernod Ricard, Prudential, Kapal Api,  Wicked Pies, PwC, BAE Systems, ARUP, Airbus, MAP, Mott MacDonald, HSBC, Rolls Royce, Babcock, Standard Chartered and Unilever - many of whom had things to give away. 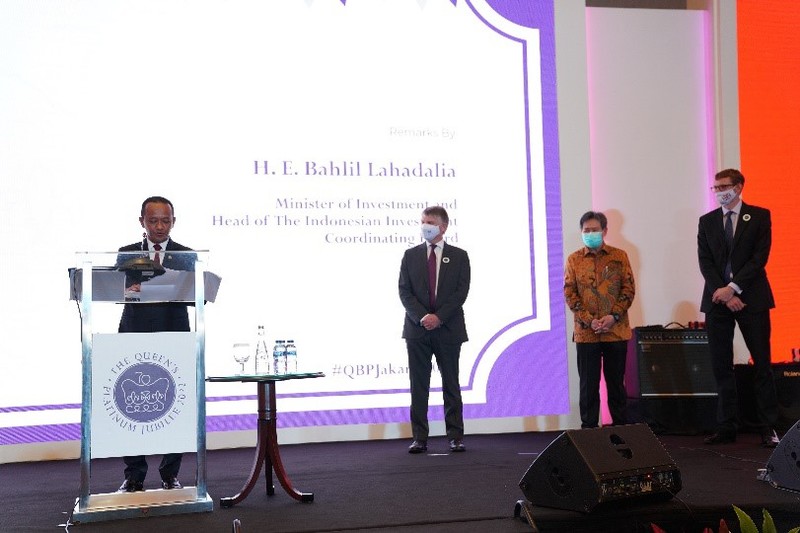 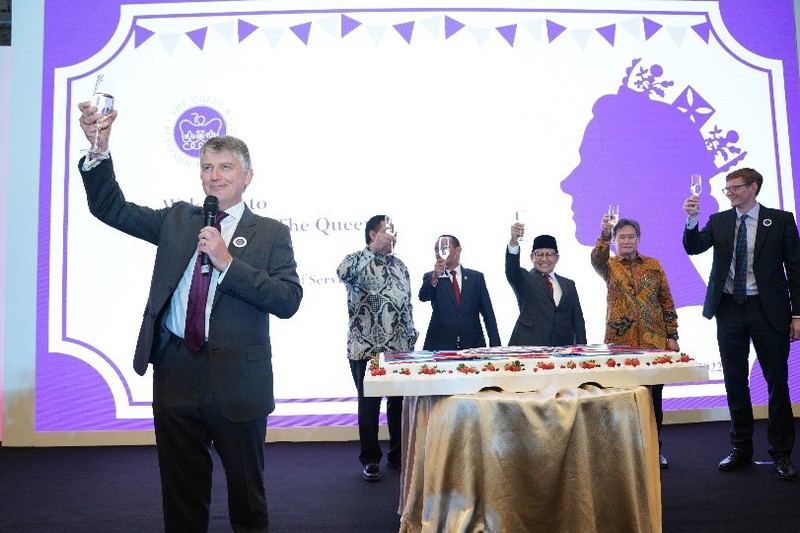 The growing global importance of Indonesia and ASEAN has long been apparent to the UK. In 2021 the UK went further - setting out its ‘tilt’ to the Indo-Pacific – putting growing relations with the region at the heart of the UK’s foreign, defence, security and development policy. Two weeks ago, the UK set out its development strategy, with Indonesia one of only a couple of countries named more than once. The UK wants to see Indonesia and ASEAN develop and grow more prosperous, and the UK believes helping countries grow will help the UK to build strong friendships around the world, in the near and long term.

In recognition of the Queen’s historic achievement, the outer embassy wall in Patra Kuningan will be lit up with purple lights throughout the 4 day weekend.

The celebrations in Jakarta are complemented by those in the UK. The UK will enjoy a one-off four day weekend, from Thursday 2nd to Sunday 5th of June, with full coverage on BBC World News. British people are extremely excited, with streets transformed for street parties, cakes baked and more...

“It’s great that after 3 years we could finally get together again, and our time apart made this gathering even sweeter. This event was a celebration of the UK and Indonesia friendship and of Her Majesty the Queen – and her incomparable contribution to UK public life.

The UK and Indonesia – two of the world’s big economic and political powers – have huge potential to work together to our mutual benefit, and to solve some of the world’s biggest challenges. The UK wants to partner with Indonesia as it develops its enormous potential and for us to go forward as friends and companions. Last night was a chance for us to celebrate and make even stronger the people to people relations that are the indispensable foundation of any friendship between nations.”

“So much has happened in the last few years, especially the UK becoming ASEAN’s newest Dialogue Partner in 2021. This was our first opportunity to celebrate that with all our friends and partners and all we have done since.

Now we are firmly focused on how we can support ASEAN and deepen our partnership. The UK is the 5th biggest economy in the world. We want to support peace, security and prosperity – in the world, and in the critically important ASEAN region.”

“We are delighted to visit Indonesia for the first time in the band’s history. It's a great honour to represent the British Army and the Nottinghamshire Band of the Royal Engineers.  Music is an international language and we hope it brought as much joy to the audience as it did to us being able to perform here in Indonesia.”