Aptly themed “Come Together”, the UK/ID Festival 2017 was a showcase of collaborative art projects from the UK and Indonesia, taking place at The Establishment, SCBD, Jakarta, from 17 to 22 October 2017. The festival, the second of its kind, is part of the three-year project “UK/Indonesia 2016-2018” which commenced during President Jokowi’s visit to UK in April 2016. 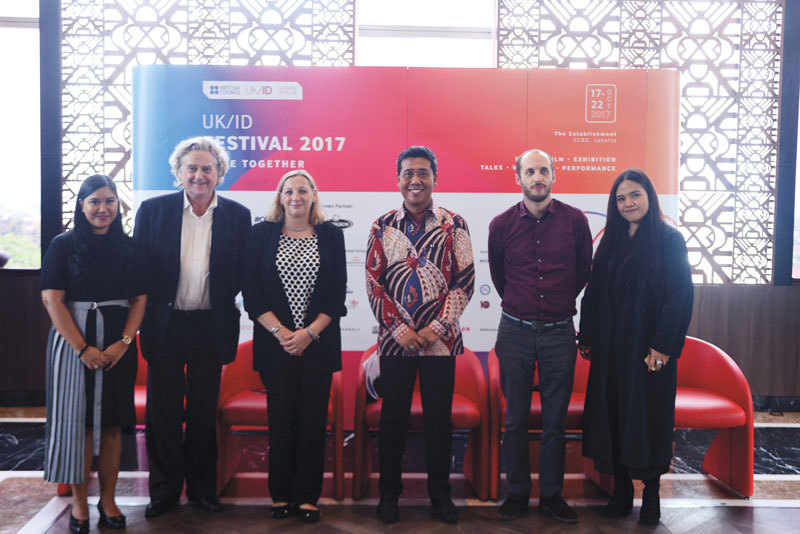 The theme “Come Together” was intended to create and expand creative connections between the two countries through residencies, networking, cultural visits and collaborations, and served as an invitation for like-minded individuals to collaborate and imagine how creativity can evolve through the sphere of art and technology.
The festival featured 32 art organisations and artists from Indonesia as well as 22 artists from the UK. Driven by growing enthusiasm seen in both countries, the British Council stands ready to raise the platform for further exchange in creativity among artists, as well as provide opportunities for artists with disabilities.

“This festival is charged by the youthful spirit of the UK and Indonesia, a celebration of the amazing things that can happen when talented people from very different origins come together to share ideas and creativity,” said Paul Smith OBE, Country Director of British Council in Indonesia, adding that the UK/ID Festival 2017 covered a wide range of events and activities such as musical performances, film screenings, performing arts, visual exhibitions, installations, talk shows, workshops and panel discussions.

As the long-standing leader in global music trends, the UK has had a constantly growing influence in Indonesia, as it does elsewhere in the world. In its role as a global art hub, the country is home to some of the best museums and art galleries in the world, spread in cities such as London, Manchester, Liverpool and Birmingham.

By introducing Indonesian art and music to the British market, it is expected that there will soon be more recognition of talents from this part of the world, and vice versa. Supported by the Indonesian Ministry of Education and Culture, the UK/ID 2017 Festival also aims to stimulate the economy of both countries as it does in the areas of culture, social development and national engagement.

“What we want to do is to establish a campaign that helps both countries collaborate, a festival to encourage and stimulate people to have more knowledge in creative industries, and most importantly, more collaborations and co-productions in the world of arts, films and music,” Smith said.

The six-day event opened with the Indonesian première of England is Mine, a biographical portrait of singer Morissey and his dream of music stardom before he went on to form The Smiths in 1982 with Johnny Marr. It was followed by a collaborative live music performance between London-based electronic musician Chloe Martini and Indonesian singer Neonomora.

The following days were equally filled with a lot of excitement thanks to the screening of 20,000 Days on Earth, a British documentary musical drama that shows the life of musician and cultural icon Nick Cave. Attendees were also entertained with a rich and intimate experience of enjoying a classic film through real-time musical scoring, through the screening of a classic Alfred Hitchcock movie, The Lodger, with live score by Sjuman School of Music.