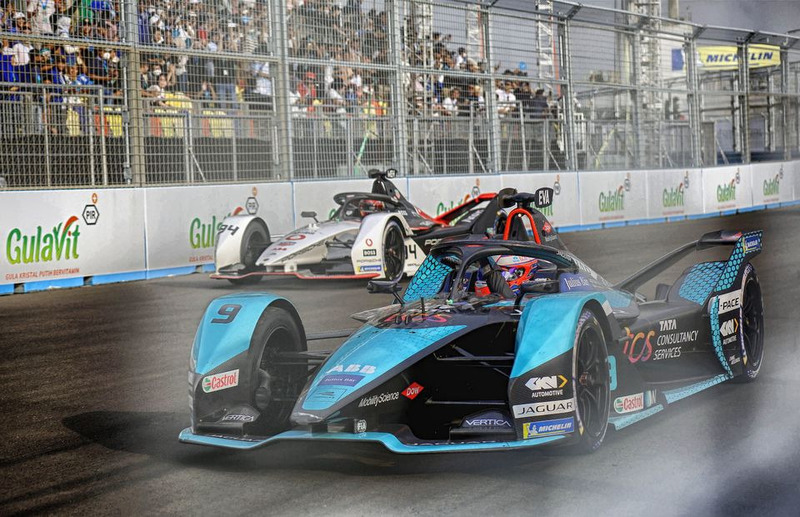 Ahead of its 495th anniversary, Jakarta’s streets was hit by the most competitive line up in motorsport battle for the first time in the series’ history. It’s 22 drivers going to wheel-to-wheel on the brand new track in Ancol, treating the Jakarta spectators  to the most electrifying form of motorsport.

Jaguar TCS Racing driver Mitch Evans beat pole-sitter Jean-Eric Vergne (DS Techeetah) to win Indonesia’s historic Formula E race at the brand new Jakarta International E-Prix Circuit last  Saturday.It’s the third win of the season for Evans, who made a crucial pass on Lap 31 to take the lead from Vergne. Edoardo Mortara (ROKiT Venturi Racing) grabbed the final spot on the rostrum and reduced the gap in drivers’ standings with the top four drivers now split within just 12 points. Stoffel Vandoorne (Mercedes-EQ) finished fifth in the inaugural race in Jakarta to retain his lead in the world championship, but Vergne is only five points behind

President Joko “Jokowi” Widodo described the race as the future of motor racing and hailed the Jakarta event as a big success. “Thankfully the event went on smoothly and well. This is an event of the future because there will be a major shift from [fossil fuel-powered] cars to electric cars,” the president said at the circuit after watching the race in full.

The Indonesian government fully supports Formula E as part of its campaign for an “electric vehicle ecosystem” where the government intends to build necessary infrastructures for the whole chains of the industry from battery production to assembly plants, said Jokowi, who joined the post-race celebration on the podium and handed the trophy to the winner.

Jakarta has been aiming to host a Formula E race since 2020 but the event was postponed twice due to the Covid-19 pandemic.

Back on 15 October 2021, Jakarta was officially appointed as the host of the ABB FIA Formula E on 4 June 2022 through a decision made by the FIA World Motor Sport Council in Paris which also ratified the race calendar for the 8th season 2021/2022. It includes Jakarta on the action for the first time in the series; history, with Indonesia welcoming FIA-sanctioned motorsports back into the country for the first time since 2006. It took just months to complete the 2.37-kilometer circuit next to Ancol Beach after the capital city was officially included in the calendar to host the ninth round of the season.

In a video shared specifically for automotive sports fans in Indonesia, Alberto Longo, Chief Championship Officer and Co-founder of Formula E, expressed his high appreciation for Indonesia's participation. Longo also emphasized the importance of the Jakarta E-Prix for Indonesia and ABB Formula E. Longo also expressed his appreciation of President Jokowi's efforts to reduce Indonesia's dependence on conventional energy and switch to environmentally friendly energy, a philosophy that is in line with FEO's view.

"Especially in realizing this philosophy and to take advantage of the global electric car trend, President Joko Widodo plans to make Indonesia a center for the production of electric cars and car batteries," said Longo.

While congratulating Governor Anies Baswedan for linking Formula E with the Jakarta Langit Biru ( Jakarta Blue Sky) program to create clean air, Longo commented, “Governor Anies sent a message that shifting private vehicles to public transportation and promoting the use of electric cars are one of several steps that will be taken. taken. This is a cross-generational effort, and Formula E will help to embrace the participation of young people and millennials.”

Entering the 8th racing season, Formula E will be present in iconic cities in the world, including Diriyah (Saudi Arabia), Rome, Monaco, Berlin, Vancouver, New York, London and Seoul. Jakarta E-Prix 2022, was the first racing event, of three races that will be held in succession.

The acceleration of the construction of the Jakarta E-Prix 2022 circuit track in the Ancol area, North Jakarta was carried out in detail and participated in the checking or quality control phase with the FEO to ensure the quality of international racing tracks according to the standards set.

Meanwhile, the strategy in pursuing development targets was conveyed during the last field visit with journalists that the toughest part of this construction was carried out in the initial phase, such as hardening the soil in Zone 5. “The hardening implementation in zone 5 has been completed, and now we entered the entire finishing process simultaneously, where the first asphalt layer was 100% reached throughout the zone.” explained Irawan Sucahyono as VP Infrastructure & General Affairs Jakarta E-Prix 2022.

The Ancol Formula E circuit has a track length of 2.4 kilometers with a width of 12 meters and is designed to have 18 corners, with the Formula E drivers driving the circuit with a design like a traditional lumping horse in a clockwise or clockwise direction.

The Formula E event is intended to uphold the principle of environmental sustainability, from the very beginning of the development until the time of the event. As many as 114 trees affected by the construction have been relocated to the area along the Ancol guardrail. The relocation period for this tree is 7-10 days using the live transfer technique. That is, the tree that is moved is kept alive.

Formula E is also the first sport in the world that has a commitment to keep global warming at less than 1.5°C per year. "Formula E will further reduce its emissions by 45% by 2030. Therefore, the circuit that we created is also very concerned about the sustainability of the surrounding environment, including relocating the trees," he added.

Of course, despite is success as a race, and even its well-intentioned sustainability credentials, the event still has many critics who argue that this was not a priority for Jakarta where there is still water crisis, and a major and yet unsolved waste challenge. In fact some observers cite the lack of sidewalks on the majority of non-city centre roads  as a much better use of the people’s taxes.