A Firework of Flavours at AMUZ Gourmet

What happens when two French chefs, one based in Jakarta and the other one in Tokyo, meet for a culinary exchange? The answer is simple: a firework of flavours!

Chef Gilles Marx, founder of AMUZ Gourmet in Jakarta, and French Michelin Star Chef Olivier Oddos come together in the Big Durian from 6 to 9 February for a unique collaboration. Over the course of three days, they host cooking classes, gourmet lunches and dinners, a premium Champagne dinner - “in France, we always drink champagne when we want to celebrate something, so the Champagne dinner is a way to celebrate our collaboration,” said Chef Gilles - and an exclusive 4 Hands Wine Pairing Gala Dinner on 9 February.

“This collaboration aims to showcase French cuisine, but it is also about bringing different countries together,” Chef Gilles explained. “We can learn from each other and also have the chance to introduce our staff and of course our customers to something different and new.”

Originally from Alsace in France, Chef Gilles became interested in the culinary world from an early age and started to work in restaurants during his teenage years. After honing his skills in Alsace, Lyon, Burgundy and Paris, as well as Australia and Southeast Asia, he eventually landed in Jakarta and opened his successful French fine dining restaurant AMUZ.

Chef Olivier, on the other hand, was born in 1970 in Bordeaux, France and made his fist foray into the culinary world at the age of 16 and worked at numerous Michelin-starred restaurants. In 2000, he moved to Japan to work as a cooking instructor for French restaurant Le Cordon Bleu, and eventually opened his own restaurant, Chez Olivier, in Tokyo in 2009. 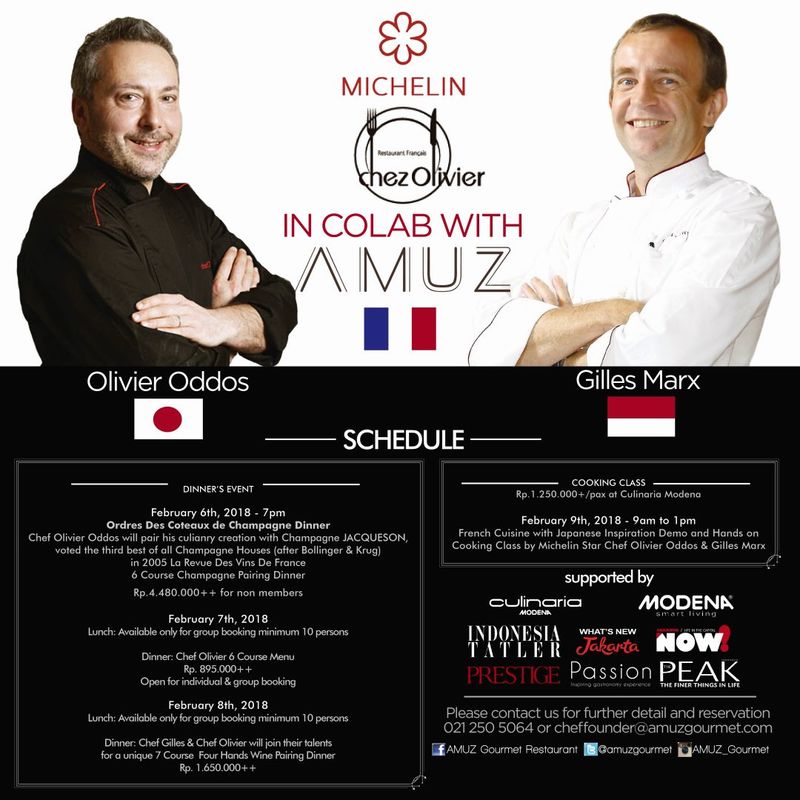 “I have lived and worked in Japan for 18 years, but this is my first time in Jakarta, and I’m very happy to be here,” Chef Olivier said.