Which great musical or literary figure has never produced a work inspired directly or indirectly by Goethe’s Faust? Heinrich Heine, has been quoted as saying that every person should write a Faust, and he did write his. Beethoven, Wagner, Berlioz, Schumann, Lizst, Sarasate all did too,  and the list goes on. The first written record of the name Faustus can be traced back to the fourth century BC, and although Goethe’s Faust is quite undoubtedly the most famous, the story of one who sells his soul to the Devil is perhaps as old as humanity’s belief in heaven and hell and their respective patrons. 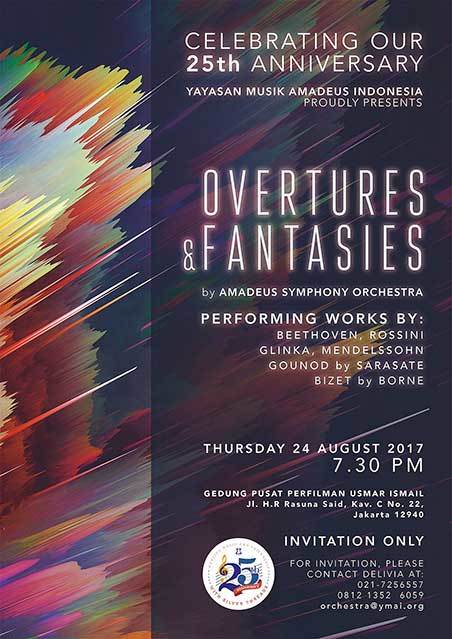 This month, Jakarta’s music connoisseurs can listen to Pablo Sarasate’s take on the theme in his Nouvelle fantasie sur Faust. The work is based on Charles Gounod’s grand opera, Faust, the libretto of which is loosely based on Goethe’s Faust. That’s a lot of fuss over Faust. It will be performed by violinist Clara Soedargo and the Amadeus Symphony orchestra. The theme of the concert’s program is Overtures and Fantasies, and includes works by Beethoven, Rossini, Glinka Mendelsohn, and Borne. The soloist performing Borne’s Fantasy on Bizet’s Carmen is the young and talented flautist, Emma Louise Hochschild, first prize winner at the 2012 and 2013 Jugend-musiziert competition in Germany. All in all, a highly recommended concert.

The next concert features a masterpiece in progress, kind of like Goethe’s Faust when the first scenes were published in 1790 with the explicit subtitle “fragment”. Ananda Sukarlan’s new work, commissioned by the Australian government through its embassy in  Indonesia takes its title from Campbell Macknight’s book “A voyage to Marege’”. This new work tells the story of the voyages of Makassar fishermen to the shores of the Northern Australian coast in search of  trepang  (sea slugs), their contact and subsequent cultural interaction with the indigenous Aborigine people there during the end of the eighteenth century. The ‘fragment’ that will be premiered on this occasion will be approximately 25 minutes and will feature elements of Makassar and Aborigine traditional music, with a special appearance on the digeridoo by multi-talented Aborigine performing artist, Djakapurra Munyarryun. The full work will be premiered at the Darwin International Festival in August next year. Ananda’s creative process for this special work included travelling to Nhulunbuy, home of the Yolngu people, living there for a week while absorbing their cultural heritage, their history and learning their beliefs. This may seem a relatively short amount of time, however Ananda’s relationship with Australia is as old as an average millennial, having been the dedicatee of works by some of the country’s most important composers such as Betty Beath and Peter Sculthorpe. He will perform one piece by each composer on this occasion, namely Beath’s “Merindu Bali”, and Sculthorpe’s “Small Town”. Topping it all off is the young talented pianist Janice Wijaya performing songs by Ismail Marzuki arranged by Ananda Sukarlan into a masterpiece for solo piano and orchestra titled “Fantasia Pianistica Marzukiana”. Being a gift a from the Australian Embassy on the occasion of Indonesia’s Independence Day, the concert is free of charge. What excuse is ther not to go? 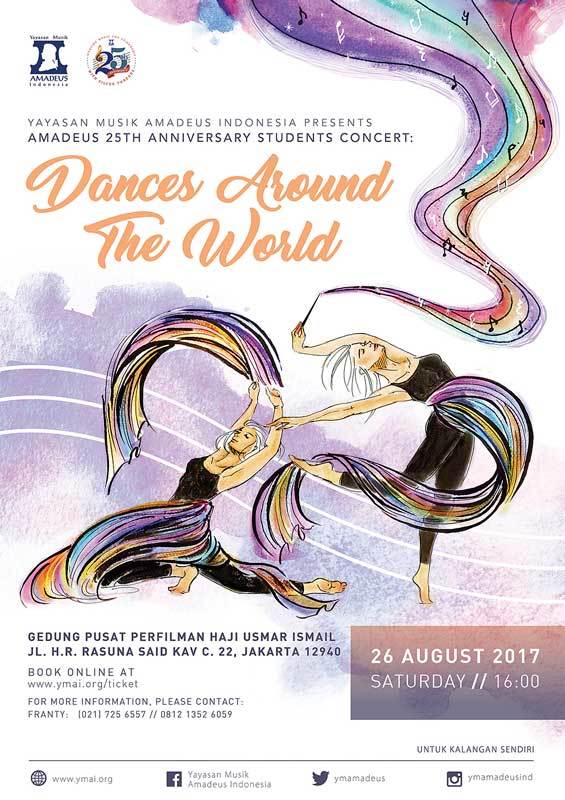 Last but not least is a concert that would be especially great for kids. Celebrating their 25th anniversary, Amadeus Music School presents “Dances around the world” featuring works by  Ravel (Bolero), Scott Joplin (The Entertainer), Tchaikovsky (Trepak) and a hole lot more. If I had to name just two best music schools in Jakarta, Amadeus Music School (AMS) would be one of them. This concert showcases their best students and the full range of instruments offered from piano, guitar, strings, woodwind, brass, percussions, harp, to voice. This may be a ‘student’ concert, but with AMS, don’t expect the quality of a typical school play. Perhaps the best way to get kids interested in music, or any activity really, is to watch their peers doing it very well. So, if you got kids, this could make for great fun for the whole family.