Jakarta Concerts in May

It may be interesting to note that a “historically accurate” performance of Beethoven’s Piano Concerto no.3 in C minor opus 37 entails the pianist to perform from memory, reading a mostly empty score containing what appear to be Egyptian hieroglyphs here and there, serving as clues intelligible only to the performer while giving secret glances at the end of the invisible passages to the panicking page turner whose anxiety over missing the decisive moments can barely be contained. Apparently, that is how Beethoven and Ignaz von Seyfried did it. Amusing anecdotes aside, this month’s program at the Aula Simfonia Jakarta is not to be missed. 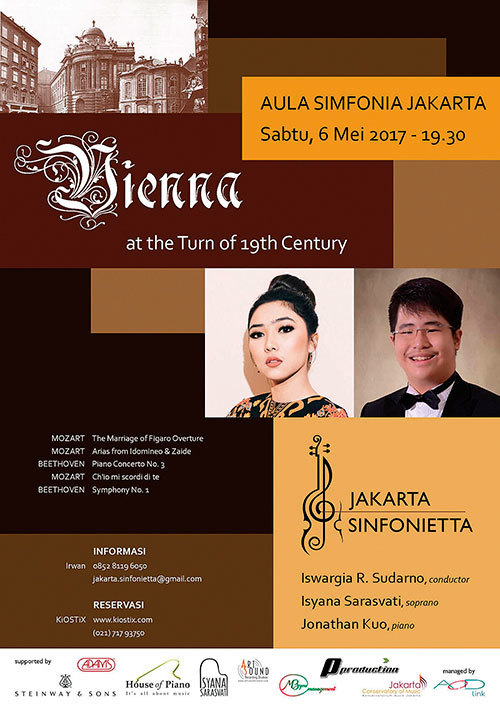 The first concert will consist of works by Mozart and Beethoven, performed by Isyana Sarasvati (soprano) and Jonathan Kuo (pianist) with the Jakarta Sinfonietta orchestra conducted by Iswargia Sudarno. The orchestra will open with the ouverture from The Marriage of Figaro by Mozart and close with Beethoven’s Symphony no.1. Isyana’s program will consist of selected arias from two of Mozart’s operas Idomeneo and Zaide. Jonathan Kuo will tackle Beethoven’s third piano concerto.

The next concert contains works that are quite rarely performed here in Jakarta. If you watch enough TV sports, particularly football, and listen to enough rock music, then you are most likely familiar with some excerpt or some version of Aaron Copland’s Fanfare for The Common Man. This would be a great chance to see the original performed live. In fact, each of the works that will be performed provide enough reason to attend this concert. Even to the avid fan of Western art music, Carl Reinecke’s Flute Concerto in D major opus 283 will likely make a fine discovery. 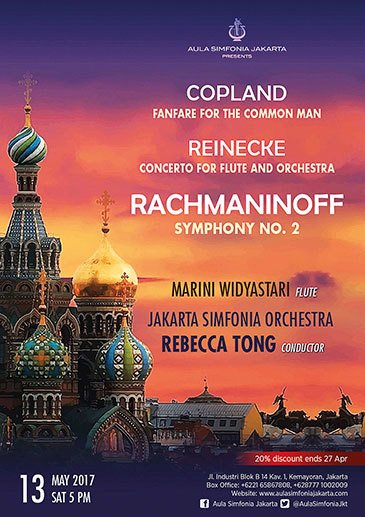 A well-respected academic and conductor during his lifetime, he spent a large portion of his life as conductor of the Gewandhaus Orchestra and director of the Leipzig Conservatory. He was on good terms with the biggest names of his day including Mendelssohn and Schumann. During a brief stay in Paris, he even gave lessons to one of Franz Liszt’s daughters. At the time, some critics referred to the work as basically good but not great, criticizing the style as being dated, though it seems apparent that what was dated yesterday can become timeless tomorrow.

Like Reinecke’s flute concerto, Rachmaninoff’s Symphony no 1 suffered criticism, only much more severe. Fortunately, he bounced back, as if the opinion of critics matter, with Symphony no 2, which became one his most celebrated works. This is a massive work, an average performance lasting roughly an hour if uncut. Worth every minute.

The soloist is Marini Widyastari, perhaps Indonesia’s most wellknown flautist. Since completing her studies at the Royal Northern Conservatory of Music in 2008, she has performed regularly with the best orchestras in the country. She is currently a member of the Jakarta Simfonia Orchestra, which on this occasion will be conducted by Rebecca Tong.