Once upon a time in a faraway land, there appeared a story in La Revue des deux mondes, originally founded as a bi-weekly travel journal depicting lands faraway. The title was Carmen, the writer was Prosper Mérimée. 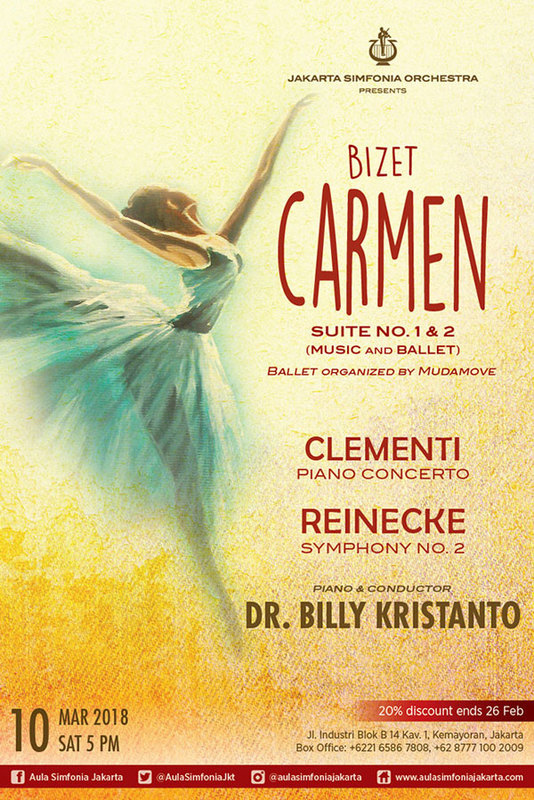 He recounts a journey to Spain, observing exotic cultures and landscapes of which Parisian readers were fond. Carmen’s appearance is delayed till the second chapter,  and the drama with which we have become so familiar, unfolds in the section after.

‘Twas mainly this part, thirty years later which inspired the libretto by Henri Meilhac and Ludovic Halévy, with music by Georges Bizet, a then soon-to-be great French composer and the role of Carmen sung by Célestine Galli-Marié. Initially shunned by the Paris audience of the Opera Comique, it quickly found favor in many lands far and foreign. Alas, more poignant than the fictional fate of the heroine, was the untimely death of Bizet, the man in whose mind this operatic masterpiece was born in.

Many works have since been based on the opera, including the two Carmen Suites compiled posthumously by Bizet’s friend, Ernest Guiraud. This will be performed by the Jakarta Simfonia Orchestra conducted by Dr. Billy Kristanto in a concert, which also features Carl Reinecke’s second symphony, Muzio Clementi’s sole piano concerto, to be performed by the conductor. Interestingly, the Carmen Suites will also feature a ballet performance.

Of course, Bizet’s music has been used as the basis for several important ballets over the past century, perhaps most famously Rodion Shchedrin’s one-act ballet for then prima ballerina assoluta of the Bolshoi Ballet, Maya Plisetskaya. It does not seem that the added ballet in this event has anythng to do with that though, as different music entails different choreography. Hopefully the visual spectacle will serves the piece well. 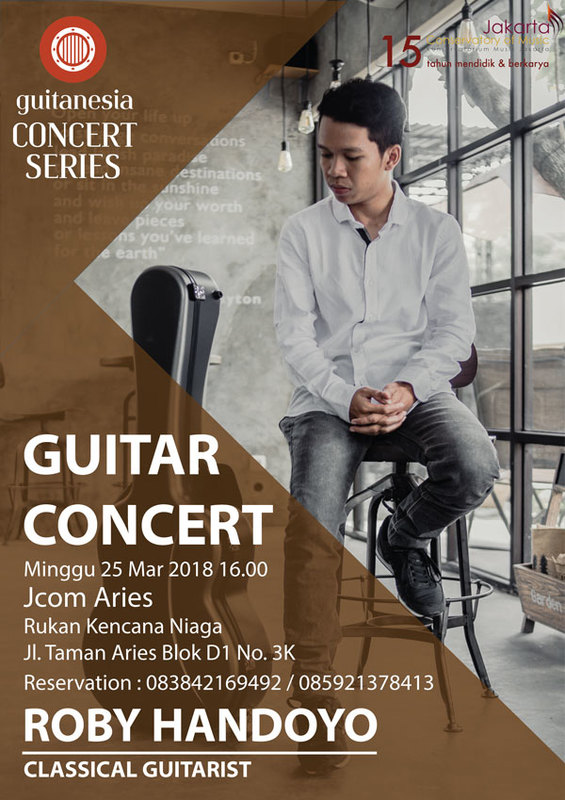 The future of Indonesian classical guitarists is set to become brighter with the newly founded Guitanesia taking upon itself the task so far ignored by local guitar schools and concert organizers: promoting Indonesian guitarists in their own country.

The first concert will feature one of the most talented classical guitarists in Indonesia today, Roby Handoyo. Aside from masterclasses with Pablo Gonzalez (Spain) and Augustin Pesnon (France), Roby’s talents as of yet are purely home-grown almost solely around Yogyakarta. However, his 2017 achievements alone include first prizes in the Jakarta National Guitar Competition and Tarrega Malaysia International Guitar Festival. The balanced program will consist of serious repertoire such Variations sur un theme de Scriabin (Tansman), Fantasie Dramatique (Coste), and Rito de Los Orishas (Brouwer) as well as some lighter pieces and two premieres of works by Indonesian composers Bakti Setyaji and Aldo Achmad.