Although today some may criticize Nikolai Rimsky-Korsakov’s 1886 arrangement of Modest Mussorgsky’s 1867 tone poem which we have come to know as Night on Bald Mountain, the truth is our interest in the original might have never been without the latter. Some musicologists such as Gerald Abraham have gone so far as stating that the arrangement is in fact a composition by Rimsky-Korsakov based on a work by Mussorgsky, which is a bit like saying Rimsky-Korsakov wrongly credited the work.

Considering the fact that even published works have been known to be revised, imagine how fluid works can be in the hands of their composers while they remain unpublished. The first mention of actual work on this tone poem is generally considered to have occurred in a letter from Mussorgsky to Mily Balakirev in April 1866 in which he wrote “I have started sketching ‘The Witches’. Satan’s train does not satisfy me yet.” ‘The Witches’ was a nickname he had given to his Bald Mountain music probably in reference to an earlier unrealized project for which he was commissioned to write one act of an opera on the subject of a witches’ sabbath.

We know from his letters to Rimsky-Korsakov and Vladimir Nikolsky that he completed the scoring of this work on the eve of St. John’s Night (June 23) in just twelve days and without any rough draft – an achievement he mentions with pride, repeatedly thanking God for it. So pleased was he with what he by then had titled St. John’s Eve on Bald Mountain, that he declared in his letter to the former: “Let it be clearly understood, however, that I shall never start remodeling it; with whatever shortcomings it is born, with them it must live if it is to live at all”. Nevertheless, the crushing criticism he later received from Balakirev regarding the work compelled him to reconsider his initial stance. In fact, Rimsky-Korsakov’s version of Night on Bald Mountain is mainly based on Mussorgsky’s second attempt at remodeling the work as The Dream of the Peasant Lad from his opera The Fair at Sorochyntsi, which remained incomplete at the time of his death in 1881.

In any case, we have been left with various versions of truly exhilarating music and it is the Rimsky-Korsakov version that will be performed by the Bandung Philharmonic this month under the baton of Robert Nordling. In addition to this and some works perhaps more familiar to Jakarta concert-goers such as Grieg’s Peer Gynt Suite no.1 Op. 46 and Smetana’s The Moldau, the program also includes the world premiere of Krakatoa: Concerto for Viola and Orchestra by multi-award-winning composer Stacy Garrop, featuring Chicago-based violist Michael Hall. Interestingly, if I’m not mistaken, the higher up Krakatoa you go, the balder it gets.

Take a break from the flood (of) achievements by Jakarta’s current administration for a weekend of great music in Bandung.

If a fresh and daring program of Mussorgsky, world premieres and Indonesian composers is too much excitement or just not what you are looking for, you can opt for a concert with a more traditional program right here in Jakarta. Make no mistake. Traditional is great, especially when it consists of Beethoven’s Symphony no. 4, and Haydn’s Symphony no.100 “Military”, among others. A particular point of interest might be the opening work, Toy Symphony by Leopold Mozart. You know, the father and teacher of Wolfgang Amadeus? Ringing in the new year, Stephen Tong will be conducting the Jakarta Simfonia Orchestra at Aula Simfonia Jakarta. 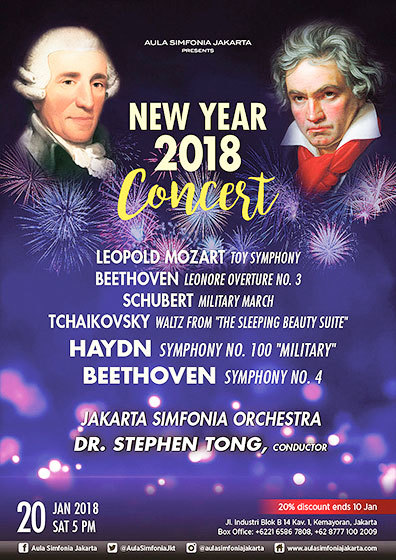