Jakarta music lovers are in for a treat thanks in part to the Jakarta Simfonia Orchestra’s courage to tackle Schubert’s challenging Symphony No.9, called the ‘Great’ for good reason. 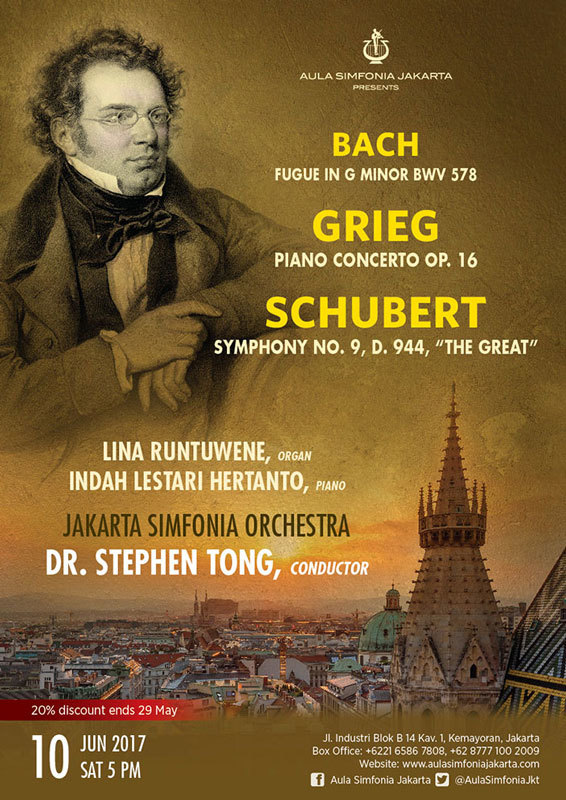 The Fugue in G minor BWV 578 belongs to Bach’s Arnstadt-Muehlhausen years (1703-1708). Some of the most amusing events in his life occurred during this period. In 1705, he had a scuffle with bassoonist Johann Heinrich Geyersbeer who accused Bach of insulting him. Threatened with a stick, Bach drew his sword. What was he supposed to do? Time out and run around in search of an equal-sized stick? Well, shortly afterward he did take a time out in the form of a leave of absence. He went north to Lübeck, a 260-mile journey he is said to have made on foot. He probably also wanted to explore the possibility of replacing the great soon-to-retire organist. The competition would be tough as it included Handel and Mattheson. Ultimately none of them were able or willing to meet the main requirement, which was for the successor to marry Buxtehude’s daughter. Ten years his senior, she would have been only thirty, but as musicologist Malcom Boyd puts it, she was of “unprepossessing appearance”. In 1706, he was accused of admitting an “unauthorized maiden” into the choir loft. Some historians claim she was Bach’s future wife Maria Barbara, which when you think about it, is so romantic. Music from this period of Bach’s life has its own unique charm among his vast output throughout his lifetime.

If you are ever in need of inspiration and can afford the trip, consider spending a summer vacation visiting the Mothsgården in the Danish village of Søllerød, where Grieg composed his Piano Concerto op.16 in 1868. Upon discovering 15-year-old Grieg’s talent, the renowned Norwegian violinist Ole Bull advised that he be sent to the Leipzig Conservatorium to train as a musician. Were it not for this, we might not have his masterpieces as he might have ended up pursuing his childhood ambitions of becoming a pastor, a prophet, or a herald. Grieg was among those composers who were appreciated during their lifetime, receiving many awards and stipend as well as honorary doctorates from Cambridge and Oxford. His fame reached across the Atlantic with invitations to perform in the United States, which he consistently declined due to susceptibility to sea sickness. He probably would have obliged had his stipulation of a guarantee that “the Atlantic would behave itself” been met, or had commercial transatlantic flights existed thirty years earlier - though he might have then developed air sickness.

Schubert’s Syphony no.9 in C major seems to also be a product of a summer vacation. It has been known as no.7, no.8, as well as the ‘Gmunde-Gastein’ Symphony in reference to the location of its inception. The most fitting description is of course, the ‘Great’, as opposed to the ‘Unfinished’ Symphony no.7 in B minor and the ‘Little’ Symphony no.6 also in C major. Among the things that make it great is, as Schumann put it, its “heavenly length”.

The second concert features some of the most talented young Indonesian pianists. The core programme consists of works by renowned Indonesian composer Ananda Sukarlan. Anthony Hartono won 1st prize at the 2014 Ananda Sukarlan Award piano competition. After winning 1st prize at the 2014 Kosciuszko-Chopin Piano Competition, Edith Widayani recently won 1st prize at Arnuero International Chamber Music Competition this year on top of earning her Doctor of Musical Arts in piano performance at Eastman School of Music. Randy Ryan, the youngest of the three, will begin his graduate studies at the world-renowned Peabody Conservatory after having successfully completed his undergraduate degree at Juilliard.