Too Clear for Words

“I can no longer tolerate the ‘Reformation’ Symphony, and of all my compositions it is the one I would most like to see burnt. It will never be published.” Such were Mendelssohn’s sentiments and prediction regarding his D Minor Symphony Opus 107, expressed in his letter of 1838 to Julius Rietz, his successor as Municipal Music Director in Düsseldorf. 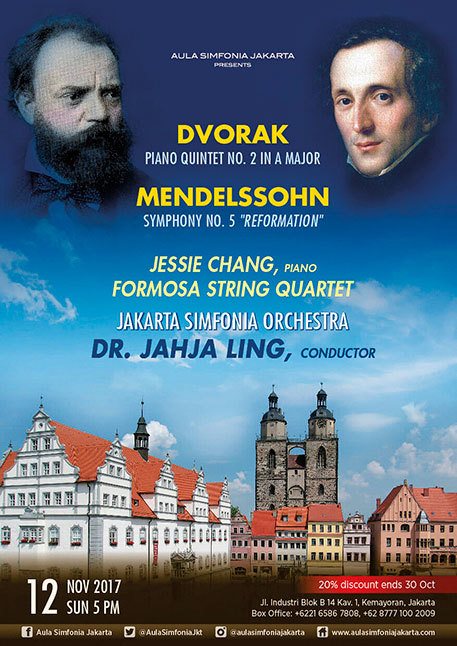 Renowned musicologist and Mendelssohn expert Wolfgang Dinglinger convincingly points out among other things, that Mendelssohn himself felt that the work had failed its programmatic goal. Among the reasons given are the composer’s decision in 1832 to delete a twenty-eight-bar passage connecting the last two movements, and the 1938 performance of the work conducted by Rietz which was given under the strict stipulation that the programmatic title not be used perhaps for fear of exposing the music’s failure to unambiguously portray its intended purpose, and if so, this could be perceived as an admission of such failure. Clarity was important to Mendelssohn, as he explained to Marc-Andre Souchay in 1842: “What the music I love expresses to me is not thoughts too unclear for words, but rather to clear”.

Mendelssohn completed the ‘Reformation’ Symphony just a bit too late for the 1830 tercentennial of the Augsburg Confession, at which he hoped it would be premiered. He was just 21 when he composed the work, which he began in 1829, and was perhaps particularly susceptible to external criticism, let alone internally. Indeed, the work suffered further rejection over the next two years unable to get even a hearing in Leipzig and Munich, then turned down by Habeneck’s orchestra in Paris even after a hearing, which probably hurt much worse. Perhaps he was burdened by the success of his earlier contribution to programme music, the Overture to Shakespeare’s A Midsummer Night’s Dream Opus 21, and felt that the initial rejections of the symphony signified a failure.

Considering that the deletion came in 1832, one wonders if it was based more on his perfectionism or rather a weakening in conviction, which would later be regretted. The deleted passage contains among other things a lengthy flute recitative perhaps alluding to the musician side of Martin Luther who was known to play the flute. Some have speculated that if only the symphony had since been performed in its unrevised version, it may have escaped the composer’s disdain for it.

As you attend the performance of this symphony by the Jakarta Simfonia Orchestra under the baton of renowned conductor Jahja Ling at Aula Simfonia, listen for the Dresden Amen at the beginning. Brace yourself for possible tears as the first violins enter at the start of the third movement. Familiarize yourself beforehand with the hymns ‘Ein feste Burg ist unser Gott’ which you may already know as A Mighty Fortress is our God, as well as ‘Allein Gott in der Höh’ sei Her’ and see if you can recognize them. Most importantly, start by forgetting any linkage between the work and its title asking yourself only at the end if the work served its intended purpose or not.

The first half of the concert will feature Dvorak’s Piano Quintet in A major performed by Jessie Chang and the Formosa String Quartet.

The Embassy of Italy in Jakarta and the Italian Cultural Institute in collaboration with Ciputra Artpreneur will present a tribute to one of the most beloved voices of the latter half of the twentieth century, Luciano Pavarotti. Fittingly titled Pavarotti Forever, it will feature young talents particularly those making their way around the Italian opera circuit such as Jenish Ysmanov (tenor), Alin Stoica (tenor), and Ana Petricevic. It seems though that the main starlet will be Elisa Balbo. She performed under the baton of iconic conductor Ricardo Muti during the 2015/16 season and was chosen to perform alongside Andrea Bocelli during his world tour in the following season. They will be accompanied by Paolo Andreoli. Keep your ears open for the others as well though as they might surprise you, particularly Ana Petricevic.